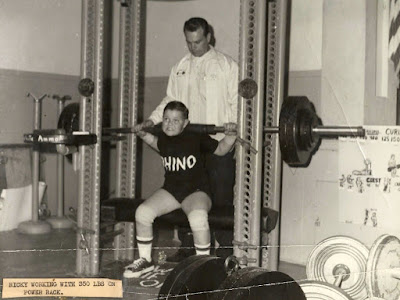 This author's first encounter with the concept of off-season training for powerlifting came from an old Muscle Builder/Power magazine. In that particular issue was an article on the squat training of record holder of that day, George Frenn. The photo accompanied the article was of Frenn squatting a massive 853 at 242. That bending bar and Frenn's grimace is still sharp in my mind.

In that article, Frenn outlined the off-season training regime he used to squat that incredible weight, which would be fantastic even today with all the new squat suits and knee wraps. George's off-season routine included front squats and box or bench squats. After a steady diet of these, he would transfer over increased power to his competition squat. Sounds reasonable.

But this article is not about George Frenn's off-season squat routine or any other superstar's secrets. It's about the transition of going from an off-season routine to specific contest training. It's not as easy as one day doing front squats or stiff legged deadlifts and the next going to your normal squat stance or sumo deads. Exercises or techniques used during the off-season can very greatly from contest methods. If one does not follow an organized, well thought out transition to contest training, the results could be less than expected, or, at worst, lead to injury.

Let's explore each lift's nuances and how the transition can be made smoothly and effectively.

The squat's first. Let's say your off-season work revolves around high bar, close stance squats. The execution of this type of squat may be similar to contest style, but the leverages are vastly different and this difference can be even greater if you use a wide squat stance. If you went cold turkey from close stance to your regular stance, you might have problems with depth perception and balance and control of the bar during the descent and ascent of the lift. This could cause you to lose confidence in your abilities and may lead to you thinking your time devoted to off-season training was counterproductive. You may even squat less than you could before you started all this off-season stuff. At worst, you could hurt yourself and suffer a real setback.

One way to achieve this transition smoothly is not to increase the weight used in the early stage of contest training by a large amount, and allow a short time of adjustment. In addition, reps should remain the same for a short while. Let's look at the last few weeks of a lifter's off-season phase and what the first few weeks of his contest phase could look like to accomplish this.

In this example, the lifter uses the same weight on Week 1 of his (competition stance) contest phase as the last week of his (close stance) off-season phase. He also uses the same rep scheme. This will not create such a noticeable change in his workout. The first workout should be moderate to reacquaint the lifter with his normal technique. Increase 10 lbs. the next week (Week 2), keeping the reps the same. On Week 3, increase weight and drop the reps by 2. By this time, most lifters will be adjusted and can proceed with more weight increases and rep changes. Of course, your actual routine may differ from my example. Just remember to keep the increases in weight and decreases in reps small at first.

Another method is to include a set of your normal competition squat style in your off-season routine. This way, you will never really lose the feel and groove of your normal style. This set can be done as a 'down' or final set after your chosen off-season work. Don't go overboard, though, on the weight or sets. Just one light set to keep the groove will help without risking overtraining. Keep the reps between 6 and 12. You may want to just include this set the last 3 to 4 weeks of your off-season. My slow work-in example in the previous paragraph can also be applied here.

The bench press can be addressed in much the same way. Going from dumbbell benches, or close grips, for example, to your competitive mode will take some getting used to. You must readjust to your back arch and foot position. The balance of the bar will seem strange at first. Ease back into your old grip if you went wide, otherwise could pull something.

Conventional deadlifters will transition much easier than sumo pullers. Sumo pullers must regain flexibility and technique to pull effectively. I would suggest including a sumo set the last 3 to 4 weeks prior to starting the contest phase.

An experienced lifter should require less adjustment time to get back into the contest groove. Novice and intermediate lifters should go slower. Have someone assess your technique when you switch over and don't increase weight until you get your technique back in line.