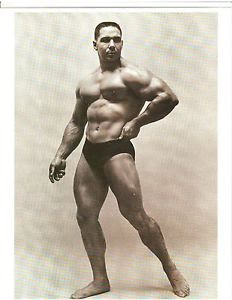 Of all the muscle groups of the upper body, the deltoids are the most important in my mind because of the width and thickness that they lend to the upper body when well developed. Could you possibly imagine Bill Pearl without his gigantic delts? If you can, you will see in your mind's eye a physique that is considerably less impressive than what is currently the best build in the universe. By the same token, I can think of several also-ran bodybuilders who would be on the top of the heap today if they could pack on a little more deltoid muscle.

Anatomically, the deltoid is a rather complicated muscle that can move the arm in many directijons. This triangular shaped cap over the point of the shoulder takes its name from the Greek letter delta. It has three sections (or heads) that help move the arms in basically three directions.

The frontal section is called the anterior head of the deltoid and it is brought into use in moving the arms from a crucifix position toe the point of hands touching in front of the body. A second function is to move the arms overhead from the sides when the palms are facing forward. From these examples you can see that bench pressing and overhead pressing strongly influence this anterior head of the deltoid.

The central section of the deltoid is called the lateral or medial (side) head of the muscle. This is the head that adds the most width to the upper body, and it is activated when raising the arms from the sides overhead with the palms facing down. The best exercise for developing this head of the delts is any one of the various forms of side lateral raises.

From the foregoing discussion please do not get the idea that the only way to exercise a particular section of the deltoid is to do one of the suggested exercises. The deltoids are such complicated muscles that every upper body exercise that you do will stimulate them to some degree. I am merely stating the most direct exercise for each section. For complete development you should take one of the following routines and work very hard on the listed exercises. You should do the suggested number of sets and should always try to exceed the number or repetitions that you think you can do.

As far as repetitions are concerned, most the the big guys use fairly low reps in building their deltoids. While they may use from 8 to 20 reps for other parts of the body, most stick from 4 to 8 reps for the delts. 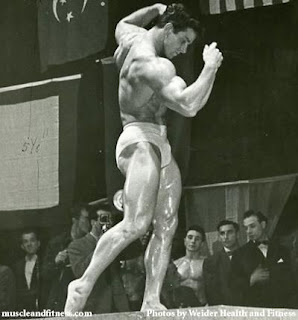 Reg Park has been noted for his fantastic deltoids for over 20 years now and he generally does sets of 4 to 6 reps in all his pressing and lateral raise movements. So, give low reps a try, and if they do not work for you then start experimenting with higher repetitions.

Regardless of what rep scheme you intend to use, be very sure to thoroughly warm up the deltoid region before using heavier weights. Two or three sets of pressing alternated with upright rowing with light weights should do the trick. Then, as soon as you have worked up to a light sweat, you are ready to tackle one of the following routines.

The first routine is a quickie. It consists of  only nine sets, and for best results you will need to finish the entire schedule in 12 minutes or less. Do the following three exercises in series fashion, one right after the other, three complete series:

Done in this order the exercises will thoroughly work all three heads of the deltoid in record time. You will find the presses to be much harder than usual because the deltoid will already be somewhat fatigued by the laterals.

Thanks to Robert Kennedy in 1968 are in order -
http://ditillo2.blogspot.ca/2012/04/original-pre-exhaust-article-robert.html

You will soon find (probably the next day when you find how sore the muscles are) that this routine will really get at the deep muscle fibers. Do all nine sets fast as you can, and be sure you rest only after each series and not between exercises. If you are not leaving sweat on the gym floor after this routine you aren't working hard enough.

The second routine is for the more advanced man who has a lot of time in which to train. The routine consists of 20 sets that will take about an hour to perform, but which will pump up the deltoids like never before. Perform low reps in the pressing and rowing movements, and slightly higher repetitions in the lateral raises.

The first exercise is the Press Behind Neck. Both Bill Pearl and Reg Park have done some mighty heavy weights in this exercise, so you can see that if you want big delts you will need to add weight as often as possible. Most of the bigger fellows do 5 sets of 5 with at least 200 pounds. You should do 5 sets with as much weight a you can handle, even if it is only 100 pounds to start with. Take your time between sets and work hard to up that poundage.

The second exercise is the Upright Rowing movement. This is an old favorite for both deltoid and trapezius development. Use a relatively narrow grip and be sure to resist the weight on the way down, as you will be getting as much benefit from the downward movement as from the upward part of the exercise. You should also use maximum weight in this movement for 5 sets of 5 reps. Many of the more developed men use 175 pounds in this movement, using very strict form.

The last two exercises should be done in alternate set fashion. These are the Front Raise with a barbell and the Bentover Lateral Raise with dumbbells. Do these exercises strictly and for 5 sets of 8 to 12 reps each. Alternate between the two, taking rest breaks between each set, not in superset style.

That is the whole routine. As mentioned, it should take about an hour to complete the 20 sets, which gives you an idea of how long to rest between sets. If you're finishing much quicker than that you're not using heavy enough weights.

I would suggest that you do this routine no more than twice a week. I usually work my delts with my arms when I am on a split routine. Personally, however, I prefer to do the whole body three times each week, so I usually do the quickie routine twice a week and the second routine once, on a day when I have available time. Regardless of what routine you do choose or how you decide to possibly combine the two each week, work as hard as you can for at least six weeks before going back to your usual shoulder training. After a while come back to these routines and over the period of several months see what kind of gains you can accumulate.