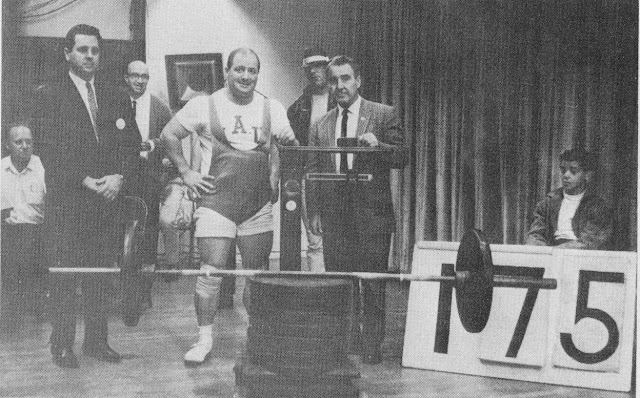 Author's Note: There is a young man attending the Massachusetts Institute of Technology graduate school on a fellowship from the bell Telephone Company. He is studying engineering. In his spare time he lifts weights and he lifts them so well that he now has officially surpassed two of the four national records in the powerlifts. In a recent contest in Boston, weight 279 pounds, Gene Roberson made lifts of 490(actual weight 486.5) - 740(actual weight 730.5) - 715 for a total of 1945. The squat and the total exceed the listed national records.

Gene first broke into the national limelight at this year's Senior National Power Lift Championships here in York. I was his chief opponent on that occasion and although I outweighed him by over 60 pounds, my total exceeded his by the meager margin of five pounds. I have spent as much time as possible with Gene and I have come to greatly respect both his lifting ability and his approach to the sport. I asked him to jot down some of his background in lifting and some of his preparatory training for the National meet this past year. He did this and I present it now to the readers of Muscular Development.

Issue This Article Was Taken From


"I was almost sixteen years old before I saw my first plate-loading barbell. I had seen pictures of strong men and wrestlers and had always been interested in strength. At the age of twelve I was the 'first kid on the block' to lift a 100 pound sack of cement to my chest. I was interested in all forms of athletics, having played baseball, softball and sandlot football. By the time I was nearly sixteen I had a good background for weightlifting, both physically and mentally.

"It was at this time that a close friend, Randall Pitts, invited me to his basement gym to try my hand at lifting weights. Like most people who have never lifted, I was convinced that I could press one hundred fifty pounds. My first attempt, however, with one hundred pounds, proved that I was wrong because this was a limit effort. Randall then taught me the clean and jerk and I attempted 125 pounds, failing with the jerk. This was the spark that I needed to put me on my way to a rigorous training program. I trained with Randall for about four months but since we were both inexperienced, the training consisted of only presses, curls, and triceps development exercises.

"In my early years, I was primarily interested in bodybuilding and in the four months that I trained with Randall my arm size increased from 12.5 inches to 14.5. It was about this time that I purchased a 160-lb. York Barbell set from a local sporting goods store. Several of my friends and I then trained at my house and at the end of nine months of training I was able to press 190 lbs. at a bodyweight of 170. I continued to train at home for the next year, still working on my upper body exclusively, until, at the end of 18 months training I could make the following lifts: Press, 235; Bench Press, 330; Squat 225; Deadlift, 300; Curl, 150. My measurements were approximately as follows: Arms, 17"; Chest, 45; Thigh, 23; at a bodyweight of 180 lbs.

"Soon my interests shifted, and I discontinued all weight training for about two months. When I resumed training I had lost 10 lbs. and my lifts had decreased approximately 20%. This was the summer of 1960, and at this time I read my first Strength and Health magazine [this blogger software really loves to refuse the ampersand].

In this magazine I found just what I needed. In the section devoted to publicizing forthcoming weightlifting events, I discovered a contest in Birmingham. I decided to enter having two weeks to train and was extremely confident of first place. In the contest I made the following lifts: Press, 195; Snatch, 185 (4th attempt); Clean and Jerk, 230. My bodyweight was 173. My confidence was not justified, however, because I placed last in a class of four contestants and was beaten 180 lbs. by the winner.

"After the contest I began my senior year in high school, at which time I worked hard on the Olympic lifts. In december I totaled 635 lbs. In March I totaled 630 lbs. Then I joined the Birmingham YMCA and came to realize that a weightlifter must do squats. At this time I began my first power routine so that by the middle of August I made the following lifts in the Southern Teenage Championships: Press, 245; Snatch, 200; Clean and Jerk, 280; at a bodyweight of 199.

"For the next three months I trained almost entirely on the squat and squat snatch and made the following lifts in the Dixie Open in December of 1961: Press, 240, Snatch, 230; Clean and Jerk, 285; at a bodyweight of 197.

During the winter and spring I returned to power training which consisted primarily of the bench press, squat, and deadlift. By the middle of June, I had officially bench pressed 385, squatted with 500, and deadlifted 585.

"I entered the Southern Teenage Championships in August of that year making all nine lifts and weighing 208. I pressed 280, snatched 240, and cleaned and jerked 305.

"My training for the next six months was rather uninspired, but I finally came to life in the spring of 1963 after having some rather poor contests. On July 20th of 1963, I totaled 900 lbs. for the first time with lifts as follows: Press, 300; Snatch, 260; Clean and Jerk, 340; at a weight of 213. Four weeks later I entered a contest in Louisiana which proved to be my first big event. My competition was John Gourgott. I weighed 217 to his 202 lbs. I pressed 315 to his 325. In the snatch he took a big lead by making 285 to my 265. In the clean and jerk he made only one success with 330, and I made a last attempt success with 360 to win by 5 lbs. This contest marked the best Olympic lifting that I have ever done on the basis of bodyweight.

'Me next contest was in Louisville, Kentucky, against John McIntyre, in February of 1964. I won this contest 920 to his 915.

"After training hard to two months I won the Southern Area YMCA Championships with lifts of: Press, 340; Snatch, 270; Clean and Jerk, 365. This was at a bodyweight of 251.

"Since this time my interest in Olympic lifting has faded by recent totals of 955, 960 and 975. My best official lifts are as follows: Press, 340; Snatch, 290; Clean and Jerk, 365. I still have the desire to total over 1,000 and feel that it is within my capabilities; however, my main desire is to be a good powerlifter. I have lifted in only one big power contest to date. This was February 27th when I competed with Terry Todd in Chattanooga. Although I was soundly defeated, I broke all my personal records and vowed to do better next time. As it turned out, next time was Senior Powerlift Nationals.

"In preparation for the Nationals, I had bench pressed 470, squatted with 680, and deadlifted 705 for a total of 1855. I am writing this article only hours before the heavyweight competition is to begin for the contest. The remainder of the article will be devoted to the results of the contest and my analysis of my performance.

"The contest is now over, and the results are past history. Once again I went down to defeat with a narrow margin of 5 lbs. My total of 1855 was 105 higher than my previous best official total. Since my bodyweight has increased by only four pounds I am well pleased with this improvement. At this point I will discuss each lift completely in the order of their performance and from the standpoint of my preparatory training. 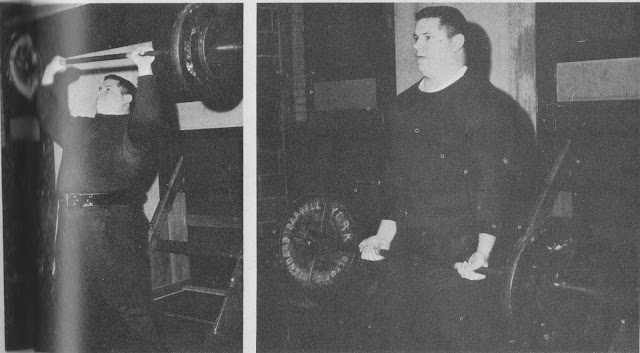 "I began serious preparation on all three lifts on June 1st of this year. My initial bench press routine consisted of 8 sets, 6 reps, working up to 335, plus 4 sets of triceps curls. These exercises were performed on Monday, Wednesday and Friday, with the emphasis on improvement over each workout. I continued with this routine until Monday July 5th, at which time my top bench was 395 x 6, and I was performing 10 sets of bench presses. It was at this time that I injured my right pectoral muscle. My bench press was seriously affected, and it was not until my last week of training that I was able to make 400 for 6 reps. The last two weeks of training were devoted predominantly to single reps with heavy weights. In the contest I started with 460 which was 5 lbs. more than I had ever done in a contest and 10 less than I had ever done in training. The next attempt was 480 which, I am told, is a new official world national record. This attempt was smooth and relatively easy, however, I was unable to lock out 500. I attribute my inability to complete this lift to the elbow injury I sustained, which kept me from doing supplementary triceps work after July 5th. 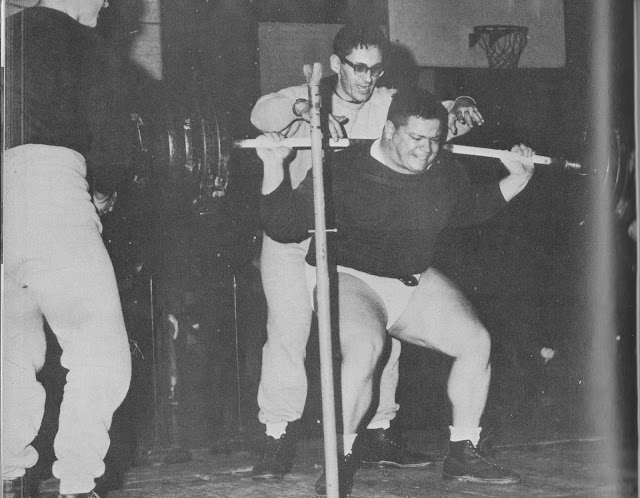 Gene Roberson, 740 Squat
"My training for the squat was identical in form to my bench training. I seldom do partial squats because I do not have enough weights. On June 29th, I reached somewhat of a peak in the squat by doing 6 reps with 500 lbs. At this time I changed to the half squat from the power rack, still doing 6 reps. I continued these until July 28th at which time I returned to regular squatting, 6 x 6, followed by 2 singles. I continued this schedule until about two weeks go when I began to concentrate on singles. In the contest, I made 650 with ease, 680 with much difficulty, and 705, which actually weighed 703, and this felt like a limit. I believe in squatting with the legs and not the back; therefore, I place the bar high on my back and maintain a fairly erect position. My physique is such that this type of squat is not only comfortable but very efficient. I attribute much of my size and strength to the correct performance of the squat. 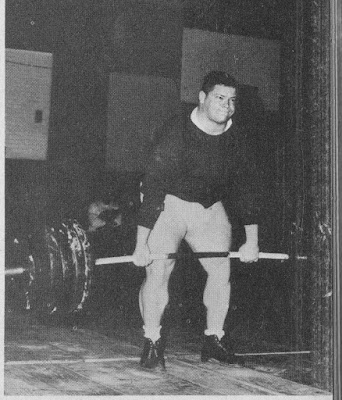 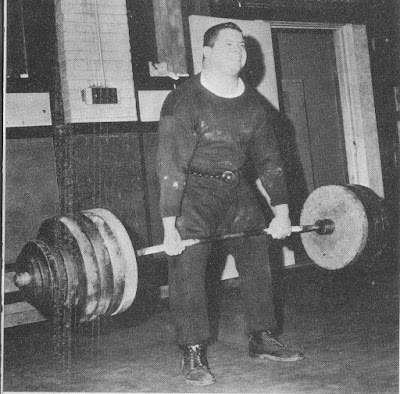 "My deadlift training did not begin until June 17th. The reason for this was that my bodyweight had dropped from 264 to 250 since February and I was in poor shape. Therefore I felt as though all three lifts would be too much of a strain. My routine in the deadlift was the same as the bench and squat, with an occasional workout on the power rack in the lockout position. Since I trained on only one lift each day, I made good progress on the deadlift, going from 600 to 705 in a training period of only two and a half months. In the contest I started the deadlift with 675 which was my personal record officially. My second attempt was 700 which was smooth but hard. My final attempt with 720 failed at knee height. I had expected to make 725 in this lift, but the exertion of the 705 squat, combined with having to do all three lifts the same day proved to be too much.

"My plans at this time are very indefinite. I cannot continue to lift in the heavyweight class weighing 268. I must either weigh 280 or train down in anticipation of a 242 class. I prefer the latter. Next year at the Senior National Powerlift Championship you will know what I decided." 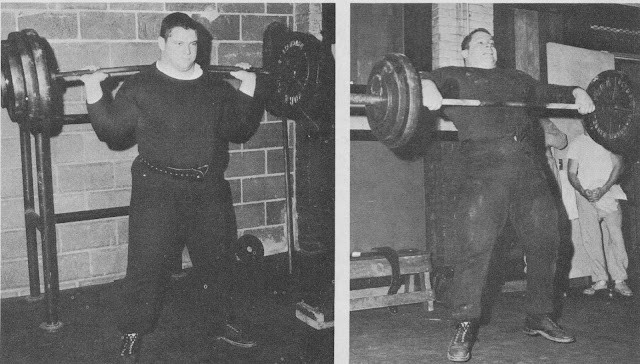 Fortunately for the advance of powerlifting and unfortunately for my two records, Gene didn't wait until the '66 Seniors to let us know what he decided. He is now weighing slightly over 280 and if he continues to train and increase his bodyweight his records should continue to skyrocket. His approach to lifting is positive and his dedication to regular training is amazing. Both of these things are admirable traits - traits that aspiring powerlifters around the country and around the world would do well to copy.