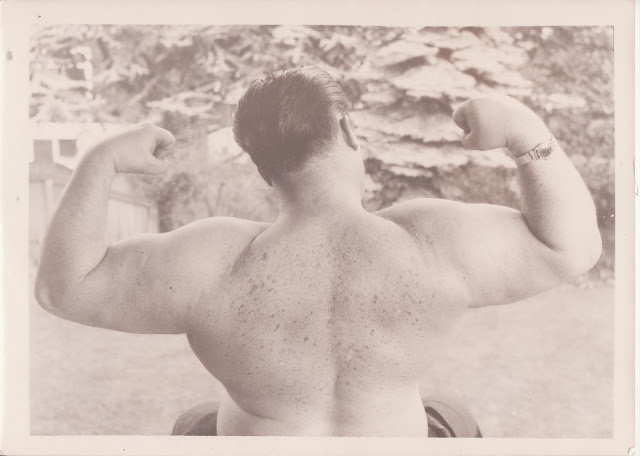 
[Note: This article is, in my opinion, one of Doug Hepburn's most mature and literate. It was written when he was 38 years of age; 11 years had passed since his gold medal win at the World Weightlifting Championships in Stockholm with a 1030 (3 lift) total. Great changes on many levels had taken place in Doug's life in that time, and certain sections of this article do much to explain what many fail to understand when reading popular bios of his life, a life that was fully lived, explored and enjoyed to the utmost. May he be remembered well and long.]

This may sound strange to the reader but in fact many weightlifters, who outwardly give the impression of a sincere desire to succeed, are in truth (though they are not conscious of it) conditioning themselves for failure.

In numerous cases one could regard the showy, sometimes lengthy ritual of manufacturing the stimulation necessary to elevate a personal limit poundage as merely a facade to disguise the feeling of non-confidence, and the offshoot of this fear, fear of failure -- failure not in regard to self, but in the eyes of others.

Here then is a second truth (if one can accept it) -- that the fear of failure is born of infidelity to self, conceived through the unconscious realization that Self is, in fact, motivated by the ego of others.

The above fact constitutes the essence of an inner conflict, the result of which stifles the Will to Will and the vital driving force which is so essential to the champion athlete.

Any successful artist knows, be it painting, music, poetry, and the rest, that the striving for true self expression can be attained only through the medium of Self, divorced from the motivation of creating to please others. If others are to find pleasure in one's creative efforts, they will do so in the same manner as the person who provided the creation. In this way both the artist and those who appreciate his efforts achieve a greater satisfaction, and what may be more important, a greater mutual level of accomplishment.

Each dedicated athlete is an artist in his own right. He creates not with pen and paper, brush and palette, but with body and mind. His level of accomplishment is just as great as that in other fields of expression. To regard himself as less is to put himself below his fellow man. With such an attitude one could readily consider himself inferior -- inferior to what? Again we return to the conflict created by the motivating of endeavors to self expression judged by the yardstick of others. For if the feeling in inferiority exists, then must not one strive to appease self-appointed superiors?

The disillusioned athlete is forced to bear the unhappiness and frustration of the world. He becomes the "Kick Me" of the Al Capp comic strip except in this case it is pathetic. Because of an unguarded dedication he has become the prey of others, disillusioned and in conflict like himself. Others who possess not one iota of comprehension as to the inspiration and splendid ideals he is struggling to uphold.

Unwittingly, regardless of an inner sincerity, because of a loss of faith in Self, a dislike, even hatred for Self begins to take hold within him. Again, unconsciously, this athlete may well seek an avenue of self punishment. What better way to punish himself than to lose or destroy the Will to Win in the sport of his choice?

Many athletes, prior to and during competition, experience an adverse excitation other than the normal psychological stimulation created by the athlete so that he may realize a maximum physical efficiency in the athletic endeavor. This undesirable and negative excitation detracts proportionately from the normal and desirable pre-competitive and competitive preparation of the body for the "all out" or maximum effort expenditure.

A negative excitation, such as the above described, is derived primarily from the feeling of inadequacy, or in simpler terminology, fear of failure.

It would be wonderful if each and every budding champion could enter competition absolutely certain of winning. Such a condition could not possibly exist except perhaps in the mind of a "Day Dreamer." In this, then, each athlete must accept the possibility of failure, and in this submission, if it is a sincere submission, if only to Self, the fear of failure in the eyes of others has been surmounted. In other words, in order that one may remove a fear, one is obliged to give in to that particular fear.

The normal reaction of the ego of "self" to such a submission is one of rebellion and it is here where the insidiousness of the ego may bar acceptance with the resultant "freeing" of  a deeper and far more powerful motivating drive of "Self." It is here where the acceptance of real truth is contrived and not through the intellect via "rationalization" but through the capacity to "feel" much in the manner in which we "feel" Love and Hate. The wisest man in the world knows that when one strives to explain the above two feelings that all the knowledge thus acquired by mankind is inadequate.

Self confidence, or faith in the ability of self, can to a limited extent be accentuated though the influence of qualified individuals who are cognizant of the athlete's temperament and the intricacies of the athletic endeavor, especially those individuals whom the athlete responds and understands.

In the final analysis however, during the pressure of actual competition, the athlete must stand alone, especially so as a weightlifter. There can be no conflict within Self when the "Moment of Truth" arrives. That moment when all weightlifters invariably experience the realization that the goal aspired to is dependent upon the successful completion of one lift. In that moment Self may very well control the all important balance between success or failure. One could say that Self, during this brief span of time, is in command of destiny and perhaps is capable of deciding the outcome of the athlete's endeavor that will occur a few seconds in the future and that the Will to Win constitutes the deciding factor. The Will to Win, that intangible something born of a perfectness of harmony between Mind and Body.