Put "Life" in Your Deadlift - Richard Luckman (from Powerlifting News)

Note: I have included a Bench Press routine here by Dan Gerard, a lifter housed in the same prison as Mr. Luckman at the time this article was written. It follows the deadlift article.

Powerlifting News was pretty much the first powerlifting publication. It was around 10 years before PLUSA started coming out. There's some great stuff in those little papers! 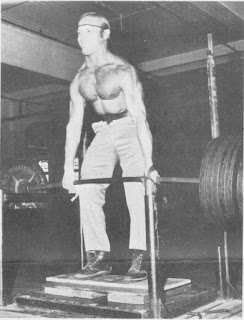 Pull From Just Above the Knee
Note Adjustable Stand 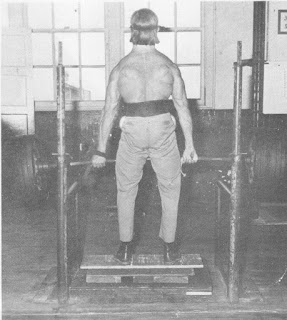 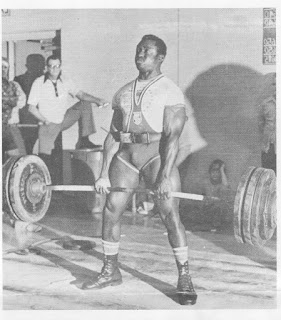 
Richard "Lucky" Luckman, 1972 Junior and Senior National Champion, has held the LW DL World Record several times. This year while an inmate at Wisconsin State Prison he pulled a big 619.

I have been reading Powerlifting News for quite a while now, so I thought I would like to give a little contribution in the way of an article about my deadlift routine and the weightlifting facilities here at the Wisconsin State Prison.

I would like to point out that, contrary to what a lot of people think, training while one is in prison is certainly not as easy as most uninformed people seem to think. There are a lot of 'psychological' aspects to contend with, not to mention the difficulty involved in obtaining the equipment needed to train properly. Aside from the weights and Olympic bars, which the State was benevolent enough to buy for us.

ALL other equipment such as benches, racks, etc., had to be bootlegged. In other words, the materials had to be obtained contrary to prison regulations. They were then assembled on the sly, that is, illegally, under the radar. Needless to say, all this required plenty of time, care and patience, and it also involved a lot of dedicated lifters. Or, you could say 'enterprising' lifters.

But the end result has been very satisfying. We have turned out some very competitive lifters over the last five years or so. To me, this has been a BIG boost.

The diet here leaves a lot to be desired. In prison you have to eat what is thrown at you day after day. And believe me, it sure isn't anything to write home about!

There is also a ton of petty bullshit that has to be put up with day after day. So, if people think training conditions in prison are so great, I think they are misinformed, and not really too smart at all.

I hope this information will be of help to some lifters.


We have a lifter here by the name of Ron Gerard. He laid off lifting for four years. In that period he was involved in a head on collision with a car. He was on a motorcycle. When Ron started training seriously again about two months ago, he could barely BP 265. But in this two month period of time he has brought his bench up to 405. Nice gain? In case anyone would like to know the type of routine he employed in gaining back so fast, here it is.

Dips:
5 sets of 8 with weight added to a belt, adding 25 lbs. each set
alternating each set with supersetted Lat Pulldowns and Standing Laterals.

He does the benches after the arm workout because he figures that a few presses after a hard arm workout builds that deep, sure strength.

He is sure that if it wasn't for all the lifting he had done over the years, he wouldn't have come out of the accident alive.