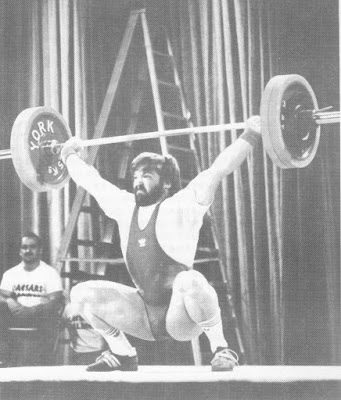 Eastern European researchers have found it more advisable to teach the Snatch first for two reasons. First, it is slightly more complicated than the Clean and Jerk. Second, it is a more explosive movement and it's crucial to teach beginners the proper rhythm of the lift from the start. They feel that if the athlete starts with the Clean, his body won't learn how to react with the speed needed in the Snatch. The method we'll use to teach is a top-down approach. Once the lifter has established a good starting foot position, the rest of his early work will be done from the hang.

One: The Starting Position 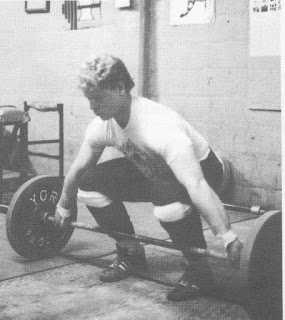 The starting position is learned first so the athlete knows where to place his feet and how to keep the lower back rigid. For full technical details, review here:

To determine the width of grip, use one of the methods shown in Section II (link above).

1. Stand over the bar, place the feet under the bar so that the bar crosses the balls of the feet (MPJ).

2. The feet should be a little less than shoulder width apart. A good way to find the strongest position quickly is to close the eyes and put the feet in the position that would be used in vertical or standing long jumping.

1. The position of the back is critical in making sure that the lifter is in the proper position. The best position for the back is when it is flat or slightly arched in the small of the back. Many young lifters don't know how to arch their backs and must be taught. The simplest way is to stand up straight and to raise the chest up and out. This will place the back in the proper position. The lifter must then work to hold this position throughout the lift.

2. Bend at the knees and waist while maintaining a tight back position. Grasp the bar with the Snatch grip. Find a comfortable position. The head should be in a relaxed position, the back flat or slightly arched. The bodyweight should be nearer to the front of the foot. The shoulders should be over or ahead of the bar. DO NOT sit on the heels or round the back.

D) Practice:
Assume this position at least 10 times. When a good position is obtained, mark the foot position on the floor with chalk.

This position is learned by doing the wide grip Press Behind the Neck. If you haven't been doing this exercise, refer to its description in the basic weight training exercises.

It's also recommended that you introduce a small leg kick into the exercise, making it a push press. This will teach the lifter to finish with a snappy arm lock.

Practice:
Do this exercise in training until the position is mastered. 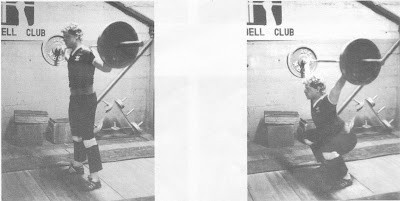 This exercise is included here to determine how wide the feet should be popped to the sides in the Snatch. It can be done with weight or with an empty bar.

A) The Starting Position -

1. Stand with the bar held overhead with the Snatch grip.

2. Place the feet in a position normally used for the Squat.

1. Squat down, by trying to put the hips between the heels.

2. Keep the head up and keep pushing on the bar.

3. Try to keep the feet flat on the floor.

4. Avoid very wide foot spacing. Try to get lower by putting the hips between the heels not by leaning over at the waist.

Assume this position 5 to 10 times. When a good position is obtained, mark this foot position on the floor with chalk.

This exercise teaches the athlete to move his feet properly from the starting position to the squatting position. Each athlete should know where his feet should be placed from the marks drawn in earlier practice exercises.

1. Place the feet on the marks for the Starting Position.

2. Squat about half way down. Lean slightly forward at the waist with hands on hips. The weight is on the toes.

1. Jump straight up from the starting position.

2. Try to land with the legs bent, and feet placed on the marks for the ending position.

3. Try not to lean forward on landing, instead, think "Hips between Heels."

4. Move the feet back to the starting position and repeat.

Five: Arm Action at the Top of the Pull 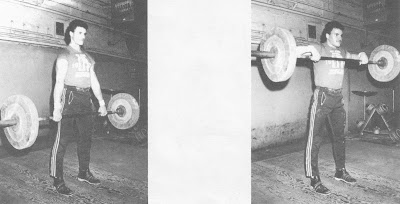 This action s very close to the Snatch Grip Upright Row. If this exercise has not been mastered follow the instructions below.

1. With a Snatch grip, hold the bar in front of you.

1. Lift the elbows, raising the weight along the body. This closeness to the body is very important in any type of lifting.

2. Pull all the way to the chin and return to the starting position. Try to keep the elbows pointing upward.

Six: The Hang Above the Knees Position 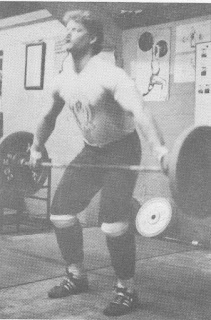 This is the basic or Power position for the Snatch. It must be mastered before moving on to the next exercise.

1. Place the feet on the Starting Position marks. Stand up. With a Snatch grip, hold the bar in front.

2. Raise the head, tighten the back.

4. Push the shoulders ahead of the bar. The bar should rest on the upper third of the thigh. The bodyweight should be at the front edge of the base of support. The lifter should still be able to wiggle his toes.

Assume the position at least 10 times.

Seven: Jumps from the Hang Above the Knees Position 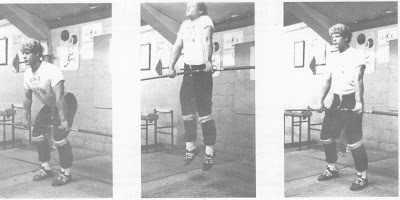 This exercise teaches the explosive movement of the hips and back in the Snatch.

1. The Hang Above the Knees Position.

1. Jump up, by driving the hips explosively upward and forward.

2. The bar should stay close to the body during the jump. If it is flying out away from the body, then the shoulders are being thrown back. The arms should be kept straight and relaxed, the shoulders flexed forward.

3. For work on footwork, try to land with the feet in the ending position.


Eight: Power Snatch from the Hang Above the Knees

This exercise ties together all the actions learned thus far. Review Parts IV and V to get the idea where this fits into the whole lift. Start SLOWLY to put together all the ideas you've learned. It's really important that the athlete develops a fluid motion. Make corrections to the gross errors only at first. Emphasize the smooth, flowing motion of the power snatch.

1. The Hang Above the Knee Position.

1. JUMP -- Drive the hips forward and up as practiced in the last exercise. Go up on the toes, but don't leave the ground.

2. LIFT THE ELBOWS -- Do the Upright Rowing motion. Keep the bar close to the body.

3. MOVE UNDER THE BAR -- As the bar reaches its highest point, rotate the elbows under the bar and bend the knees. As the movement gets faster this move is combined with the shifting of the feet to the ending foot position.

4. PRESS -- Finish the lift by pressing on the bar just like in the Press Behind the Neck.

Nine: Power Snatch from the Hang Below the Knees 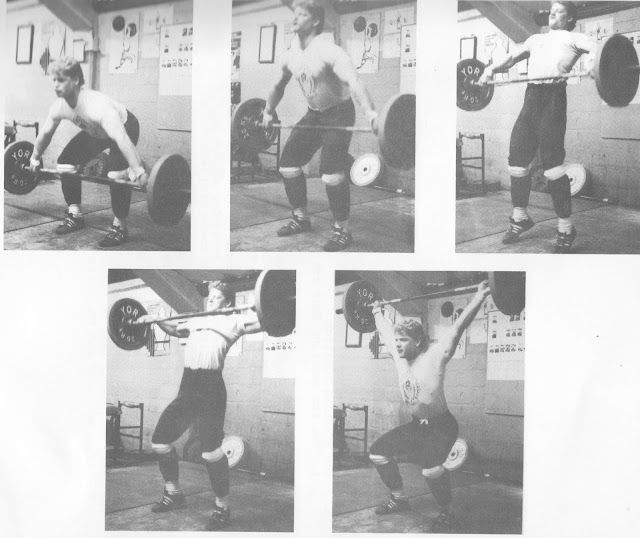 In this exercise the bar is moved even closer to the floor at the start. Review Parts III through VI. The aim of this exercise is to teach how to move the bar from below the knees, through the power position, and finish the lift.

1. Assume the starting position, learned in the second exercise.

2. Stand erect with the bar.

3. Bend the knees and bend forward at the hips so the bar hangs below the knees.

1. Start the bar moving by pushing down with the feet.

2. Shift the shoulders upward and back, while still keeping them forward of the bar.

3. Continue to raise the shoulders while moving the hips forward into the scoop position. During the whole movement keep your weight forward toward the toes.

4. Once in the power position, finish the lift as before.

KEY WORDS: 1.BEND AT THE KNEES AND HIPS TO GET INTO THE STARTING POSITION. 2. START THE BAR WITH A PUSH OF THE FEET. 3. KEEP THE SHOULDERS OVER THE BAR AS LONG AS POSSIBLE. 4. SPEED. 5. JUMP. 6. KEEP THE BAR MOVING UPWARD. 7. POP AT THE TOP. 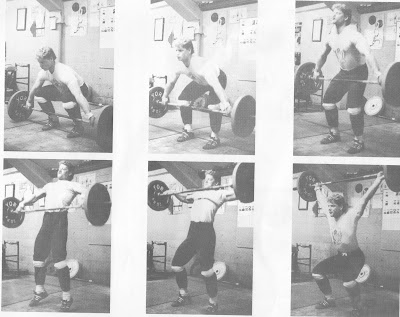 1. Use the position that was learned in the first exercise.

1. After getting into a comfortable starting position, push down on the floor with the feet to start the bar moving.

2. Lock the back so that its angle does not change while the bar travels to knee height.

3. The shoulders and hips should go up at the same speed.

4. Keep the arms relaxed and straight, elbows out.

5. Complete the lift from the knees as done before.

KEY WORDS: 1. BACK TIGHT. 2. PUSH FEET THROUGH THE FLOOR. 3. SHOULDERS OVER THE BAR. 4. HIPS AND SHOULDERS UP AT SAME SPEED. 5. CURL THE WRISTS TOWARD THE BODY.

As a training exercise do 3 to 5 sets of 3 - 5 reps. As in the other exercises, work on blending all the ideas together. Concentrate on speed and the correction of the gross errors at first.

Once the lifter can do the Power Snatch correctly, it's time to work on the full Squat Snatch. If the lifter has been doing the Low Position work (ex. 2), he's already been introduced to the low position. If you have done your job as a coach, the lifter will know that all he has to do is to bend the legs a little more and go into the bottom position. One point to stress is that there is NO difference in the pull for the Squat Snatch from that of the Power Snatch. THE ONLY DIFFERENCE IS THE DEPTH OF THE SQUAT. 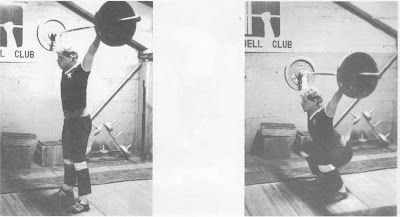 This exercise works footwork and gives the athlete the idea of pushing the body under the bar as he squats. Review Parts VI for details.

1. Place the bar across the back. Take up a Snatch grip as in the Press Behind the Neck.

2. Place the feet on the marks or the start of the pull.

1. Bend the legs slightly and drive the bar upward. Go up on the toes.

2. Jump the feet to the foot position for the finish of the lift (Overhead Squat position).

3. Push the body down into the low squat, using the arms.. Remember to put the hips between the heels.

12: Going Under the Bar Exercise 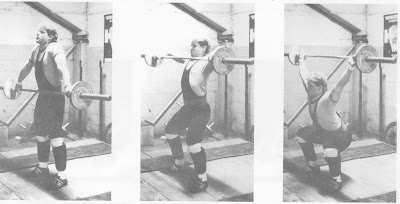 This exercise teaches the athlete the timing necessary to complete the pull and to catch the bar in the low squat. Very light weights are used in this exercise with an emphasis on speed. Review Parts V and VI.

1. Place the feet in the starting position for the pull.

2. Take the proper grip on the bar.

3. Stand erect with the bar.

1. Do two shoulder shrugs (slow). Concentrate on the contraction of the trapezius muscles.

2. On a third shrug (fast), quickly lift the elbows and go up on the toes.

3. Shift the feet to the low squat position.

4. Rotate the elbows and press the body into the low position. 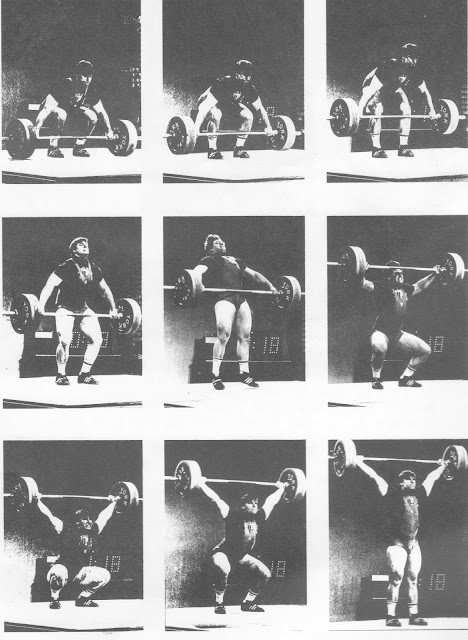 After the lifter has mastered all the previous exercises, he is ready to do the Full Snatch. Again, speed and flow of motion are the most important items. The coach should correct gross errors first. You can ignore some of the finer points while the athlete develops the speed and flow of the motion, and then go back and correct them in due time without any problems.


NEXT: TEACHING THE CLEAN AND JERK.