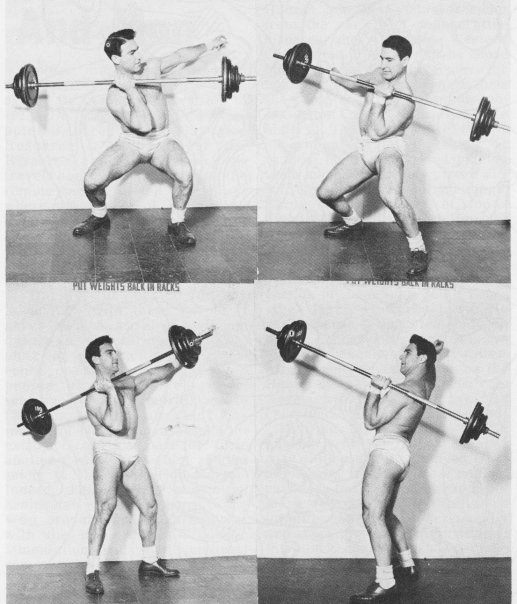 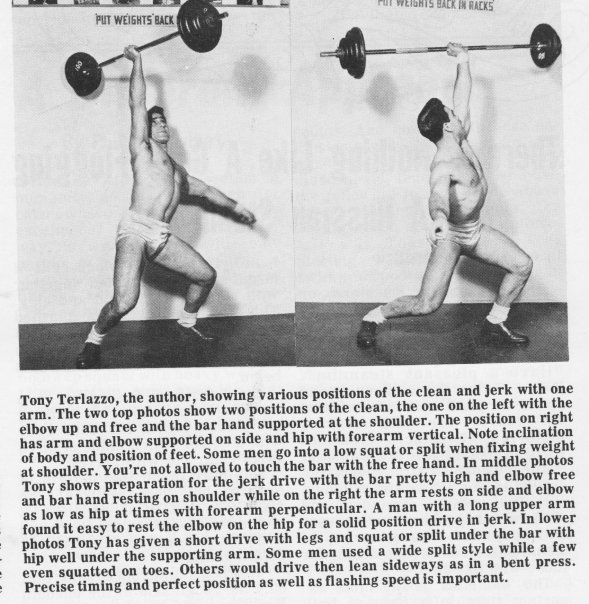 ALL ROUND LIFTING SIMPLIFIED:
The One Hand Clean and Jerk
by
W. A. Pullum (1950)


When the "One Hand Bent Press or Jerk from Shoulder" was a standard inclusion in the British set of championship lifts, it was then considered that the Jerk did not present anywhere near the same possibilities as the Press. Consequently, the only men who employed it were those who had failed to master the more intricate movement, believing, in most cases (quite wrongly, of course), that some peculiarity of physique was the responsible cause.

A matter of some 28 years attention to the "jerk" method of elevating single-handed a weight from the shoulder has brought the records on it up so high, however, that some people are now quite convinced that it is, after all, the superior "possibilities" method of performance. To reason thus is to ignore the one important fact that must be taken into consideration in order to make that reasoning logical -- and therefore correct! For 28 years, the "O.H.C. and Bent Press" has had no attention whatever devoted to it as a championship lift, the only standards for comparison in this connection being those which were established before specialization on the Jerk became the current vogue. Even so, there are two British official lifts (both world's records) which I can think of that do not suffer by this comparison, these being Edward Aston's 243.5 lb at 11 stone 7 lb (161 lb) - middleweight, and my own of 196 lb at 8 stone 10 lb. (122 lb). With such as basis for calculation, imagine what the  records would have been on this lift with the same amount and length of specialization. Definitely, they would have far exceeded the "Clean and Jerk," as its possibilities always have been that much greater.

High as are the present world's records on the "O.H.C. and Jerk," they would, in the main, mount appreciably higher still, I am sure, if it were decided once again to include it in the Olympic Set, as this would result in even more intensive specialization by all concerned. Just what they stand at now is shown by the following list, these being the figures up to end of November, 1947, with holders' names and dates of establishment:


Now follows the current International definition of and ruling on the lift -- this (together with the preceding list of records) having been supplied by Oscar State, Hon. Sec. B.A.W.L.A. 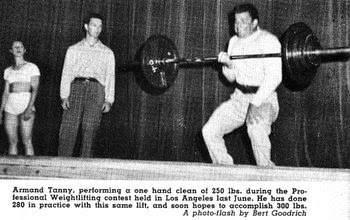 It shall be done in one distinct movement without any pause. The bar shall be placed horizontally in front of the lifter's legs. He shall grip it in the center with one hand with the palm forward and pull it up in a single, clean movement from the ground to the shoulder. During this first movement the bar must in no case touch either the shoulder or chest or the side opposite to the lifting arm, the axis of the sternum serving as the limit line. The lifter is permitted to support the hand or forearm on the knee or thigh opposite the lifting arm.

It shall be done in one distinct movement. The arm holding the weight shall be taken vertically above the head and held for two seconds in the final position of immobility, with the arm and legs extended, the feet on the same line with a maximum separation of 16 inches.

Movement finished with a press-out, a pause, supporting a hand of knee on the ground, touching the bar with the other hand during the movement, supporting the bar on the shoulder. It is also forbidden, when the jerk proper has failed after a visible effort, to make a second attempt after a fresh stop at the shoulder.


Coming now to instruction, the student is referred to Figure 1, which shows, fundamentally, the best bodily positional "address" to the bell preparatory to "pulling it in." Note that the lifting arm is straight, also the point to which the "seat" is lowered, this (with the "straight setting" of the back) insuring that the legs and body do most of the work in the "cleaning" effort. The maximum contra-leverage assistance which the other arm can offer is gained when the hand of that arm is placed (as shown) forcibly pressed down on the thigh beneath, to back the "cleaning pull."

It does not necessarily follow that the lifter must remain any length of time in the position shown before he makes the "pull," although if that is the method he favors in the One Hand Snatch (dealt with in our preceding article), he will probably employ it is this lift also.

Other articles on the One Hand Snatch:

But if he elects to start his O.H.S. by "pouncing" on the bell, he will just as naturally do the same thing with his "pull in" (most times, anyway). When this is the case -- as the bell doesn't travel the same distance in the O.H. Clean, and is also of a higher poundage standard -- his descending action does not need to be so swift, the lessened speed enabling him the more surely to take that firm grip of the bar demanded by the weight upon it.

There are three distinctive methods of jerking the barbell overhead, once it is at the shoulder, the style most in common use nowadays being the one depicted by Figs. 4 and 5. Ordinarily in this style, however, the elbow would rest on the hip in the preliminary setting of body and weight preparatory to impelling the bell away from the shoulder and "splitting" underneath it, as it is the legs which are the main governing factor from start to finish.

The bar is held actually as shown in Fig. 4 (clear of the body) when the continental style is employed, which Max Sick first introduced here about 1910, by which method he raised 230 lb or more at a bodyweight of 10 stone 7 lb (147 lb) -- then (and still) terrific lifting.

In this style, the lifter does not lock his arm by dropping vertically underneath the bell. Instead, he straightens the limb by a pronounced back-bend, allied with only a very slight bending of the legs. The Austrians used this style at the 1924 Olympic Games in Paris. It calls for great deltoid and spinal strength, and its practice still further, naturally, develops this strength.

The third method is the one depicted in Figs. 2 and 3. In this, the lifter positions himself so that the elbow is supported behind the hip; from which position he jerks to arm's length, "falling" away sideways with practically the speed of lightning, just as if he were getting under One Hand Snatch which is "fixed" in that way. Of the three, this is the most spectacular style when performed by a really competent man.

Position for the final passing of the lift may be with the heels together (Fig. 6), or feet astride to the limit of 16 inches set in the definition.