ACCENT ON POWER:
An Off-Season Schedule of Assistance Movements
to Improve Your Olympic Lifting
by
George Kirkley (1954)

Every Olympic lifter -- from novice to world champion -- can do with more power. Yes, even lifters who already possess great strength can always add a little to their total by getting even stronger. On the other hand, most lifters can benefit by improving their technique . . . I will not say every lifter, because many already have developed their technique to its full or near maximum, and further progress can be made mainly be getting stronger.

At the moment I am going to discuss power exercises, and with the close season ahead for most British lifters -- all divisionals and most of the leagues have now finished for the season -- here is a good opportunity to train on a power schedule for a few months. I know that many Olympic competitors either rest during the summer months (from lifting, that is), while others switch over to all-round work or perhaps bodybuilding. For those of you who feel that a period on some power building movements would be beneficial, why not try this schedule?

It is closely allied to the Olympic movements and provides an opportunity to try out some of the "assistance work" many lifters often promise themselves but perhaps never really get down to. These movements are particularly beneficial to those lifters who have good technique and speed, but are lacking in all-important basic power.

There are, of course, many other power building movements. But they cannot all be included in any one schedule. There are many dumbbell exercises that bring good results, but I want this routine to be fairly brief, allowing for the use of heavier weights as well as freeing up some time for the summer months. 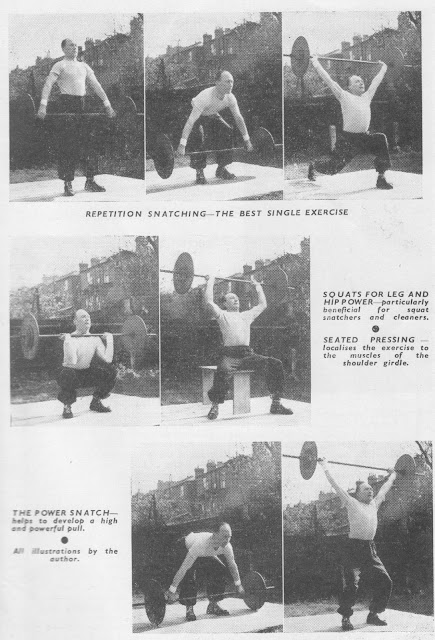 First, we take a movement which I believe should be included in everyone's schedule at all times -- the REPETITION SNATCH. This, in my view, is the greatest single movement in the whole range of weight training. Whether a man is a weightlifter, bodybuilder, athlete, or sportsman of any kind, I consider he is bound to benefit from the regular practice of repetition snatching. If a man could train on only one movement for the rest of his lift this is the one he should choose. It is NOT A COMPLETE MOVEMENT -- no single thing is, in any walk of life -- but I consider it has more virtues than any other exercise, building qualities of strength, stamina, co-ordination, pulling power, etc.

In this particular schedule it serves the additional purpose of enabling the lifter to continue training for speed of footwork. I am referring, of course, to the split style method. I consider that prolonged training on static movements will tend to slow down a lifter . . . and for an Olympic man that is fatal!

So, first it is the Repetition Snatch. Start in the standing position with the bar held across the thighs as shown in the accompanying photo. Lower nearly to the floor, keeping the back straight, then without pause pull up into a regular Snatch. I repeat, keep the back straight and squat down with the lowering of the bar. Don't lean forward. Aim for a high pull and plenty of SPEED. 6 sets of 3 reps. Once you have the movements down the poundage should be about 80% of your best full Snatch from the floor.

Follow this with SEATED PRESSING - a variation of the regular standing Press, and localizing most of the work to the muscles of the shoulder girdle. Use a poundage that you can just handle for 5 sets of 3 reps. Note that the staggered placement of the feet shown in the photo serves to add stability.

Then, the POWER SNATCH. Pull straight from the floor to arms' length without any movement of the feet, dipping at the knees to facilitate the arm lock. Start the pull at a moderate speed from the floor, then accelerate, aiming to pull as high as you can before you start to turn over the wrists. Work up to limit, then reduce and do 5 sets of 2 reps. 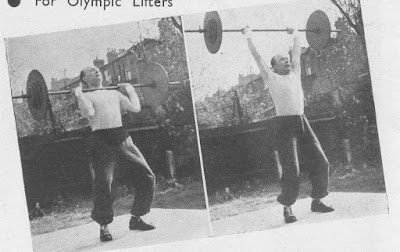 The POWER CLEAN AND JERK comes next. Clean the bar without any foot movement, again dipping at the knees as the bar comes into the shoulders. For the Jerk, give the usual knee dip then thrust the bar overhead FAST, dipping the knees again to help arm lock. This is not a split jerk. Vary your work on this movement by sometimes making one clean and three jerks, sometimes three cleans and one jerk. Do up to 5 or 6 sets. 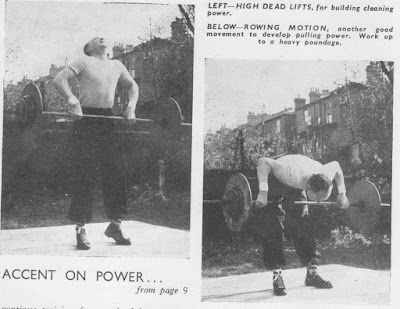 Now, the HIGH DEAD LIFT - a very valuable movement for improving the Clean. Pull the bar about waist high and stretch up on toes -- see photo. Work up as heavy as you can, consistent with a waist high pull, in sets of 3 or 4 reps, resting the bar on the floor for a few seconds between each rep.

The FRONT SQUAT gives the legs a real workout and is particularly beneficial for squat cleaners and snatchers. Hold the bar in clean position, elbows UP, and squat fairly low with a straight back. Say, 5 sets of 4 reps with a moderate to heavy poundage.

Don't include the last two movements on the same day's training, but alternate them in turn -- High Dead Lift one training day, Front Squat the next, and so on.

Finally, the SNATCH GRIP BENTOVER ROWING MOTION. Bend over with body parallel to the ground, and keeping stationary, pull the bell up as high as possible towards the throat. Work up to a heavy poundage -- 5 sets of 3 reps.

Try this power routine for two or three month periods. For many of you it will be a change from your usual work, and at the end of the time your Olympic total will, after a short period of re-familiarization with the full lifts, be due for a rise. Work with a progressive plan, adding a little weight to each movement every two weeks, while keeping the sets and reps the same.