169 pages, containing 60 Routines to aid you in your quest for size and strength.


Josh Bryant, MFS, CSCS, PES, trains some of the strongest, most muscular athletes in the world at Metroflex Gym in Arlington, Texas. Josh has won many national and world titles in powerlifting and strongman and was the youngest person in powerlifting history, at 22, to bench press 600 pounds raw. Josh has squatted 909 pounds in the USPF, officially bench pressed 620 pounds and deadlifted 810 pounds – both raw. He is not all brawn; he has a Master’s degree in exercise science, along with other prestigious certifications. He is the co-author of Amazon's No. 1-selling book Jailhouse Strong and EliteFTS' best-selling eBooks, Metroflex Gym Powerlifting Basics and Bench Press: The Science.
To learn more about Josh, visit http://www.joshstrength.com/

A short excerpt from the book:

The late Peary Rader,  notable iron game historian, repeatedly noted in the 1950s and 60s that Chuck Ahrens had the widest shoulders of any human being he had seen or seen photos of. A cursory Google search of Chuck Ahrens reveals that Ahrens was huge, with an enormous chest and broad, broad shoulders. He was also somewhat of a mystery man, commonly referred to as reclusive and a powerhouse, lionizing his place as one of the men who put Muscle Beach on the map. 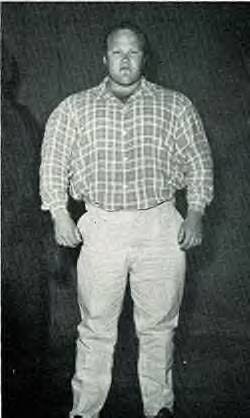 Besides extremely heavy lateral raises, incline presses and overhead barbell presses, there may have been another exercise that aided in Ahrens uncanny deltoid development.

This exercise is affectionately known as the "Ahrens Press."

The Ahrens Press is a variation of the two-dumbbell overhead press, but instead of pressing the dumbbells straight up, you press them away laterally, much like making a "V" with both arms overhead. Ahrens had no choice but to press the dumbbells in this style because he used special loadable dumbbells that were very long. In other words, it was impossible to press them straight overhead because they would hit each, owing to the massive poundages he routinely pressed. Necessity was the mother of invention, in this case!

What does this mean for the modern bodybuilder?

Because of the lateral pressing motion, this exercise forces the medial delts, or "caps" to work harder.

Grasp two dumbbells and lift them to shoulder level with a pronated grip. From shoulder position, press the dumbbells out laterally, away from you. Finish with arms locked and at a 15 to 30 degree angle. Return to starting position.

1) Standing Overhead Press, 3 sets of 3 reps with 3 rep maximum. As heavy as possible each set. Rest 3 minutes between sets.

2) Ahrens Press (cluster set) ??? sets of 5 reps. Start with 15 rep max of a traditional dumbbell press and d as many sets of Ahrens Presses as possible. Rest 30 seconds between sets.

4) Reverse Pec Deck, 3 sets of 8 with 12 rep maximum, hold the contracted position strongly for at least one full second. Rest 90 seconds between sets.

5) Handstand Pushups, 3 sets max reps. If you are unable to do these, do them in the downward dog yoga position.

The key to maximum muscular development is in the synergistic blending the most effective methods of the past with the newest innovations.


Many factors combine to determine the distance between the hands for the pressing grip, but the main factor is the width of the shoulders. The average grip is slightly wider than shoulder width. I is not recommended to gauge the grip in relation to the knurling on the bar, because this can vary considerably on different makes of bar. The knurlings on a "Viking" bar are 16 inches apart but on a "York" bar are only 15 inches apart. This fact was revealed in interesting circumstances during the 1948 Olympic Games. Bob Hoffman told Oscar State that little Joe de Pietro was having difficulty in cleaning the bar in training because the wider knurling made him take a wider grip than he normally used. Oscar measured the York bar that Bob had brought with him from the States, then later on, when checking up on the bars that were to be used the actual competition, Oscar asked the manufacturers, Messrs. Spencer, Heath and George, to alter the knurling on the bantamweight set. This was done and both Bob Hoffman and little Joe thanked Oscar very warmly for his sporting cooperation.

However, to return to our grips. You should ignore all advice which simply says, "Grip one inch inside the knurling." Instead, we recommend the practice adopted by Jim Halliday, in particular, when he is lifting on a bar to which he is not accustomed. Jim places his thumbs together in the center and spans outwards until he reaches the distance he requires.

The grip slightly wider than shoulder width is used by many leading pressers, notable John Davis. A few use the narrow grip, mainly because they also employ a low starting position. See the accompanying photo of John Terpak below: 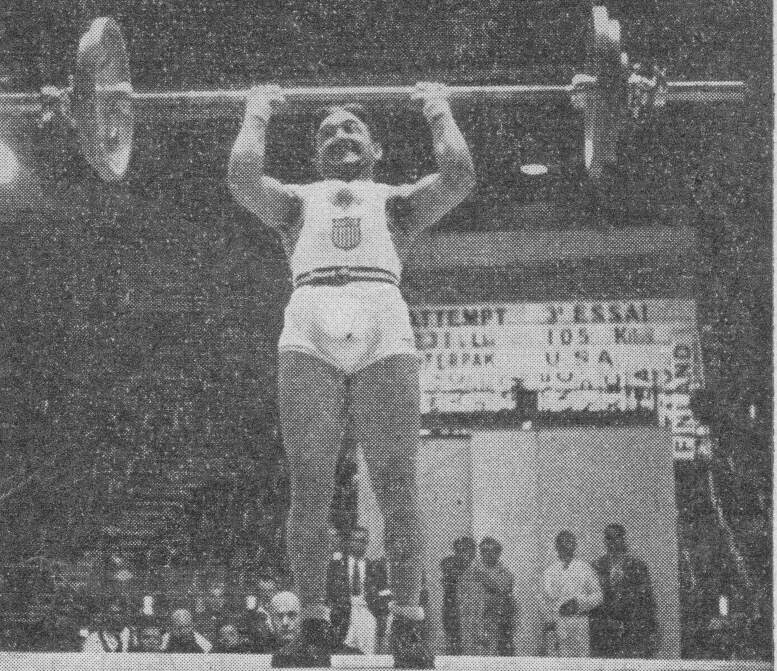 -- John Terpak pressing with the narrow grip Note that his thumbs are a short distance inside the points of the shoulders and that the elbows are kept close in. Click Pic to Enlarge.

It should be mentioned that this narrow grip and low starting position enables the lifter to get a long, fairly fast drive, which assists in carrying the bar past the sticking area. However, some lifters will find it is disadvantageous to use the narrow grip for the following reasons. As the upper arms pass the horizontal and the scapulae start to rotate outwards in order that the upper arms may continue to the vertical position, the elbows begin to straighten and to approach the head. The narrow grip inhibits this elbow action, and since there is also a changeover in muscle action in the arms and shoulders at the same time, the bar may "stick" near or slightly above the top of the head.

Let us examine this action from the point of view of leverages.

During the first part of the Press, the shoulder joint acts as the main fulcrum and with the hand directly above can work fairly efficiently. However, when the upper arms reach shoulder level, the elbow joint becomes the main fulcrum and with a narrow grip the elbow is well outside the line of power (or direction of the Press), resulting in a weak mechanical position. See Figure 1 in the illustration below. 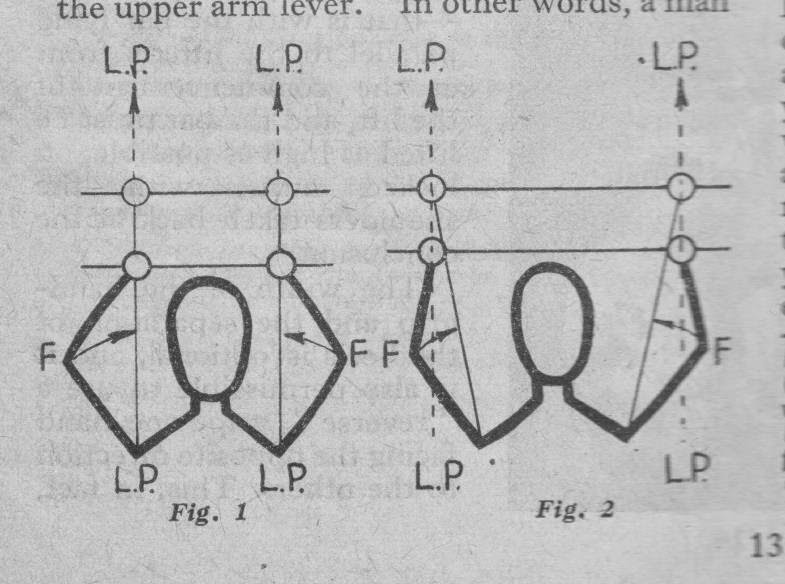 When a wider grip is used, the elbow fulcrum is nearer to the line of power (L.P.) and therefore works at a greater mechanical advantage. See Figure 2 above.

To overcome this mechanical disadvantage of the narrow grip, good lifters force their elbows inward and upwards in an effort to keep them immediately beneath the hands, thus bringing the elbow fulcrums close to the lines of power. Unfortunately, however, as the bar clears the top of the head, they are obliged to turn the elbows outwards slightly owing to the articulation of the shoulders, and it is at this juncture that the sticking point is likely to occur.

The normal lifter will find, therefore, that a grip slightly wider than his shoulders will enable him to perform to the best mechanical advantage. If he has tight shoulders or a kyphosis (exaggerated rounding of the upper back), which prevents him from extending his arms above his head with the hands shoulder width apart, he will find that that simple expedient of widening the grip will enable him to get his arms up to the desired finishing position.

There is a danger to be avoided when using a very wide grip. You may find that your elbows will wander outwards and even backwards. The best position of the elbows is forwards and inwards. See photo Mahmoud Namdjou below. 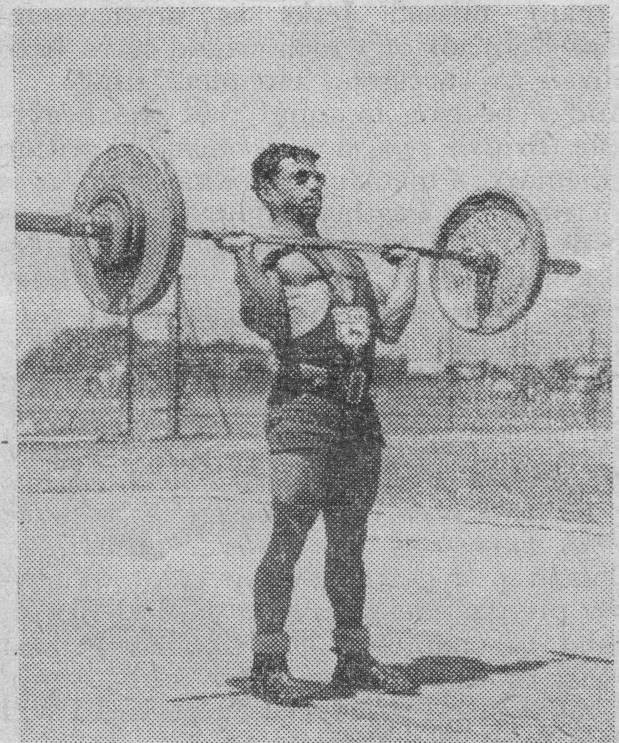 -- Mahmoud Namdjou clearly demonstrates the inward inclination of the elbows in conjunction with a wide grip. He is one of the strongest pressers in the world and has done 220 at nine stone (126 pounds) on several occasions, and at one time was in striking distance of the world record.

Grigori Novak uses a similar starting position and both these lifters can do this because of their unusual ability to rotate the humerus outwards while gripping the bar. This ability can be acquired by constant practice, even though it is not normally present in the average man, most of whose arm movements are inward rotations.

The inward inclination of the elbows will enable you to hold the bar slightly lower and also to impart to it a slightly longer drive. Moreover, the anterior deltoids and upper fibers of the pectoralis major can enter more effectively into the starting movement of the Press when the elbows are brought inwards.

On the subject of leverage, much has been said about the advantage to be derived from having the upper arms longer in proportion than the forearms. This would be true if all insertions of the deltoid were at the same distance from the fulcrum provided by the shoulder joint. But Al Murray has observed during his hospital experience that this insertion can vary considerably, thereby affecting the balance of power and weight of the upper arm lever. In other words, a man with a long upper arm and apparently good pressing leverage may in fact have bad pressing leverage owing to his deltoid being inserted high up on the humerus. Conversely, a deltoid insertion low down on the humerus will give good pressing leverage, even on a short arm.

Our advice, therefore, is to obtain the services of an instructor who has had some experience in assessing variations in physique and can tell you whether you are best suited with a wide grip or a narrow one. Even then, he will have to observe you closely over a long period and make many adjustments before he will be satisfied that your positions are ideal. These experiments will have to last many weeks, because slight alterations can only be fairly judged after a reasonable period.

It may take you a long time to find your ideal pressing position, but your perseverance will be rewarded in the end.