There is no better demonstration of upper body power than the bench press. The bench press is pure unadulterated power from its motionless beginning on the chest through its straight line of vertical travel to lockout. It is a lift that is done with a smaller ration of muscle to weight than the squat or deadlift. Squatters and deadlifters may feel a bit put out by the popularity of the bench press, but you really cannot blame the unenlightened public. 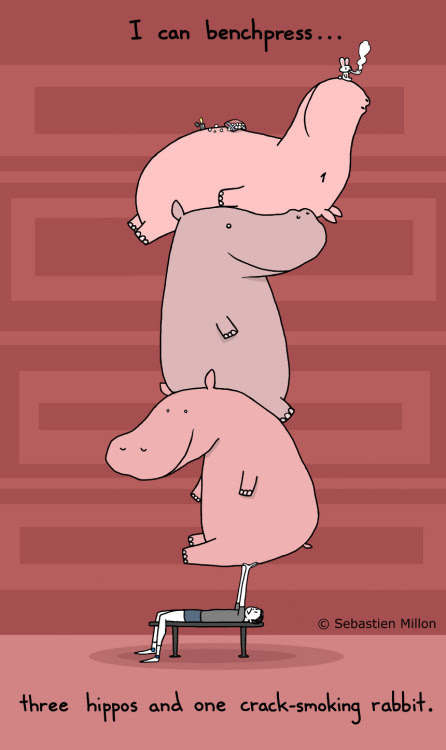 Powerful arms, shoulders and chest are the first images that come to mind when people think of a strong person. Their concept is further reinforced when they see champion bench pressers like Mike Hall, Pat Casey, Mel Hennessy, Larry Pacifico and Bill Kazmaier in person. The upper bodies of these gentlemen are enormous.

My bench press training was influenced by Jim Williams and Pat Casey. I use the word "influenced" because I am not the same person as Jim Williams or Pat Casey. Accepting their routines as the last word and never  thinking or innovating for myself would eventually have led to a halt in progress. These two men have obviously perfected routines that work best for them. You will do well by seeking all the advice you can from champions, them put it together with a knowledge of yourself to make up a routine that is for you.

There was no way I could do Jim's routine for the bench five days a week and make progress. My leverages were different and I had a mental block about the bench press. Because it was always difficult for me to make progress, I settled on a routine better suited to my body. It was done two times per week, heavy and light, supplemented by 3 sets of 3 forced reps once per week. This method worked well and steady progress started. Soon I was convinced that 600 lbs was within my capabilities and began the physical work necessary to attain it. Then, 10 months later, with tons of hard work, 600 was mine.
When I reduced bodyweight and became a 242-pounder, I realized some changes were necessary in my bench program. The forced reps had run their course of usefulness and the new leverages and bodyweight had to be trained differently. After I reduced to 242 my bench bottomed out at a tough single with 425 lbs. I needed to build basic power, so my new routine was to bench twice per week with one heavy and one light day.

The heavy day was centered around 3 heavy sets of 3 reps done with max weights. If I felt tired or overworked I still did 3x3, only with a lighter weight. Sometimes on light week was not even to recover, so two or three weeks were done light. This system worked well and my bench slowly approached and then exceeded the 500 lb mark.

Assistance work was utilized. The favorite and most effective for me was the close grip bench press with a 4-inch hand spacing between the hands. I also liked the lying triceps extension with the EZ-curl bar. Both exercises  were done with 4 sets of 6 with as heavy a weight as possible.

Eight to ten weeks before a contest I would discontinue all bench press assistance work. During this period I would concentrate on the bench press, going as heavy as I could for 3 sets of 3 reps. I would back off, rest, then build the triples back up and surpass my previous heavy triples. This small and simple cycle would be repeated until it was time to start easing up, usually ten days before a contest. At this time I would test myself with a heavy, but not maximum, single. From this heavy single I determined my opening attempt.

The bench press training should consist of a simple, intelligent, effective and productive routine. It is easy to burn out on the bench due to the heavy weights and small muscle mass used. Workout sessions and assistance work have to be scheduled to compliment each other instead of a schedule that cancels out the positive effect of each.

Patience, many years of training, mind power, making powerlifting the number one priority in your life, and hard word. These are the things that will make you a champion.

Bench press assistance work is composed of many exercises that involve a wide variety of muscle groups. First consideration had to be given to the chest, shoulders and triceps. These are the main muscles involved in the actual pressing of the bar from the chest to the lockout position. The biceps of the upper arm and the latissimus dorsi in the back contribute substantially to a lifter's control and initial drive. They should not be ignored, if a bench assistance program is to be comprehensive and effective.

In order to apply different assistance exercises most effectively, the bench press should be broken down into different sections. The first section involves lowering the bar to the chest. Arm biceps and latissimus dorsi give control to the descent of the bar, a very important part of bench pressing. The descent sets up the initial drive off the chest. If the descent is not good, chances are the bench press will suffer.

The second section is made up of two parts. In the first part the bar is pressed from the chest to midpoint. Pectorals and the latissimus dorsi give the bar initial drive off the chest. The second part is from midpoint to lockout. Here he shoulder muscles (deltoid) and triceps take the bar to lockout.

The following are assistance exercises that I have found to help the bench:

In any discussion of bench pressing, technique is always a big topic. I feel technique is a personal matter based on body type, leverages and your own personal style. There have been bench press records set with many different techniques. Some individuals have used the maximum allowable width grip, while others have used a narrow grip. Excluding body type and personal leverage, the wide grip would seem to be the most beneficial since the bar will travel the shortest distance and the largest muscle group (chest) will be most involved. I don't advise everyone to switch to this style, and I personally don't use it. I feel this is a personal choice, but you should experiment to find what is right for you. If you do decide to switch hand spacing, remember the change will require some time, since new muscles will come into play.

As far as actual technique, place yourself solidly on the bench with your eyes directly under the bar. Plant your feet firmly and then don't worry about them. Take whatever hand spacing you are comfortable with and either assisted or unassisted, remove the barbell from the racks to a locked out position. Once you have control of the barbell in a locked out position, begin your descent. The speed of descent varies, but you should always have control. I don't advocate the free fall approach, or an agonizingly slow descent. The weight should be lowered to the highest part of your chest. When the referee's signal is given, drive the weight from your chest. The bar should travel in a slight S shape. As the bar leaves the chest it will go slightly forward, then at about the halfway point, it will begin to drift back towards your head until lockout.

Whatever style of bench pressing you are using there is one rule that will apply. You should always use strict form. It is senseless to bounce the bar off your chest and raise your hips from the bench just to handle a few more pounds. Your training should be done in the same manner that you will have to do it in competition.