Think Down Not Out to Get Under the Bar - Mark Kaelin 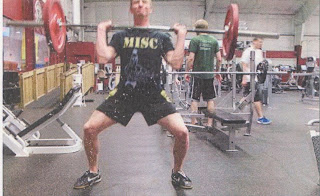 Lifter receiving bar by jumping out, resulting in high bar position
and poor set up to perform a front squat 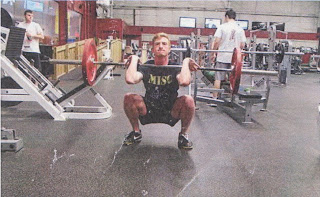 Lifter aggressively lowers hips to get under bar resulting in
a strong front squat position to stand with load.


Renewed interest in Olympic lifting has student athletes all over the country hoisting weights over their heads looking to improve athletic performance. One common problem I see all the time in these folks is poor receiving position. Rather than aggressively moving under the bar by lowering the hips, new lifters jump out or spread their legs apart to get under the weight. Unfortunately, in the beginning with lighter weights, this technique works. However, very quickly performance plateaus, as receiving the bar like this puts you in a poor position to support the weight and stand. Like Greg Everett says, "the goal of squatting in the context of the Olympic lifts is straightforward: to achieve maximal depth with the most upright posture possible." Let's look at the causes of this mistake and describe some tips you can incorporate into workouts to help your athletes get under the bar and finish their lifts the right way.


"You have to teach full squats for Olympic lifting, as catching the bar results in a full squat," says Joe Berning, director of the New Mexico States Exercise Physiology Lab. Since a strong front squat translates into strong cleans, why do so many athletes struggle with good form? Simple. Athletes learn very quickly that work = force x distance. Some of the most brutal workouts I've ever completed were built around squats. By limiting range of motion through inadequate squat depth, workouts are easier. Unfortunately, this bad habit turns up in other lifts (cleans and snatches), resulting in poor technique and failed lifts. So what do you do? First, emphasize form from early on. If you spy an athlete cheating, call them out. I know one strength coach who makes his entire team start their sets over if he spies one athlete cheating. Needless to say, it doesn't take long for everyone to fall in line.

In addition to emphasizing good form, Berning recommends "building base strength." Since Olympic lifts are built around squats, maximize your athlete's strength before beginning these lifts. This helps in two ways. First, this preparatory period increases muscular strength of the prime movers for these lifts and develops neural pathways in the brain and spinal cord, teaching the body how to move. Berning puts it this way: "If you can't front squat it, you have no business trying to clean or snatch it." Another factor that reinforces Berning's approach for building a level of base strength is that generally athletes can squat 131% more than they clean & jerk.

Secondly, a base strength program psychologically prepares your athlete. How many failed lifts in your gym are the result of mental failure rather than physical? Last time I went for a 1RM in deadlifts, I pulled 250 pounds with perfect form and good effort. Next I rested and put 10 more pounds on the bar, lined myself up, took a deep breath, went to pull, and barely got it off the floor. I rested again, tried and got the same result. I wish I could say that my lifting partner then yelled at me, I got mad, pulled 260 off the floor and continued on to top at 270. Unfortunately, that's not the case. I tried for a third time then called it a day. Why? Fear. During my rest break, I started thinking, "Man, should I be lifting this heavy? What if I get hurt?" I was done before I approached the bar; with my confidence lacking there was no way I would commit everything to the lift and follow through.

Athlete's perceptions play a role in their success. Cox, Shannon, and associates studied the link between subjective athletic performance and psychological skills (confidence, free from worry, coachability, and goal setting) in 627 collegiate student athletes (326 men and 301 women). What they found was that confidence was the strongest predictor for subjective athletic performance, meaning, athletes with high levels of confidence believe they can succeed. Mastering good form and increasing base strength improves your athlete's perceptions. A confident athlete with good base strength and technique puts fear aside, approaches the bar and proceeds to extend his back, hips, knees, and ankles while pulling with the traps maximizing bar acceleration. From there, they can receive as it descends in a strong front squat position, controlling the descent of the bar and instead of stalling at the bottom, extending the hips and knees to stand.

After building your athlete's base strength, and as a result of this confidence, it's time to introduce them to the lifts. Talking to coaches, I've found everyone has their system that works for them. Glenn Pendlay recommends training three days a week with workouts built around snatches, clean & jerks, squatting, and lifting circuits. I also like to see athletes in the gym three times a week but prefer to teach them the clean first and move onto the Olympic lifts. How you do this is an aspect of your work that you've built over time and is outside the scope of this article. However, it doesn't matter who I talk to or what I read again and again all programs are built around one factor, building strong technique.

The tool most coaches use to refine technique is verbal cuing. "Legs under not out!" is a common cue I use emphasizing the need for relocating under the bar in a front squat position to form a stable platform. However, many times athletes feel like that's what they're already doing and don't understand. At this point verbal cues aren't working and it's time to employ visual ones. Ben Carter, founder and head coach at Bluegrass Barbell Club in Louisville, KY. recommends taping a box on the floor of the lifting platform. After each attempt or successful lift, athletes can check their foot position and get immediate feedback on how they did.

Another method is videotaping. Thanks to smartphones and iPads, this technology is easy to find. For the best results, utilize programs with super slow motion capabilities as at this speed you can break down the lift and see where it starts to fall apart. "Play one of their teammates or a world champion simultaneously on the screen as that way they have similar views," says Berning. The value of both of these methods is the instant feedback the athlete gets. They see that even though they "feel" like they are lowering their hips to get under the bar, they aren't. Now they've seen and you can coach them through.

Keep in mind athletes can only process so much information. Only correct one or two points a day as, "too much information can lead to paralysis by analysis" says Berning. However, here too coaches differ on how to work on technique. Dan Barnett, owner of Crossfit Louisville East, suggests, "working on hang drills as they emphasize bar speed and getting under the bar quickly." I prefer to begin with the first pull and emphasizing through extension. Maximizing extension increases bar speed making it easier to drop under the bar in a strong front squat position. No matter what portion of the lift you begin with, make sure athletes approach and set up at the bar the same way every time, as repetition increases retention.

It's also important to watch your athletes as they lift and during rest breaks. Olympic lifting is not a bodybuilding workout or a metcon. During heavy load, low volume training sessions athletes need three to five minutes to recover between sets. Unfortunately, many athletes struggle with taking adequate rest breaks since they're highly motivated and associate taking a break with taking it easy. Nothing could be farther from the truth because as fatigue sets in, form deteriorates. Many athletes may signal they are ready to go after their breathing returns to normal. Don't let them. Fatigue causes poor extension leading to slow bar speeds, muscling up the weight, and wide foot placement versus a strong front squat position. When you're reviewing workouts, place special emphasis on how long the athletes need to rest. Stop athletes at the first sign of poor form and either make t hem rest more or call it a day. At this point, continuing to train only results in reinforcing a bad habit.

In his article "Six Truths of Olympic Lifting," Greg Everett states, "relocation under the bar is an active movement." It's a front squat. Many times beginners want to jump out, not go under the bar to relocate. There are many reasons for this: inadequate strength, bad form, or just lack of confidence. Whatever the cause, address it with the athlete. Develop a plan and watch their performance improve. Once an athlete begins to actively relocate, their lifts improve, and nothing changes an athlete's behavior like success.