In Britain a large amount of forward and upward hip thrust is sometimes taught. In other countries the upward action is emphasized. This affects the parallelogram of forces.

The hip thrust is divided into forward and upward components, and the varying magnitudes of these components obviously have different results. These components tend to rotate the lifter forwards and backwards depending on his position. The result is that those who jump back are most likely to rotate forward and those with a big forward hip thrust will tend to rotate backwards. However, compensatory acceleration can reduce this. The elbows coming forward in the clean is a good example of this.

To investigate theories further regarding forward travel being due to eccentric thrust and parallelograms of forces, many tracings were done of Al Murray and Mike Pearman, two typical British stylists. The loops of these two lifters confirmed our views as both emphasized forward and upward hip action and reached positions of 85 deg., 93 and 93.5 deg., in both squat and split styles. Obviously they have their hips much further forward than most world top liners,and although obtaining full extensions, the line No. 2 was also nearer the vertical.

In the light of knowledge gained from this study, we believe that when analyzing film in addition to the frame of maximum extension before the first foot leaves the platform, one of the key positions should also be the last frame before the body finally comes in contact with the floor.

Miyake, Foldi and Stugov use the greatest layback in extension and the heavyweights much less.

Kaplunov and Tamraz have personal centers of gravity will forward, but because of entirely different body positioning.

Before progressing to the next stage it should be noted that now, with illustrations we have at our disposal, it is possible to calculate the ANGULAR VELOCITY in the angle through which a body travels per second.

The figures quoted in Snatch timings cannot give a good picture unless compared with the appropriate illustration. It can easily be appreciated that a lifter who starts with a high shoulder position and does an incomplete extension will have moved his back through a much shorter radius than the man who starts with a low shoulder position in relation to his hips and does a very full hyperextension.

The former will have less Angular Velocity of the back as he had moved it through a shorter range in the same time. 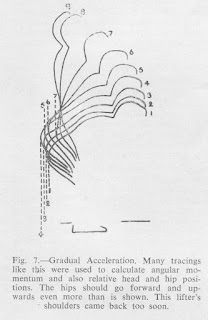 The trunk moves from position 1 to position 8 in 1/2 second. By measuring the angles, angular velocity can be calculated. The movement of the femur can also be judged approximately but the intervention of the bar makes accurate calculations difficult for the average person.

For convenience, the angles of the back were measured through 8 frames  (1/2 second) and the figures doubled. 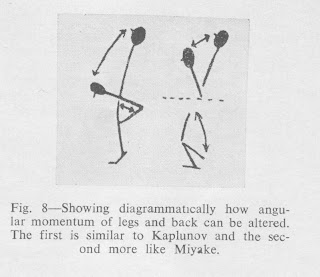 Kaplunov, 154 degrees; Vlasov in one of the snatches which got to arms length and missed, 106 degrees; Plyukfelder, 115 degrees; Makinnen, 174 degrees.

Other body angles must also be considered; for example, the thighs are very important in the pull for the snatch and also the clean. Let us compare the figures of Miyake and Kaplunov. Here are the relevant statistics from lifts at Budapest where Miyake showed better technique than displayed a year earlier --

Miyake's back starts at 40 degrees. In half a second it moves through 40 degrees.
ANGULAR VELOCITY = 80 degrees.

Kaplunov's back starts at 15 degrees but in half a second moves through 77 degrees.
ANGULAR VELOCITY = 154 degrees.

The range of movements of the respective femurs have been eliminated. Miyake's thighs move through 65 degrees in 1/2 second.
ANGULAR VELOCITY = 130 degrees.

Kaplunov's thighs start at 30 degrees and move through 70 degrees.
ANGULAR VELOCITY = 140 degrees.
Where the sum of Miyake's figures total 210 degrees (180 + 130), Kaplunov's figures total 294 degrees (154 + 140).
The result is that Kaplunov pulls the bar much higher AT THIS STAGE OF THE LIFT.
Remember, the details throughout this book apply to the snatch. There are considerable differences in pulling for the clean, etc.

Linear Velocity
The linear velocity imparted to the bar will depend on the foregoing figures and also the length of the athlete's back and thighs. If two lifters pull with the same angular velocity then the one with the longer measurements, thus giving a greater radius, will give greater speed of the bar. This is one of the reasons why a tall lifter can move the bar a greater distance than a small person can in the same time.

Angular momentum is transferred from body to the bar and at full extension the body begins to lower while the transference of momentum should result in the bar continuing to travel upwards. The height to which the bar rises depends on the amount of momentum and velocity. When the feet are back on the floor it is possible once again to apply a considerable amount of force. However, at this stage a speedy but controlled lowering of the bod is desirable. The arm and shoulder muscles should work concentrically against the bar to bring the body into the finished position at a speed greater than the pull of gravity. We estimate the body should go down at approximately double the speed of gravity -- the body should move about 2 ft. in 1/4 sec. It is emphasized that the amount and direction of pull on the bar is of vital importance. The greater the force at this stage the faster the movement under the bar -- but it is at this stage that many good pulls go wrong. The pull of gravity would cause athlete and bar to drop at the same speed(1 ft. in 1/4 sec.) if without momentum or support. This means that although the feet are back on the ground and force can be exerted, any great force from the legs will tend to retard the speed of dropping under the bar. The main effect, in our opinion, is that the feet being fixed will make the reaction of the pull be absorbed not by the body as a whole but by the upper body, particularly the head.

We feel that electromyograph studies of this stage of the snatch would be most enlightening.

The lifter at this stage will be pulling extremely hard with the arms and shoulders, but his leg and hip muscles must be comparatively relaxed on landing. Hence the expression, "Pull like a horse and land like a dancer." Unfortunately, many lifters reverse the procedure.

It is only when a lifter is approaching the lowest position that he applies any real effort. This should be thought of as "applying the brakes" and not as many coaches and lifters have thought, an effort to stop high so that they can go lower if necessary and adjust the body positioning en route. This misconception is still prevalent amongst squat stylists. Always aim at getting the lowest possible position and only "apply the brakes" towards the conculsion of the leg movement while the amrs exert maximum effort throughout.