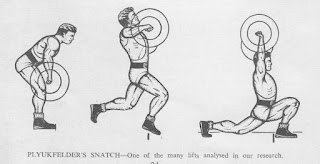 In our latest study before publication, starting and finishing positions were traced from as near side views as possible, in most instances direct side views were used. Veres' being nearer the back of the platform gave a slight angle for filming. In order to give some degree of uniformity to the finished charts, the various distances were calculated in FOOT LENGTHS, e.g., Stogov's front foot moved forward until his heel was 3/4 foot length in front of the starting position of that toe. Mannironi's rear foot traveled so far that the toe landed two foot lengths behind the starting position of the heel.

This not only gave uniformity but also gave a better comparison of respective width of splits. Had this not been done, small men like Stogov would have appeared to have a very short split compared with big men like Gubner. However, this procedure obviously does not give 100% accuracy as large men with small feet or small men with large feet would give a distorted impression. Observations lead us to believe that this factor did not affect the figures to any noticeable degree.

Having set out the respective amount of travel for front feet and back feet, the distance between the feet was measured again in foot lengths. Assuming that the average lifter's boot measured 10.5 inches, calculations were made to ascertain the amount of split in each case and listed in order of merit. Working on the original figures of foot lengths, rather than on the new ones which were only taken to the nearest 1", an average width of split was calculated.

This survey shows that none of the current top lifters go as far forward as the average British lifter imagines. It is obvious that many lifters are pulling the bar in a straight line (approx.) and even backwards in many cases. The width of split, however, would appear to be in keeping with British conceptions of a good lift as is the finished body positions and distribution of weight if one disregards the starting position of the feet.

Here is the list of foot spacings which must be read bearing in mind the method of measuring to gain uniformity. If for example Zirk's feet actually measure 11.5" as opposed to the 10.5" average used, then his width of split would really be approx. 28.75". If Kaplunov's feet measured 9.25" (which we believe is the case) then the width of split would actually be 32.25" approx.


All these figures are from the HEEL of the front foot to the TOE of the rear foot. 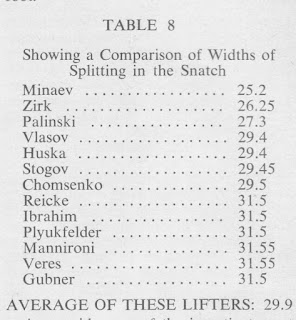 As a guide, one of the investigators at a fraction less than 5'8" in height generally averages approx. 28" in the split. Kaplunov showed the widest split of all, by a considerable margin, on the lifts measured. On the same scale as the chart his measurement would be 36.5 units. Measured as accurately as possible, our measurement showed approx. 31.8 to be the actual figure. Or, calculating from the chart if his feet sized 9" it would be 31.5, if 9.25" split is 32.25 or if 9.5" split is 33.25 and so on.


The Rear Foot in the Split Style


It was for some time believed that the rear foot landed first because of the smaller range of movement it had in the split (the extension of the back leg being less than the flexion of the front leg). A further reason for the back foot landing first was that is was said to travel a shorter distance by keeping near the floot, etc. Actually we now consider that these are not the reasons for the faster landing of the rear foot. In the case of the current champions the rear foot has farther to travel than the front one and in addition the front foot is favored mechanically.

The flexion at the knee and hip joints reduces the moment of inertia as the lower part of the leg is brought nearer to the hip joint and angular velocity increases. The hip flexors, supported by the abdominals, being mainly responsible for this action. The work of these muscles is reduced because of the bending of the leg.

The reason for the back foot landing first is very simple -- the performer makes it move faster! At some stages it is moving approximately twice as fast as the front foot.

It is interesting to note that some performers slide their back foot along the ground after landing, but this is not a recommended practice.

Where the foot travels obliquely from the center line to give a diagonal split, or transference of bodyweight causes the body to be moving away from the side of the rear foot, there is again a lack of stability. This inhibits muscular effort as the attention of the lifter is diverted to maintaining position as well as lifting the weight.

ANY LACK OF STABILITY WILL RESULT IN INEFFICIENT MOVEMENTS AND OFTEN POOR DIRECTION OF EFFORT.

There is usually stability if the lever is at right angles to the fulcrum but where the lever rests obliquely there is generally less stability.

In addition to the mechanical aspect, there are other important anatomical and kinetic reasons why a straight line or thrust is desirable. The 'thrust reflex' in plantar flexion is well know to those who have made a deep study of human movement analysis. There are many good examples in walking and running be we will confine ourselves to its application in the snatch.

As the rear foot touches down and becomes weight bearing, the toes are spread slightly and metatarsals stimulate contraction of the foot flexors. This in turn results in contraction of calf and thigh muscles and there is even increased tension in the muscles of the trunk.

It should be kept in mind that this thrust reflex is also well demonstrated during the pull before splitting or squatting.