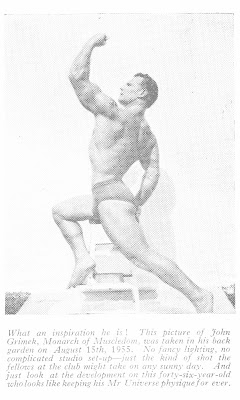 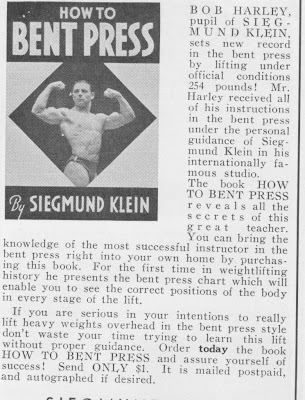 Mind in Relation to Weightlifting
by William Oliphant (1940)


He was concentrating on the weight of the bar and had entirely lost sight of the lift.

You must look ahead all the time. If a man in business wants to improve, he looks ahead, and by looking ahead, he gets ahead. The same thing applies to many sports, and especially to weightlifting.

In business, in sports, and then again in weightlifting there may be room at the bottom of the ladder for men with weak concentrative power, but I can certainly assure you there isn't any room at the top.

To reach the top in any line of endeavor a man must work, he must take care of himself if he ever hopes to become a success. The weight-lifter must stick to his weight-lifting; practice regularly; he must exercise; he must be moderate in all things such as late hours, etc. All this requires willpower, but fortunately the regular observance of this mode of lifting develops Will Power.

Here a a simple little method you can put into effect which will, at one and the same time, improve your knowledge of scientific lifting positions, your development, and your will power.

During a workout with the weights, occasionally make three or four attempts with a weight anywhere from 10 to 30 pounds under your top lift. Buy this practice over time you will not only develop better staminal power and confidence, but when your strength begins to fail you will realize more or less instinctively that you must dip a little lower or much more quickly. or lower and lock the arms more correctly and turn the wrists over a little better, or you know that your last attempt will be a failure. This practice can be applied to all lifts.

My lifters all train along these lines, and my middleweight champion, Joe Sklar, has practiced this method and brought it to such a fine point that he takes 290 and sometimes 300 lbs. and jerks it overhead, and instead of getting set for his second, third and sometimes fourth attempt, he allows his knees to bend as the weight comes to the chest and immediately jerks overhead again. By practicing on this method, Joe not only improved his style but rapidly increased the poundages on all his lifts.


A mistake I would warn young lifters especially against is copying too closely the style of some lifter they may admire, or some lifter whose style may appeal to them in a contest. To such a young lifter I would say first of all, ask yourself the question "Is my physique the same? Would this particular style suit me?" You must remember that some lifters have stronger legs in proportion to their arms, while others have much stronger arms and shoulders in proportion to their legs.

It suits some lifters to squat under a weigh and quickly lock their arms in a supporting position, keeping the back straight, while others like to split and dip quickly throwing the bar slightly backwards, and in some cases forward in order to lock the arms. The best advice I can give in this respect is to try all positions of styles on your lifts and exercises and find out just which one suits your own individual type of physique, and then train accordingly. This is the only road to success. Don't fight your body type.

In my opinion, no man can ever be a first class weight-lifting instructor if he has any set ideas as to the main principle which should be run through a lift. If he insists on his pupils pressing or pushing through regardless of physique, or has only one style on the snatch or jerk or other lifts which may be used in training, he may probably turn out some good lifters, but there are others who might have done well -- and perhaps better -- had they been shown a style to suit themselves.

If you are training at the club by yourself, or without a good instructor, or at home in the back yard or basement, you must bear this in mind and try to develop a style to suit your own individual type of physique. If you are practicing the three Olympic lifts, the main principle to follow on the snatch and jerk especially is speed. Aim at speed all the time. I have seen many lifters whose style was considered to be good, and yet they have been able to get another 10 or 15 pounds on a lift after being made to realize that they were lifting just a little too slow.

Many have told me that they have included a lot of heavy deadlifts in their training as they have been led to believe by doing so they would develop great strength in the back muscles. Probably they did, but on the other hand too much work on the deadlift has a tendency to slow up the muscles, and as an antidote for this I suggest they practice a little tumbling, hand balancing (Hepburn), skipping and even a little boxing with the object of gaining speed and counteracting the effects of slower work with heavy weights.

Another point you should try and figure out is how often you should train or practice every week. Certain individual types can train every night of the week with advantage, while there are others who reach their best form with only one real good work-out a week, say on Friday night for example, spending the earlier part of the week with quite light work, perfecting positions, style, etc.

Remember, champions can be defeated and records are only made to be broken. What one man can do, someone else can do and do better.

When you are practicing your lifts, work with a light barbell in front of a large mirror if possible. If you do so, compare yourself with some appropriate lifter or champion you may have seen; ask yourself if you are really satisfied with your positions; are they neat, smart or quick enough. Take into consideration every move you make and figure out if there is a good and definite reason for every move.

One important thing you must remember is this: a record can only be accomplished by bringing as many muscle groups as possible into play at the same time.

The average individual or novice at weight-lifting brings the bar up to the chest by action of the arm muscles primarily. This, of course, is wrong. With a little training and weight-lifting practice he gradually begins to use his legs as well, although he may not at first be able to time the two sets of muscles correctly. Constant practice overcomes this, however, for he gradually gains coordination of the mind and different muscle groups and the timing and movement becomes more or less mechanical.

The first time I witnessed Tony Terlazzo lifting over 300 pounds in the two hands clean & jerk I was quick to notice on that clean that, besides using the arms and legs together, he also brought into play the large back muscles, trapezius and erector spinae, and together with working the three groups of arms, legs and back muscles he also threw his body backwards slightly, compelling it to act as a lever. His Clean movement from the floor to the chest is done so quickly that one would almost think he lifted the weight by pure strength alone, yet the whole thing is done so neat that it is made to look like a very simple operation. When he jerks the bar overhead he makes the movement look even more simple.

There is no doubt that Tony is very strong, but he is extremely scientific and clever too. His clean & jerk is a perfect lift. The whole truth of the matter is that Tony has reached the acme of perfection at weightlifting and makes the demanding look simple and easy. After all, that is the essence of scientific weightlifting.

Determine for yourself if you are using sufficient groups of muscles when performing any given lift. This is important, for it will gradually pave the way to much all around improvement. No matter how good you may think you are on a lift, don't kid yourself that you can't improve. Don't specialize too much on any one lift, or set of lifts like the Olympic three. Try other lifts as well, a sort of all-round lifting, for many times you will find out that what you learn from one lift often helps another, and besides it gives certain muscles a chance for a good rest.

If you happen to be one of those who practice weightlifting once or twice a week at some club or gym and have no weights of your own at home, why not follow this suggestion:

If you have a fair-sized mirror in your bedroom or another room, take up your position for the different lifts and run through them smartly and quickly, trying to be as scientific about your appraisal as possible, with the thought in mind that you must identify and memorize the groups of muscles brought into play and combination at various stages of each lift. This may be of use when struggling with a weak spot in any lift. Concentrate on these lifts as much as possible, just as your would with a heavy weight. Get a piece of three-quarter pipe or a broomstick handle and use this while going through different movements. If you will give this seemingly simple method of getting a lot of practice in with a minimum effort on these chosen movements a fair trial, you will be more than repaid with results for the time you have spent. Boxers go through a lot of shadow boxing in their training to improve timing and direction for different movements, dupes and bows, and lifters can reap benefits just as good by doing practically the same thing.