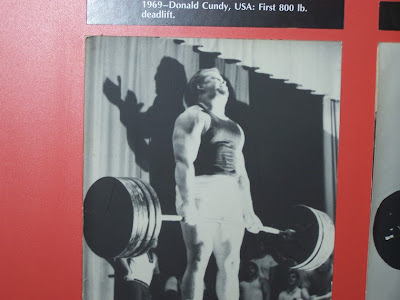 If you were to say Don Rheinhoudt, you’d be close, but big Don only won three Senior Nationals. If you guessed Doyle Kenady or Paul Wrenn, guess again, as Kenady won two Seniors and Wrenn also won two.

Amazingly, the name of the man who won four straight Senior National titles in the Superheavy class is practically unknown today. This man is Donald Thomas Cundy.

Don Cundy won the Senior National Powerlifting championships from 1967-1970 and never weighed more than 283 in doing so. In fact, his bodyweight fluctuated from 263½ to to 283 and thus, with the exception of Jon Cole, Don Cundy was the lightest person ever to win a Senior National Superheavyweight title.

Cundy’s career began in 1965. That same year at the Minnesota State Power championships, the 6’3”, 263½-pound Cundy made his presence known with a 735 American record deadlift. The record would soon be taken back with a 745½ deadlift by Gene Roberson, however. Undaunted by his short-lived record, Don quietly continued to perform his unconventional stiff-legged deadlifts on the bench. In 1967 at the South Minnesota Powerlift championships Cundy deadlifted 761 for another new American record. It was then that the red-headed Cundy, who was nicknamed ‘The Pink Elephant’ decided to enter his first Senor Nationals in Pennsylvania. Don weighed 280, but was pitted against George ‘Ernie’ Pickett and Bob Weaver, both of whom weighed over 300 lbs. Don benched 490, squatted 600 an deadlifted another American record of 784 to win his first Senior National title.

With one Senior National victory scored, Don tried again in ’68 and again emerged victorious with lifts of 480, 700, and a 755 deadlift. Although weighing only 280, Cundy once again defeated the 307-lb. George Pickett.

The year 1969 proved to be one which would serve as Don’s greatest test, and greatest victory. Cundy was to do battle against the likes of some of powerlifting’s immortals. 275½-lb. Cundy faced 301-lb. Russ Fletcher, 339-lb. Jim Williams, who was to break a National record with a 600 bench in this meet, and Bob Weaver, the then current record holder in the total and 1966 champion.

Weaver broke an American record in the squat with 807, and Williams a National bench press record with 601½. This put a great deal of pressure on Cundy with his 490 bench and 735 squat. However, after failing once, Don pulled an American record 801½ deadlift to win his 3rd Senior National title, become the first man in history to deadlift 800 lbs. and finally became the one to better Hermann Goerner’s 793 record made in 1920.

After having the best meet of his life, Don put his reputation on the line in 1970 in Louisiana by once again entering the Senior Nationals. This was not to be an easy task. Once again, the 283-lb. Cundy faced 300-plus Jim Williams and 300-lb. Russ Fletcher, who was to squat a rock-bottom 810½ American record at this meet.

Although up against tremendous competition, Cundy benched 500, squatted 755 and deadlifted 785 for an unprecedented 4th straight Senior National superheavyweight title; an accomplishment unequalled to this day and a record which is not likely to be broken soon.

Don was not only a fine lifter but a prolific writer as well, who wrote articles for Iron Man and Muscle Builder which will always be helpful to both the novice and advanced lifter.

Don Cundy was living proof that prudent training and perseverance could conquer the odds against becoming the winningest Superheavy in Senior National history.