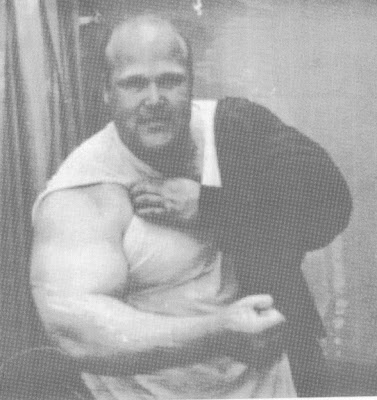 
In the early days of powerlifting, back in the 1950’s, there was established in California an outdoor gymnasium called the Muscle Beach Weightlifting Club. This gym was enclosed by a wooden fence and was equipped with a wide variety of weights and machines. It was here at the Mecca of Muscle that many of powerlifting’s pioneers congregated. One of the largest and strongest of these behemoths was Chuck Ahrens. Chuck was known as weightlifting’s ‘Mystery Man’ because he was of a quiet, reserved nature and refused to take off his shirt and pose for cameras. Only in one rare photo taken for Muscular Development did Chuck roll up his sleeve.

As was stated before, Chuck Ahrens was of Brobdingnagian proportions. When walking along the shores of Muscle Beach he resembled one of the huge saurians which may have roamed there millions of years ago in the Jurassic period.

Chuck stood 6 foot in his prime and weighed 330 pounds, most of which was distributed in his upper body. He had a normal, non-expanded chest measurement of 58 inches. This huge torso was capped by shoulders 28 inches wide. Attached to these prodigious deltoids were arms which measured 22 and three eighths inches in circumference.

Not only was Chuck Ahrens ponderous in appearance, his lifts were equally gargantuan. Ahrens specialized in odd lifts. His favorites were the one arm dumbbell strict press, the two arm dumbbell press and the triceps extension. The dumbbell presses of England’s Strongbow contests are quite impressive, but compare those 160-pound presses to Chuck Ahrens pressing strict, with one arm, 310 for 3 repetitions! He also performed 235 for 5 consecutive repetitions standing with a dumbbell in each hand. While seated on an incline board set at 90 degrees, Chuck pressed two 225-pound dumbbells for 5 reps!

In the lying triceps extension, Chuck’s style was to hold the bar overhead, lower it behind and below the head and then extend it up overhead. In 1956 Chuck performed a single in this movement with 400 pounds.

Unfortunately, Chuck’s quiet personality kept him away from actual competition, however, his tremendous strength and the reputation that followed served as an inspiration to myriads of young strength athletes. Even to this day, Chuck Ahrens strength awes us and earns him the well-deserved title of strongest upper body specialist of all time.