Epitaph for a Strongman – Mac Batchelor - by Vic Boff 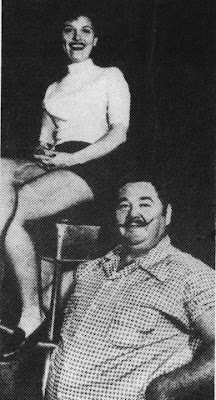 Epitaph for a Strongman – Mac Batchelor
by Vic Boff (1986)


On August 10, 1986, another great chapter in the history of Strongmanism was brought to an end with the passing of Ian Gordon Batchelor.

Not many young people today know who “Mighty Mac” was, but to thousands of old-timers, who grew up in the same era and had the good fortune and thrilling experience to witness or read about his unbelievable feats of strength, Mac’s legend lives on.

In his prime, Batchelor was a world class strongman. From 1931 to 1956 he dominated the world of arm wrestling and was never defeated. He performed various feats of arm, wrist, and finger strength that may never be duplicated. Over the years Mac was featured in Ripley’s “Believe it or Not” and appeared in numerous television and movie productions. Mac was gifted as an artist, musician, writer, and lover and trainer of animals.

Mac Batchelor, by profession, was a bartender in Los Angeles. His fame as an arm wrestler spread throughout the country. Customers, athletes and strongmen came from everywhere to challenge Mighty Mac. He was sometimes even woken up in at night for a test. He always won. Always. On April 27, 1952, the New York Daily News in their Sunday magazine featured Mac in a story titled “Ten Titles in a Barroom.” One of Mighty Mac’s incredible feats, according to this article, was crushing 63 beer caps in his fingers to fill a beer bottle.

In 1956, John McCallum, a writer for Strength & Health magazine, visited Batchelor at the tavern where he worked, to see firsthand if all those stories were true. Mac reached under the bar and brought out four bottle caps. He jammed on between each finger on his right hand and squeezed tightly until all four caps crumpled under the stress. He took a cork top from a bottle and crooked his forefinger around it. He put his thumb against the top of the cork and snapped it in two. He then took a threaded bottle cap and after putting it between his thumb and forefinger crushed it WITH THE TWO FINGERS HELD STRAIGHT. Finally, he put his hand palm up, down on the bar, and asked McCallum to hold down one finger. John put both hands on Mac’s middle finger and leaned on it. Mac gave a flip and both of McCallum’s hands flew off the table. McCallum tried another finger with the same results.

The quality of man-power that Mac projected can be appreciated when you consider his mammoth proportions. Mighty Mac stood 6’ 1½ inches, weighed 300-330 pounds, with a 20 inch neck, 19¼ inch arms, 52½” chest, 19 inch calf and 8½ inch wrist. These are cold measurements.

Batchelor worked out in a small but well equipped home gym. His training consisted of a powerlifting routine performed twice weekly. The rest of his training was devoted to the forearm and grip routines. Mac’s warmup was unbelievable – performing 20 speed squats, cold, with 350 pounds – without belt or wraps.

Peter Vuono, a strength historian and good friend of mine, wrote of Batchelor’s amazing career in his illustrious articles, “Pioneers of Power” in Powerlifting USA. I quote in part.

‘In 1948, at the Pacific Telephone Company yard in Los Angeles, Mac shouldered a telephone pole over 40 feet long and weighing between 700-800 pounds. He then walked with it for over 300 feet before heaving it off. In a movie studio lot that same year, Batchelor picked up a small horse weighing 600-700 pounds on to his back, walked 20 feet with it and then carried the animal up a steel ladder 16 feet high. On several occasions while weighing only 275 pounds, he performed a backlift with a weight of 3,000 pounds.

In grip strength, Mac was unsurpassed. He could pinch grip an 80 pound plate in each hand and walk 30 feet. Each plate was 1½ inches thick and 30 inches in diameter. He pinch gripped a steel facing plate weighing over 165 pounds with one hand.

While weighing 300 pounds Mac could hang on to a vertical climbing rope with one hand, WITH HIS THUMB UNLOCKED. He could grasp a large 2 or 2½ foot high wine bottle at the tip or neck and then work the bottle upward by working the fingers downward. THE BOTTLE WAS FILLED WITH LEAD SHOT. He could pinch grip a beer bottle with both thumb holding the lip of the bottle so that it was parallel to the bar.