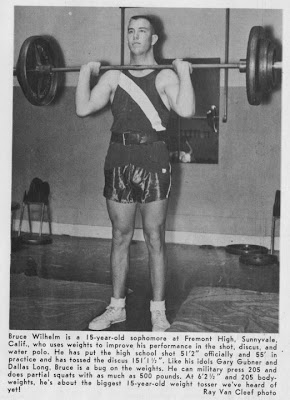 The Mental Approach
by John Grimek (1961)


One fact appears to be certain in the weight lifting field: whenever anyone fails to make substantial gains from training, he immediately begins to search for some nonexistent secrets that will assure him of success. He feels that he must find these hidden techniques if he is to attain his physical goal. Do they exist? If you mean certain magic-like special exercises, or super result-producing combinations of repetitions and sets, or a diet that will guarantee extraordinary results for all who follow it, then the answer is, they do not exist. But there is one often overlooked aspect of training that affects and controls one’s improvement, and this is the trainee’s psychological approach to training.

Undoubtedly a number of you have found yourselves wondering why some fellows seem to make faster improvement than others. An obvious answer, and one which applies in many cases, is simply that nature has provided certain individuals with bodies which are more receptive to the stimulation of exercise than others. Most bodybuilders and lifters share this opinion. But there is more to it than this. The average lifter instinctively seems to sense this, but when asked about it is never quite able to put his finger on it. He knows an explanation does exist, but hasn’t the vaguest idea what that explanation is, and hence the answer must be that it is a “secret.”

In trying to figure out why some gain quickly and others not at all or only slightly, we must not lose sight of all the factors involved. For instance, how does the individual train? What method of training does he follow? And most important of all, what is his mental outlook in relation to exercise? The latter statement is especially important because it acts as a direct force in helping him to reach his goal if he steers it properly.

I realize that this statement may not impress you at this time, and you may, with some skepticism, ask yourself what’s so important about one’s mental approach? The answer is – EVERYTHING! Does this answer surprise you? Does it raise doubts in your mind? If so, don’t fret, because many who haven’t given this matter any thought find it hard to accept. It’s true, nevertheless, when one has the proper psychological approach it bolsters his desires and intensifies his drive, gives him that extra energy he may need to reach his goal. Moreover, the right attitude is equally as important as selecting the right training system.

Let’s delve into the subject more fully. Let us take two fellows with equal physical qualities and who are following identical training systems. One of them, however, feels that he will not accomplish ANYTHING by employing this method so goes about it listlessly. The other one greatly favors and believes in it and tackles his training more zestfully. It’s easy to guess, from this description, which of the two will make outstanding gains. It’s safe to say, too, that the one who likes his training will, in all probability, make three to five times the improvement of the other fellow, simply because he believes in his efforts. Of course, it’s natural for one to conclude, under the circumstances, that this lack of improvement is solely due to his failure to put “his all” in his training. And this is correct up to a point. The fact remains, however, that because his mental approach is so impotent and lackadaisical he can’t push himself to an all-out effort. It acts like a psychological block that prevents him from enjoying such training, dampens his spirit and restricts his physical output. Such individuals subconsciously accept a defeatist attitude and become mentally depressed, thus voiding the possible benefits that may accrue from their efforts.

You must learn to recognize that a vast difference exists between those who know that their training will benefit them, and those who feel it is utterly useless. It is also true that those who enjoy their training will invariably benefit from it because they seem to train harder. So it’s plain to see how much one’s mental approach works.

But the question of interest to you is, no doubt, how does this affect you? I’ll try to explain by saying that when your mental attitude is optimistic about training it helps to bring you within easier reach of your goal than when your outlook is pessimistic. For this reason you should aim towards the pinnacle of success and not at the halfway mark. And with your mental facilities all geared up you shouldn’t have any trouble attaining your ultimate aim and I intend no pun with the phrase ‘all geared up’ here.

Along this line let me mention a very striking example of the strong psychological approach – that grand oldtimer, Maxick. If anyone had the power of mental control in relation to strength, he did. It’s been said many times that he would go into deep concentration after each training session when he wanted to accomplish a specific lift or some unusual feat of strength. Never once did he recognize defeat, or that he would fail in his objective. His thoughts always dwelled on the positive outcome of his training labors, and that he would perform the feat he desired when the time came . . . and he always did.

Another outstanding example of this type was Tony Terlazzo, former world and Olympic champion. He also maintained a positive mental approach. Weeks before a contest he would affix certain poundages in his mind which he hoped to succeed with, and then he trained towards that goal. There were times when he overshot himself, again no pun intended, that’s true, but he realized that in order to lift progressively heavier weights he must etch these poundages upon is mind so they would not frighten him when the time came to lift them. Eventually he got so far ahead of everyone in his class that he would often try to lift a higher total than those in a heavier division, and often succeeded. The whole idea proved to be a terrific incentive that forced him far ahead of his competitors and made him the champion that he was. Of course even he could not have forged so far ahead had it not been for his positive mental approach to training and competing. But he was one of the very few to recognize this principle and used it to advantage.

Tommy Kono, the present world and Olympic champion, also uses this positive approach in his lifting. “Think big and you’ll lift big” is his motto. And he’s proved this point by making world records and making and winning many world lifting titles. Had he embraced a defeatist attitude instead of a positive one I doubt if the lifting world would have heard of him at all. Now do you believe that your mental approach is important?

In a small way the foregoing should help to explain why records in all sports are higher today than they were 15 to 20 years ago. For one thing, athletes have to prepare themselves mentally to shoot for these higher marks, consequently they approach them with greater confidence than if they didn’t adopt such lofty aims.