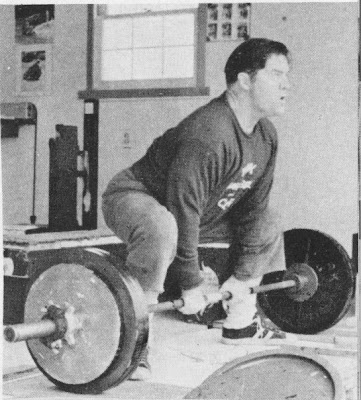 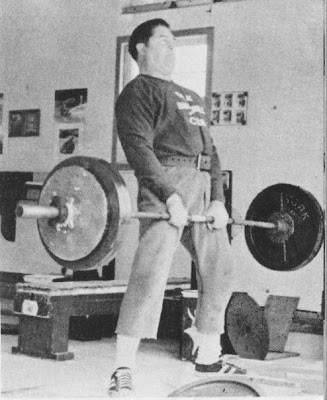 The Sumo Deadlift
by Don Cullinane (1976)


Peary Rader’s comment: This is a most important discussion of dead lifting style and training. As Mr. Cullinane mentions – the dead lift is often the key to a winning total and you can’t afford to neglect the lift. Last issue we had comments by another reader about “ditching the deadlift” because he felt it was a dangerous lift. I believe that if the lift is performed as Mr. Cullinane describes it will be found to be just as safe as the squat, since the back is kept straight and the lift is very similar to the squat in the muscles used. In fact you could almost say you were doing two squat lifts – one with the weight on the shoulders and one with the weight in the hands.

Over twenty years ago your editor used this very style in the deadlift, the main reason being that I was a very good squatter and so could lift more in the deadlift with this style since it used the hips and legs more than the back. It also prevented me from ever having an injury from the dead lift. This style is becoming increasingly popular. It looks a little strange but it works for many lifters. Similar wide spacing is being used for the squat, but the foot spacing sometimes becomes excessive in the squat and it is possible that a rule may in time be made regarding maximum foot spacing for the squat. In the squat some problems occur in getting low enough since the hips on some men will lock up before they hit a low enough position. The main advantage of its use in the squat is this locking action and then to come up the lifter leans forward slightly to start his recovery. It is tricky and possibly dangerous since you’re using bone strength at the lock position instead of muscle strength.

With powerlifting gaining popularity day by day, lifters who want to win contests must pay attention to all aspects of their training. This includes rest, diet, conditioning, building bulk, flexibility, technique and proper mental attitude. The deadlift is no exception. In fact, this lift is the real ace in powerlifting and a good performance is necessary to win.

Larry Pacifico – Mr. Powerlifter – is a good example of today’s successful powerlifter. He may be pushed and even beaten in a contest by M. Phillips in the squat; challenged by McDonald in the bench press; but when the deadlift is also thrown into the total he’s way out front in a class alone.

Reinhoudt is now being pushed by J. White in both the squat and bench press. However, as long as Reinhoudt has his ace, the deadlift, to rely on, he will retain his championship.

With lifters like P. O’Brien, Farchione, Wood, Kuc, Matz and Anello it is their great ability in the deadlift that makes them so tough to beat in competition.

The deadlift is so simple and easy one can do it without instructions, right? Wrong. Most of the lifters’ technique that I have seen (and I am a regular at the Nationals and Worlds) leave a lot to be desired.

To be a good deadlifter you must have a physique with the proper leverages, like long arms, a long trunk, short legs. Wrong again. While it is true that some men have a natural advantage due to the type of physique they possess, I believe almost anyone can adopt a technique that with proper training will enable him to do a good dead lift with a respectable poundage. On the other hand even the so-called naturals, unless they develop a good technique and stay in top condition, will be bypassed.

Until recently there were three basic styles of deadlifting. One was what might be termed the Anello style. This is for the natural deadlifters. Spack and Anello are the two lifters one thinks of when discussing this technique. The have relatively long trunks, long arms an rounded flexible backs. When they lift it looks like the power starts low in the back and then moves up the vertebrae like a series of electrical impulses. Their backs are rounded to start and straighten up as the lift progresses. To me Anello is the greatest deadlifter on the scene today. He has the natural physique for the lift, trains diligently for it, has great technique and terrific mental drive. His lift at this year’s Nationals in the 198-lb class of over 800 lbs. was out of sight.

The second style I call the O’Brien or Matz technique. These men are tall, relatively slender (wider than thick in the trunk) with straight backs and long arms. Usually they lift proportionately more in the deadlift than in the bench or squat. They use a shoulder width foot stance, pull mostly with a straight back and have a sticking point about knee height. Farchione may also be said to lift in this manner.

Pacifico, Phillips and Kidney, while not being constructed like the above named men, being thicker throughout the limbs and trunk, use a similar style but get more legs into their lifts.

The third style is usually used by lifters with short arms and trunks. Here the feet are kept relatively close together. Hands are closer together, just on the knurling. In this style the sticking point is usually the first three inches off the deck. Reinhoudt uses this form and does quite well with it.

Now we are seeing more and more lifters using a radical style where the feet are spread wide and the arms grasp the bar just inside the knurling while the arms are inside the thighs. We refer to this as the “Sumo” style, as the lifter, in setting his stance, does a movement similar to a sumo wrestler getting set. This technique is highly recommended for the lifter with short arms or trunk. The best execution of this style that I have seen was performed by Ravenscroft as he went on to win this year’s Senior Nationals. The lift was flawless, as were all his lifts on that day.

Let us now cover the deadlift in general, and then the sumo style in particular.

The most common errors in performing a deadlift are as follows:

The lift should be done by moving the weight up from the floor to the lockout position in the straightest line possible. Looking at a lifter from the side, the weight is pulled up through the center of his body. That is, it should rise in a straight line up through the legs and not out and around in an arc. As the weight rises, the lifter should be pulling up and slightly back into himself. The weight should be hugging his body all the way up. This is accomplished by keeping the head up and back on the traps.

Specifically, then let us cover the performance of the deadlift sumo style.

Approach the bar and spread your legs so that your shins are about 6” from the start of the knurling. The bar should be about 1” in front of our shins. Rotate your thighs outward and place your feet at an angle pointing out slightly. Make sure your feet are firm on the platform. Next, bend over and grasp the bar on the inside of the knurling. Your hands will be on the smooth surface. Arms are straight and are inside the thighs and along your trunk. Keep your buttocks very low, the back is very flat and almost straight up, head is well back on the traps with the eyes looking at an angle between straight up and straight out. Let’s say the eyes are at about a 130 degree angle. Now we are ready for the lift itself.

Exhale, then inhale through the mouth, slowly take up the slack in your arms and body and then slowly inch the bar off the floor smoothly. Once you have it started, increase your momentum and consciously push the floor down and away with your leg power. The weight should be scraping you all the way up. Concentrate on pulling and flexing those legs, forcing your head up and back on those traps. Once you do a few in the groove you will really get to like this style and the feel of it. After a session with this style of deadlift you will feel it in the legs, traps and the lower lumbar in about that order.

I feel, for the lifter with short arms an trunk, this style offers several advantages over the more conventional styles. You can really get the buttocks low while keeping the back straight. As the bar comes up to knee height you can keep the bar in tight as it does not seem to move out away from the body as in the other styles. Since the back is almost straight from the start of the lift most of the work is done with the legs and traps. The slow even pull to start is most important. Don’t rush or jerk the weight. Make sure there is no slack or bend in the arms.

Since this is a new style for you if you decide to give it a try, plan on using it for at least eight weeks. For the first few weeks I would suggest you do a lot of reps with medium weight. This will prepare the back for the work to come and also make the neuromuscular paths second nature to you. Being something of a purist, I don’t believe any other assistance exercises are necessary aside from the lift itself if you perform sufficient reps. I recommend you practice it twice a week for six or seven sets per workout. In the first workout I would go light and the second workout heavy. For example, the first workout might go 10 reps, 8-6-4, then 3 sets of 5 reps. The second workout might be 10-8-6-4, then 3 sets of 3 reps. Add weight when you are successful with your plans. You have to be your own coach to some extent.

Following the deadlifts I recommend some close grip chins for stretching and some situps to get the antagonistic muscles. This practice can help cut down on injuries.