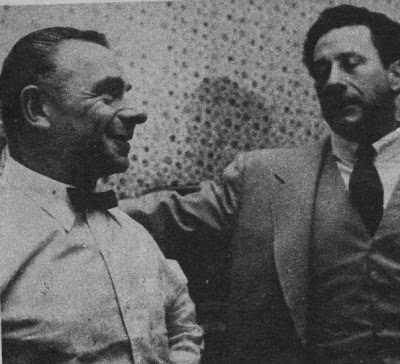 All arrangements were made for the show to be held Saturday evening, October 20, 1933. Scales were tested by the City Weight and Measure Department. Officials were present in the persons of Dietrich Wortmann, Mark H. Berry and Sam Oldstead. Bernarr MacFadden was the guest of honor this particular evening. We had, as can be imagined, a distinguished group of famous culturists. I was ready now for the first lift, which was the Supine Press, also known as the Press Flat on Back. I accomplished 288 pounds, and then tried 300 pounds, but failed to succeed, though I have pressed this much in practice. M next lift was a Two Arm Military Press from behind neck, and I succeeded with 206 pounds. Muscling out two kettlebells was next on the list. The weights weighed 63¼ pounds and 63½ pounds. These were pressed over head, then lowered from above and held to the referee’s count. This lift too was done with the strictest of form, the body was held in military position throughout the whole lift. There was not the slightest leaning back, the heels were kept close together throughout the lift. A Right Arm Side Press was next on the list. The barbell was first lifted to the shoulder with two hands, then letting go with the left hand, and getting firmly braced, making sure that the right elbow did not touch any part of the body, legs perfectly straight at the knees, I pressed 174¼ pounds. I followed the English rules on this lift, they being the strictest.

Next I performed what I considered the greatest lifting feat of my career up to that time. Two One Hundred Pound dumbells were placed on the platform. I cleaned them to the shoulders and then performed what is known as the See-Saw press with these weights, doing alternate pressing and repeating the same ten times with each hand. Mr. Berry was strict about a certain technicality, making sure that one bell would not be pressed out until the other was lowered to the shoulder, which made it all the more difficult to execute. I weighed in at 153¼ pounds that evening purposely, and I may mention that it was the heaviest that I had ever been up to that time.

Now with these records to my credit, I thought I would “coast” along for a while and get back to the body-building exercises once again, which always gave me so much pleasure and delight. I may mention that there were other performers that evening, but suffice it to say that my pupil, Jack Long, Jr., who also weighed in at 153¼ pounds, created a record in the One Arm Curl, 72 ½ pounds with the right arm and 70 ¼ pounds with the left arm, and 149¾ pounds in the Two Arm Curl.

Another artist, Mr. Bert Wilder, whom I had met some time ago, asked me to pose for him, he wanting to make a statue of me in bronze. He decided that the pose he would like to model me in was the pose I took while doing my Two Arm Continental Press. This I agreed to, and posed for him several times each week. He insisted that I press a heavy weight during each posing period, so that he could catch the muscular tone and reality of actually pressing a heavy weight.

The year 1934 was now approaching, and one morning a very handsome, powerful young man visited me and made inquiries about training here at my gymnasium. He was destined to become one of the greatest physical specimens of modern times. Suffice it to say that he won the Mr. America contest in 1942. His name – Frank Leight! I am happy to say Frank has been training here at my gymnasium now for ten years and we have become not only training partners but very close friends.

In the year 1934 Mr. Carl Easton Williams asked me to prepare a series of articles about Sandow for Physical Culture magazine. This I did with great interest. The article was entitled “Sandow the Magnificent” and it ran for three installments. I obtained the Attila scrap book, consulted files in public libraries, and went to newspaper offices for old clippings. Books too were consulted, and I spent many days looking up facts in order to make the story interesting. It was a pleasure for me to do all this, not for the remuneration that was given to me, but because I considered it an honor and a privilege to write the life story of the man responsible for inspiring so many thousands, yes, millions of people to interest themselves in barbell and dumbell training. Many of my original photos of Sandow were used to illustrate the articles and also a photograph of the Sandow Statue that I now possessed. I also obtained another fine bronze statue of the magnificent Sandow.

This series of articles was followed by several others that I wrote for Physical Culture. One was on “The Art of Lifting Human Weight,” “Handbalancing Stunts,” “Feats of Strength” and several others that had to do with the “Sport of the Strong.” I had started a mail order course too, but this took up so much of my time away from the work that I really enjoyed, conducting the barbell gymnasium, that I decided to discontinue it and allow others, who I felt could devote the proper time and effort in this branch of the business, to do so.

One afternoon I received a phone call again from the artist, Mr. C. Bosseron Chambers, whom I have mentioned before, and for whom I posed when he painted “Strength Victorious.” He asked me if I was ready to accept his offer to paint a large portrait. This I naturally agreed upon, and an appointment was made with Mr. Chambers to have some photos taken in various poses so that we could select the pose which would be later selected for the portrait. I believe about 24 pictures were taken, and then the elimination started. Finally, two were selected. Mr. Chambers asked me which one I liked the best, and as I did not want to select a pose which he did not like the best, I asked him to make the final choice. This he did not wish to do, for he informed me that since I was to be presented with the painting it would be no more that fair that I select the pose. After a bit of a discussion, I finally selected the pose that I liked best. When I did so, Mr. Chambers’ face beamed with delight. He too liked my choice for the best, and it was not long after that the painting was finally finished and we had the unveiling in his beautiful Carnegie Hall studio. We invited Bernarr MacFadden, Charles Atlas, Tony Sansone, Sam Olmstead, Elmore Cole, and a few friends of Mr. Chambers. It was thrilling to see this beautiful painting, three-quarters life size, unveiled. much favorable comment was passed by all present, and both Mr. Chambers and myself were congratulated, he for his magnificent artistry, and I for being so fortunate in having posed for such a distinguished artist and being presented with such a masterpiece. I may mention that Mr. Chambers is considered one of the greatest religious painters of the present age.