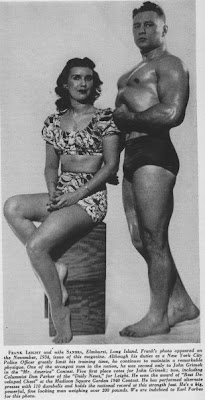 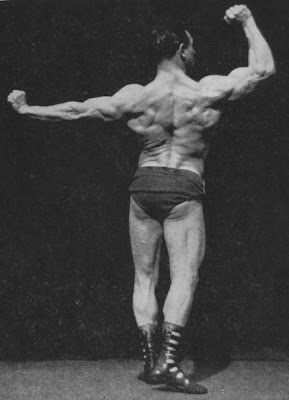 A synopsis of what happened last chapter:

Sig received a phone call from a woman who requested his appearance as a “strong man” on the “Go Get It” radio program over WOR. Since the lady had never seen Sig, as a practical joke Frank Leight was introduced as Sigmund Klein. However, at the last moment and to the bewilderment of everyone present, Sig appeared on the radio stage ready to proceed with an impromptu strong man act. Continue the story from here.

When I made my appearance on the stage clad in my lifting costume there was considerable excitement and many faces looked askance to Frank Leight who, laughing to himself, had taken a seat quietly in the rear.

First, I was asked several questions by the announcer for “Kruger’s Beer.” Then I bent a spike. This was followed by hand balancing and finally I lifted the announcer overhead in the Two Arm Press, while he kept talking to the radio audience telling them what I was doing. I judged he weighed about 175 pounds. I think my act merited first prize for the lady, except that the judges gave the first prize to the couple that were married fifty years. We had lots of fun that evening. No one was more surprised than our lady friend, who kept telling me she would never in a million years believe that I was the individual that would give that exhibition and not Frank Leight. As for Frank, he enjoyed this little incident about as much as anything he had ever heard of, and laughed about it for weeks afterward.

In looking over the various articles that I have just written, I believe many readers have been wondering about my training at the present time (1945). Three workouts per week are still practiced by me regularly, and often on a Saturday I do specials. Occasionally I practice a little lifting, showing partially to the Military Presses. I change my training program from time to time, something I have always done so that the muscles will obtain the proper amount of work from various angles. At the present time my program, which I have now been following for the past year, is as follows:

This is about the regular workout that I am practicing today, and it takes about one and a half hours.

I train usually on Monday, Wednesday, Friday, and if I do any exercising on Saturday I usually include Roman Column exercises, besides several others that I do not practice on my regular training days. How long I will adhere to this program I do not know at this writing. I have found that it suits me very well, and have actually improved in musculature in the past couple of years, and since I have shown satisfactory improvement with this, I may just as well continue on it until such a time when I feel I should change again.

My measurements have stayed practically the same for the past fifteen years or so. I must make a confession here. When I first mailed in my photographs to the Milo Barbell Company, I informed them that my height was five feet five inches, feeling always that by the time the pictures would be published I would certainly be of that height. Actually my height is five feet four and one-half inches, and so when one asks me my height I usually ask if they want my official or unofficial height, and hasten to tell my official height as 5-5 and unofficial as 5-4½. I am the shortest male member of our immediate family, and had always expected that I would be at least as tall as my oldest brother, whom I resemble both facially and in figure. He is 5-7½, another brother who is two years older than myself is 5-11, and my father was 5-7.

Our family was quite a large one. There were five girls and three boys. Like so many other large families, hardly two members had anything in common with each other as to hobbies, likes and dislikes. Outside of my father, no other member of the family was ever interested in great strength, though I believe that my oldest brother, had he the time or inspiration, would have made a good weight lifter. He had the proper frame-work for weightlifting, having inherited from our father quite large bones, whereas my bone structure was, as my measurements will show, quite small. I was a smaller edition of him. My measurements follow:

It seems as though this brings us to the year 1942, just three years ago. In reviewing this briefly, I wish to say that I do not know of any work or profession that I would have preferred doing or that would have given me the pleasure, the satisfaction and the great number of friends. The hundreds of people whom I have helped to improve physically, so that they too can enjoy the better things in life to the utmost, have been a great source of satisfaction to me. And now I wish to thank Mr. Bob Hoffman personally and the entire York Bar Bell Company staff for their splendid cooperation and interest in making these articles possible. If the reader will get a little pleasure and encouragement from them I feel that all my efforts in preparing this series will not have been in vain. It is eight o’clock again and my last pupil has just bade me “good-night.” I have returned my scrap books to their proper resting place, and since I intend to continue in this profession for a good many years, I have already started another scrap book which will be consulted when I write my series on “A Half Century in the Iron Game.”