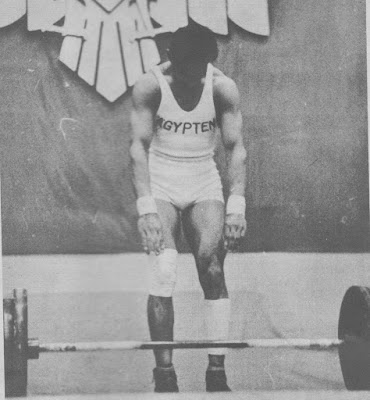 Although the lightweight Olympic lifter Ibrahim Shams of Alexandria, Egypt, belongs in the past, lifting records are being eclipsed constantly and has been pushed back into 3rd place as a weightlifting nation, in many respects this 140-142 pound lifting specialist is still very unique.

His claim on our attention is immediately established when we realize that the clean and jerk of 338 ¼ established on the 9th of May, 1939 at 142 pounds bodyweight ahs withstood the onslaughts of all comers for 16 ½ years. Even the , who are particularly powerful in lightweight talent has, up to the time of this writing, failed to claim it for the “hammer and sickle.”

Shams, like his compatriot El Touni, was one of the earliest Greats of modern lifting. Touni, the 5’6” middleweight was thewed like the Farnese Hercules, but Shams at 5’9” weighed 25 pounds less, being the lean Thoracic-type built on greyhound lines.

They came to fame around the same time and often lifted on the same international platform, but were the very antithesis of each other as far as personality and lifting styles were concerned. Touni’s great muscles enabled him to put up a good lift at almost any hour of the day or night without undue mental preparation. Shams, on the other hand, possessed great stores of dynamic nervous energy and he learned to use and develop the “invisible latent aid” to a phenomenal degree as his weightlifting career unfolded. All world records, however remarkable, must eventually be broken, but when a clean and jerk stands for nearly twenty years in an age of terrific competition there must be something fabulous and uncanny about it. When I first heard of this lift I remember wondering, “If 338 pounds can be clean and jerked at 142 pounds – what equivalent poundage can be elevated at 148 pounds bodyweight?” The answer, according to the “Formula” is 349 pounds.

It was obvious that this youthful Egyptian lifter was miles ahead of anyone else in formula-bodily-lifting-efficiency at that time and I came to regard him as Ibrahim Shams – The Miracle Man.

I first came into personal contact with the Miracle Man in in 1936 when he was a handsome olive-skinned, raven-haired youth of 18-19 years. He managed to gain third place in the featherweight division with lifts of 176, 209, and 275 pounds for a 661 total.

He blossomed rapidly, and under the coaching of Aziz Talaat of made rapid progress, until in 1938 in , though weighing only 140 pounds, he was able to tackle a 248 snatch with his second lift and make terrific cleans with 308, 319, and 325 pounds. That was the year John Terry, Tony Terlazzo, Johnny Terpak, John Davis and Steve Stanko represented the . Shams failed with all of his jerks, but he waged such a terrific battle right up to the last lift that the Austrian audience went nearly mad with excitement.

He was only 21 years old when, a year later, he made further records. And round about the time Terlazzo was also doing things. Within a few weeks the clean and jerk record changed hands about four times. First it was Terlazzo, then Shams, then the American, until finally, during the Egyptian Nationals Shams excelled himself to notch 220, 258, 338 and an 816 total.

To what dizzy heights would these two have risen if the Second World War had not intervened it is impossible to estimate. But I have correspondence from Trainer Talaat in my possession which is both illuminating and fantastic. Here is a brief extract.

“Shams is a lightweight Rigoulot and is in such a degree of ability, which if I said, many would not believe. The form of our weightlifters is in the Camp of the Caesars is most astonishing and enjoyable. I would like to demonstrate by my pupil Shams, who, I am sure, by his new lifts will create a new ‘theory’ of weightlifting in relation to bodyweight.”

The Miracle Man did not make another international appearance until 1946 at , by which time he was beginning to lose the fresh bloom of manhood’s prime. His hair was thinning rapidly and his bodyweight was so low that it was decided to enter him as a featherweight – a ghastly error of judgment. Being a Moslem at that time he had accumulated more than one wife and was the father of five sons.

Emaciated and weak, he could only lift 176, 220, 275. The press represented a commencing weight, the snatch was a second attempt lift, and the clean and jerk was also a first attempt poundage. He cleaned 292, but failed with the jerk.

Yet, a few days afterwards in he cleaned 330 pounds during a demonstration. To the “expert” these things speak a language of their own. When he came to two years later for the 1948 Olympics, he managed to weigh-in at 144 ½ pounds – his heaviest ever. By that time he had achieved seven sons and taken one more wife. Gone was his blue-black hair and his margin of supremacy over the world’s lightweights. He had to fight very hard to contain Attia Hamouda, a well-developed lightweight. In spite of his very full lift and 12 years of heavy weight training it was a great occasion for Ibrahim Shams. He gained his first world title in with lifts of 214, 253, and 325 for a 793 total. There was a wonderful aura of athletic magic present during the final moments of each lift. Jim Halliday of came in third. Attia Hamouda, in wonderfully determined form making the same total as Shams and only losing premier position because of his heavier bodyweight. Attia pressed 231, snatched 242, and clean and jerked 319. a great crisis point was reached when Shams cleaned 319, but failed to jerk it. With everything at stake he increased the poundage to 325 pounds and my making one of the typical “supreme efforts” that were characteristic of his weightlifting career, succeeded. The lift took some time to complete, for he was in a highly geared nervous condition and trying to drag the last dregs of strength and energy out of himself. He was a remarkable athlete and his lean physique gave little indication of outstanding power. And yet, on the two fast lifts he was in a class by himself when bodyweight considerations are taken into account.

His speed in lifting was considered phenomenal. It was impossible to follow his movements. Once the weight left the ground, with a shout to Allah, it was at arm’s length overhead. Realizing that he was at a disadvantage on the press, he did his utmost to negate this defect by rising to super-human heights on the quick lifts. It seemed at times as though he had the power to induce a state of self-hypnosis when facing a crisis-point on great occasions.

It was at the following year (1949) that I got to know more about Shams’ “best unofficial performance.” During an interview which took place one evening I learned that his best ever press stood at 231, his best snatch was 264, and that his peak unofficial clean and jerk stood at 352. These were the lifts alluded to by Aziz Talaat years before in a letter to me. They were not made on the same day, but it is interesting to note that they add up to 848.

The lightweight crown was taken cheaply at with 776 being sufficient to keep the title in Shams’ name. He did lifts of 214, 248, and 314. It was rumored that he “broke training” before the contest so any chance of a big come-back had to be forgotten. I spoke to El Saied Nosseir in an effort to get more background about this lifter. His closing remark I shall always remember. He said, “Shams is a very remarkable lifter. He can lift very big weights when in the right mood.” And he added as an afterthought, “But when he is training for a big event I like to have him staying in the same house with me and it is much safer if I lock his bedroom door from the outside late at night.”

The following year Attia Hamouda was on the team instead of Shams and Joe Pitman of the ran out the winner by five pounds with an official 777 total. Shams reappeared once more at in 1951 (then about 34 years old and heavily balding) and with only five successful lifts totaled 754 which was sufficient to beat the opposition. He was much amused at winning a world title with such a low aggregate and the prize presented later afterwards at the banquet turned out to be a pair of silver-backed brushes which made the Egyptian party roar with laughter.

Let these things be the measure of his greatness as a lifter, just as his seven sons set the seal to his vital power. And if one of these lads should perchance turn out to be another Miracle Man – can be sure of being very well served.