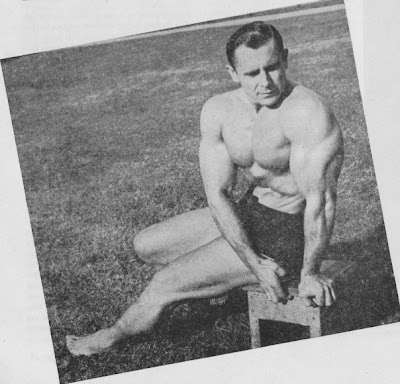 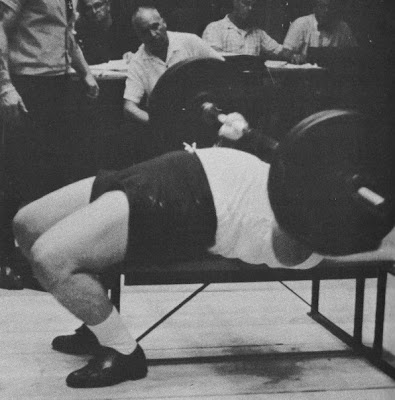 Steve Stanko – one of the world’s strongest and best built men of all time – is also one of the unluckiest. Just approaching his prime as a weightlifter in 1940-41, his great lifting career was cut short by a phlebitis condition in his legs which forced him to stop handling heavy weights. Now only 34, it is impossible to conjecture what weights he might have been handling; maybe 340, 340, 420? Who can say?

Before his legs started troubling him, Steve went through the following workout at the gym:

His bodyweight was approximately 225 at his height of five feet, eleven inches.

Impossible to make such lifts in training? Steve actually went through this workout one day when, as he says, he was “feeling pretty good.” Of course, the reader must realize that this was just one training period with training lifts that totaled 1,035. After this time, Steve’s legs went bad and he never again reached such heights. It is just unfortunate that no contest were scheduled when he reached this point. Most lifters top their training bests by 10-20 pounds in contest, especially in the quick lifts.

Steve’s “average” training routine was a little less startling, but still so tremendous as to be impossible for anyone but a real superman. Here it is:

Clean and Jerk
370 for several singles

He trained in a sweat suit and warmed up with some light calisthenics before starting to press. This gives an idea why this system couldn’t be adopted by many men – if any. Steve felt that it didn’t take any great amount of energy to do five sets of five snatches with 260! In one workout, Steve recalls making ten single clean and jerks with 380. The first two or three cleans were followed by two jerks from the shoulders.

He occasionally practiced the rowing exercise with 300 pounds for sets of five reps. Other special exercises were quarter squats with 400 pounds held in the clean position, sets of 10, and he would at times continental 410 or 420 to the chest just to “get the feel of the weight.”

At this time Steve could also work up to 620 in the deadlift and made a perfect curl with 205. Despite his heavy body and legs, he could perform one-arm chins.

Then tragedy struck American weightlifting. Steve became an invalid and dropped in bodyweight to 178 pounds, unable to perform heavy snatches or cleans ever again.

But you can’t keep a good man down! Two years later, although he still had to walk with the aid of crutches, Steve began practicing light dumbbell exercises lying on a bench. The movements he used at first were lateral raises at different angles, pullovers and dislocates, bringing the weights from the thighs sideward to a position behind his head while lying on the bench.

In five weeks time the powerful muscles developed by lifting the heaviest of weights rebounded to near their former size and Steve gained in weight from 178 to 203. As his strength increased, he began practicing heavier exercises seated or lying down. Heavier exercises included the pullover and press on bench (16 inches high) in which he worked up to 322 pounds – never attempting to press more than he could pull over with bent arms. His bodybuilding routine often included 4 sets of 20 bench presses with 205.

Steve also did a lot of dumbbell curling and pressing while seated. He curled sets of 20 (that’s right – 20!) with 50-60 pound weights in each hand and used the same weights and reps while pressing. He also continued the straight-arm movements. At that time Steve never did standing exercises, but once – at the request of a training partner – tried a standing curl. He made 190 in perfect style.

Steve’s titles as a physique contestant bear witness to the success of his comeback. he won the titles of Mr. 1944, Jr. Mr. the same year and Mr. Universe 1947, to name the most important. Never a “mirror athlete,” Steve still wishes he could get back into lifting form. If only his legs would let him! “If I could lift,” he says, “I’d practice lots of snatches. Man! There’s an exercise!”

Before trying to adapt Steve’s program to his own poundages, the reader should be warned that few people could follow it. In training, an individual must be guided by his own strength and recuperative power.

“Plenty of reps, with heavy weights – that’s my system,” says Steve, “and I recommend a mixture of bodybuilding exercises with lifting. The bodybuilder who practices the lifts will never have difficulty showing that his muscles are strong as well as strong-looking.”