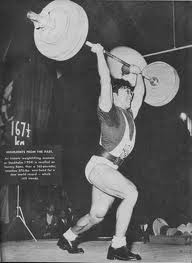 To the victor go the spoils, and to the man who makes the highest clean and jerk goes all the acclamation, the plaudits, the admiration – all the expressions of approbation. The press is a good way, if not a completely accurate method, of measuring a man’s strength. The snatch accounts for his agility and athletic talents. But the clean and jerk, to a degree, is a combination of both.

After many world’s championships several of the competing teams make tours of European countries. It was during one of these tours that the American team was giving an exhibition/contest against the German lifters. We were in and Pete George elected to attempt a 353 clean and jerk for his last try. He missed two attempts and then decided on the continental and jerk to make a success. He made it and the reaction of the audience was unbelievable. They stamped their feet, cheered and whistled, and acclaimed him the greatest man of the hour. At the Pan American Games in he again made a heavy clean and jerk of, I believe, the same poundage. Words fail me to tell how Pete was received by these people. Despite the fact that, in some countries outside of the continental United States, it is considered in bad taste to whistle at someone on a stage, these people voiced their approval of his tremendous effort in uninhibited fashion. The show was held up for no less than eight minutes while the audience did everything short of wreck the building to show their enthusiasm.

How did Pete, as well as the other lifters, acquire the technique and strength to perform these terrific lifts? Approaching contest time, all lifters train pretty much the same way on this lift. That is, they train on extremely heavy single attempts. Among the squatters, however, I’ve noticed repetition cleans are not common practice even during preliminary training. This is probably due to the fact that it is very difficult to maintain balance through several tries with this style. I have noticed, over the years, that squatters perform quite a number of heavy cleans in repetitions of twos and threes. My own method of training goes like this:

In addition, I do 3 sets of 5 squats with 450 and 5 sets of 3 bench presses with 340. This routine is part of my Monday, Tuesday, Wednesday and Friday workouts.

This workout has been planned so as to get the most strength with the least amount of time. I always workout by the clock. I do a lift or exercise every five minutes. In the case of the squat I take 15 minutes rest between attempts. Some lifters are inclined to sit around and waste too much time talking or joking with one another and, before they know it, it is time to close shop and go home.

About two or three weeks before a contest I change over my repetitions to single attempts. By so doing I can handle much heavier weights, thereby gaining additional strength. I also make the same practice on the squat and bench press as well. I discontinue the latter two lifts 7-10 days before a contest and take a complete rest from all lifts three of four days before contest time. Assuming I was to compete in a contest the last Saturday of the month, my workout would go something like this:

Same as press except that my limit poundage would be considerably less. Most likely I would use about 275 for six single attempts in the snatch.

I repeat the workout as outlined above on Monday, Tuesday, Wednesday and Friday. During the latter part of the third week I discontinue the two power exercises, the bench press, and the squat. I take my last workout on Tuesday or Wednesday of the last week.

Many inquiries have been made regarding my limit training poundages. People ask what is the most I have cleaned and jerked in training, and the same question about my snatch and press. I make it a point never to try myself out in training and when I tell people that my best practice clean and jerk is 370, my best snatch 280, they are quite surprised. I explain that these lifts, well below my best in contests, are because my individual temperament will not allow me to get into a competitive mood in practice. I believe the release of nervous energy and explosive power is an involuntary mechanism and is only active under certain competitive conditions. This is demonstrated, to some extent, by men who find it impossible to train alone; they find it necessary to have someone present to watch them train.

Should these individuals train alone, they find it impossible to lift heavy weights and, in some cases, talk themselves out of training altogether. For this reason I never try myself out during training and try to do my best during contests. But for those who cannot stand the suspense and want to know how they are doing, I would suggest the following: Try yourself once a month. Get a good rest the night before and warm yourself up thoroughly. Proceed along the lines of a contest and make only three attempts in each lift. Only make a fourth attempt when trying to break a personal record. I have never been in favor of weekly tryouts because I do not feel that the human body can bring itself to a productive peak this often. Also, the individual is inclined to think the system of training he is following is no good because he cannot break a personal record or equal his best each week.

If a man’s training mates are judging his lifting, they should tell him when a lift is bad. Don’t tell the man who is trying himself out, “Oh, that wasn’t too bad,” or “So-and-So got a lift passed that looked like that.” ‘Passing’ bad lifts in training may give a lifter a wrong impression of what he can do and result in his starting too high and possibly cause three misses.

If you are the type of lifter who finds it difficult to make weight for a contest, here are a few suggestions: Do not attempt to make weight over long periods of time. That is, don’t start to reduce a month before competition. Do not starve yourself, especially if you are only six or seven pounds over the limit. Chances are you can take off this much weight in five days by simply cutting down your liquid intake. Leave running and steam baths to the prize fighters and resort to them only as a last ditch attempt. If you are 10 to 15 pounds over the weight limit, it is better that you condition yourself for the next higher weight category.

Usually, weigh-in time is one hour before the start of competition. Should you find that you are a pound of a fraction of a pound over the limit at that time, do not worry about it. Chew gum and discard the saliva, and remain in the men’s room to relieve yourself of as much waste matter as possible. Vigorous and prolonged rubbing of the buttocks will also take off a few ounces. Certain topnotch lifters have been known to use strong cathartics in order to reduce. While this is done, large quantities of watery evacuations are discarded; since two-thirds of the human body is water, bodyweight can be controlled – to a degree – by retention of removal of this liquid. It is not, however, a healthful or natural practice to control one’s weight in this manner.

The training methods in this article are not meant to be cure-alls for sluggish lifting. Nor are we saying that because these methods work for John Davis they will necessarily work for everyone else. These are, however, tried and proven approaches and will (with adjustments to suit the individual) work very well in many instances.