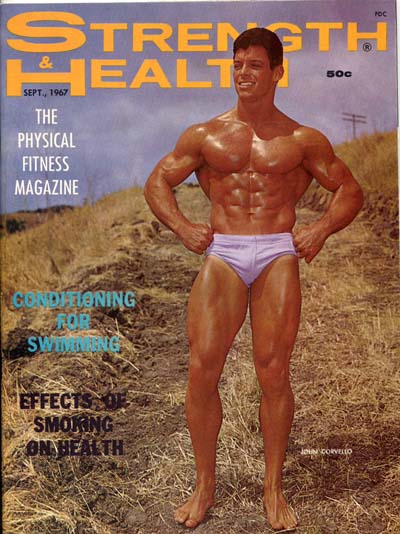 Originally Published in This Issue (September 1967) 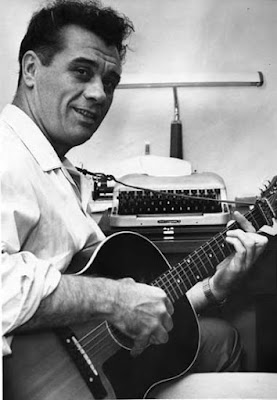 
I was practicing my guitar the other day when my daughter's boyfriend came in. He had on a shirt like a painter's nightmare and a banana sticking out of the breast pocket. He pulled out the banana and held it up to his mouth.

I gritted my teeth and fumbled four bars of "Wayfaring Stranger."

He made a big production of walking up and examining the guitar.

He flopped on the couch and put his feet up on the coffee table.

"That's right," I said. "Like for folk songs and get your feet off the coffee table."

He put his feet down, sat up straight, and worked an aesthetic look onto his face. "Man," he said. "That folk gig is for real. You know - cane fields, coal mines, exploitation of the working class and all." He gazed off dreamily into space.

"Marvin," I said, "what are you babbling about? You've never done a day's work in your life."

He looked insulted. "Man," he said, "I'm sensitive. I can appreciate hard work without actually doing any."

"How you doing with them?"

"Great." He got to his feet and stuck out his chest.

I shielded my eyes. "Marvin," I said, "do you mind sitting down? That shirt's going to blind someone."

"I wanted to talk to you about specializing," he said.

"Marvin," I said, "why don't you go read a good book and specialize on your head for a while?"

It bounced right off. "I'd rather have broad shoulders," he said.

"Marvin," I said, "are you thinking of my little girl?"

"Not really," I said. "But I remember how it was." I went into the kitchen and got a pencil and paper.

"Here," I said. "I'll give you a shoulder specialization program. Write it down or you'll forget it before you get home."

I sat down again. "You'll work out six days a week," I said. "Three days on a general bulk program, and three days on your shoulders."

"On Mondays, Wednesdays, and Fridays you do the general program. Start out with three sets of prone hyperextensions to warm up your lower back. 10 reps each set."

He scribbled on the paper.

"Now you can slip into the squats," I said. "Five sets of five reps. A light set to warm up, a little heavier for the second set, then three sets as heavy as you can do them."

He wrote it down.

"Do a set of pullovers after each set of squats. 15 reps with a light weight."

I looked at him closely. "You're working hard on the squats, aren't you?"

"Of course," He looked quite indignant.

"How much you using?"

"Around four hundred," he said. "For five reps."

I watched him for a while. "What do you mean, around four hundred?"

He shrugged. "You know. Around."

"For goodness sake, Marvin," I said. "Will you quit playing the fool? Exactly how much are you using?"

"Three-ten?" I said. "You were using that months ago. What have you been doing since?"

"It's not enough. You know better than that. Get with it."

"All right. Now," I said. "You can do your bench presses. Five sets of five."

"What about the shoulder work?" he said.

"That's coming," I said. "You work your shoulders on Tuesdays, Thursdays, and Saturdays. You'll use the 'High Set' system of training. Coupled with the power stuff on the other days, your shoulders should grow real fast."

"Write it down," I said. "You start off with the basic exercise for the shoulder girdle, the press behind neck. Only you won't be doing it in basic style. You'll be doing in in very advanced style. You gotta use advanced methods to really get good.

"Take the weight off the squat rack," I said. "Don't clean it. Use a wide grip and press the weight up as fast and smooth as you can. Lock your arms at the top.

"Don't rest the bar on your shoulders between reps. Just lower it till it touches the back of your neck and then press it right back up again. Try and get a sort of rebound out of it."

He got a dreamy look in his eyes. "Man," he murmured. "I'm gonna look great."

"Use a moderate weight for your first set. Do six reps. Increase the weight and do another set of six. Then do three sets of six as heavy as you can with a couple of minutes rest between sets.

"And don't forget," I said. "This heavy stuff is all-important. Reg Park presses over three hundred behind the neck. You won't get shoulders like Reg Park's by pressing one hundred or even two hundred. Shoot for three hundred pounds."

"Okay. And when you finish the heavy sets take a couple of minutes rest. Then drop the poundage way down and start doing sets of eight reps with no more than thirty seconds rest between sets. Do ten of these light sets and drop the poundage as you tire. You'll finish up with a pretty light weight but you'll be pumped like you're wearing shoulder pads."

Marvin looked a little doubtful. "Man," he said. "It might be easier to wear shoulder pads."

"Good. Now, when you finish the presses, take a short rest. Then you do a secondary set for the deltoids. The one-arm dumbbell press.

"Do them the same way, I said. "A couple of warmup sets, three sets of six as heavy as you can, and ten sets of eight with about thirty seconds rest between sets. Do them military style. Don't rock over any more than an inch or two.

"Handle all the weight you can on the heavy sets," I said. "You ought to be able to work up to over a hundred pounds."

Okay. And finally you do a supplementary pumping exercise. Lateral raises with light dumbbells. Do them fifteen sets of eight reps."

He scratched it down. The paper was getting crowded.

"Do the lateral raises in very strict style," I said. "Lean forward slightly while you're doing them. Don't lean back under any circumstances. Do them nice and smooth and no more than thirty seconds rest between sets. That's the final exercise and you'll be blown up like a life raft when you finish."

"And I'll get big shoulders?"

"I guarantee it. Stick on that program for a couple of months and your shoulders will be your outstanding body part. Everybody'll notice them."

I gave him a cold look and he stammered, "Not that it matters, of course."

"Okay," I said. "But don't forget you gotta soak up protein or you won't gain. Take all the supplements you can and knock off at least two quarts of the 'Get Big' drink.