This Article Courtesy of Liam Tweed 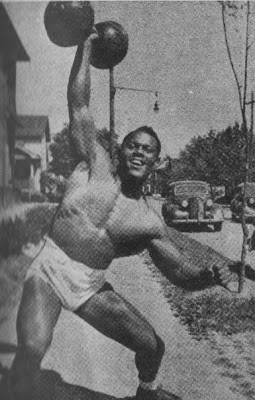 - John Davis was one of the greatest lifters ever produced by America and probably ruled the world heavyweight class longer  than any other man, having won the world title at least seven times and the heavyweight title 12 or 14 times, starting his record making career in 1938 and continuing until 1950 when he was injured while lifting and then retired.

He was one of the early lifters to make a 1,000 lb. total and made a top total of 1063.25 - perhaps not so high by today's standards, but the greatest in those days. He usually weighed about 210 to 240 and was not a big man by present day heavyweights.

The comments by Davis on increasing pressing power ought to therefore be worth considerable consideration. Even though this article was originally written some years ago, the way to greater power has not changed.

You may find some of his recommendations vary from what you will hear others advise. However, remember, this man became a world champion at 17 and was champion as long or longer than any other heavyweight. (Some of his titles were as a light-heavyweight.) We present the following comments of Davis, courtesy of The Australian Weightlifter . . .

Being a world champion is, of course, a pleasant experience, but it has its difficult moments, aside from close shaves in competition. What I'm getting at is this: Scores of fellows just starting out in the game (and many of those who have been active for a number of years) ask the same question -

I HAVE ALWAYS FELT THAT YOU MUST USE EXTREMELY HEAVY POUNDAGES TO MAKE SATISFACTORY GAINS, and that you cannot concern yourself with what kind of form you use in training.

To deal first of all with the Press. This is the lift that seems to give most of the lifters trouble. Provided you possess all of the natural attributes: leverage, proper mental attitude, etc., there is no reason why you shouldn't make favorable progress.

Possibly the only factor about my own training method that would not be suitable for many lifters is the following:

I train on each lift for a week; i.e., I train four days a week and I spend the four days training on the Press. The second week I work on the Snatch, and the third week on the Clean. Sometimes I double up, working on two lifts for a week. In addition to the lifting movements I include a power building exercise such as the squat.

Depending on what kind of condition I'm in at the beginning of a training schedule of about 10 weeks, I make up my mind from the very beginning that I will not go below this poundage for any reason whatsoever. I will do no less than 8 series (sets) of presses, regardless of how sloppy my form may become.

Here I must caution everyone on an extremely important point. As in singing, you must exercise terrific control in lifting. You must control bad lifting to the point where it no longer can run away with you. If you do incorrect presses in training, you must control them so that you won't do them in a contest.

Some may not agree with me on this point, but these are my opinions and this is the way I reached a lift in excess of 300 pounds. At some of my training sessions in England and Europe I dragged my head all over the platform trying to press 292 or 303.

These were presses that would not be passed in the most lenient of contests, but come contest time I could control that backbending to such a degree that I could almost always register three white lights from the judges.

To get back to the pressing itself. The principal idea of weightlifting is to build bigger and stronger men. This will not be accomplished if, on every training night you constantly drop back in your training poundages and repetitions. I'm referring, specifically, to the 5, 4, 3, 2, 1 system whereby you reduce the number of repetitions employed. Also the 1, 2, 3, 4, 5 system in which you reduce the poundage employed. These systems are contrary to basic principles and will not build sustaining power in the pressing muscles. In other words, they do not build "fight and guts" - that something so necessary to get heavy weights through the sticking area without losing control. This has been my system for over a decade.

The essence of my idea is that if you continually go forward in training, it follows naturally that you will go ahead in a contest. I try to advance my training poundages every second by 2.5 to 10 lbs. If I don't feel that I can advance after this time I am not ashamed to work with the same poundage for another workout or until I can advance. The Press is one lift you cannot force. You just have to wait and take it as it comes.

What to do after having gotten the most out of this system seems to leave most lifters in a dither. Either they lack imagination or they don't sit down and think the problem out rationally. Although I've never known this system by any name, I suppose one might call it the "Set System" - a set number of repetitions and a set training poundage.

In the beginning of my lifting exploits (when 220 was my best Press), I used 175 as a training weight. I would do 10 sets of 5 reps. Eventually my muscles failed to respond to this particular training. Of course I had to find some other system.

By this time I was becoming known and had become an active member of the second team of the world famous York Barbell Club. I noticed that men such as Terlazzo, Terpak, and others, employed basically the same system as I did, except that they did fewer repetitions than I. Bob Hoffman recognized my difficulty and suggested that I try Tony's and John's (Terlazzo and Terpak) system of training on the Press. I cut my repetitions down to 3 and continued to do 10 sets, using 210 lbs. My Press responded immediately. When I first went to York, my Press stood at 250 lbs. At this time I had been chosen to represent the USA at the 1938 World Championships to be held in Austria. In the summer of 1939, exactly two years and seven months since I began lifting, and during a workout, weighing 183 lbs., I pressed 295 lbs. I used the above described system until I was able to Press 290.

At this time I ran into another snag and couldn't get ahead in my Press. This time I used my own imagination and starting using sets of 2 reps (10 sets) and sometimes using sets of 3 reps. I started using 200 lbs. and advanced this poundage whenever possible. I would always take a substantial poundage and make 10 single attempts (incidentally, I still do this). At that time, in June of 1941, I made 10 single attempts with 310 lbs. I was soon to find that I could make a fair Press with 320 lbs. I say "fair" because I had to press this weight twice at the 1941 Senior Nationals and although the judges passed it, it was not a perfect Press. I was lucky that day. By the way, I have lifted in front of the most critical judges in the world and if I ever got away with anything (and I certainly have) the blame lies with the officials, not with me. 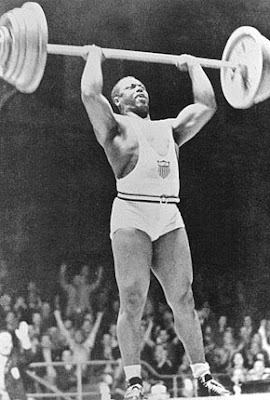 I lifting in competition the following year and once again in 1943 with my Press falling off considerably. I then spent nearly four years in the Armed Forces, with little or no training at all. In 1946 I again started using the "set system" of pressing with fair results, but I didn't come along as expected, especially with the increased bodyweight to 240 lbs. (pre-war bodyweight 196-200 lbs.) I could only Press 290 with great difficulty (it would never have been passed).

So once again I changed my training system. I started using 290 lbs. in 10 sets of 2 reps and went directly ahead until I could Press 325 lbs. Here again my progress stalled. I changed my routine to 8 sets of 2 reps, using 280 lbs. which has worked better than any previous method I have ever used.

I have experimented with other systems and have found them to be excellent, but I do not care to use them at this time. I am, more or less, saving them for a rainy day, so to speak.

There is no secret to training on the Press - or any other lift, for that matter. It merely requires a little patience a little imagination, and a good deal of sweat (above all else) with as heavy a weight as you can handle.

There are lifters who claim that all kinds of pressing - supine pressing, alternate pressing, handstand pressing, etc., will build up your pressing ability. I don't believe this. I feel that the energy expended in dumbbell pressing and so on could have been put to much better use in regular presses.

To break the monotony the best alternate movement I can think of is the press while seated. This exercise builds tremendous power at the sticking point and plenty of finishing drive. It also helps to improve the form in regular pressing because there is very little cheating you can do while seated.

Never think that you can Press 200 pounds on your first attempt, but be as sure of it as you are that there is a sky over your head. Because if you miss out on that first Press, chances are that you have missed out on first place in the contest.