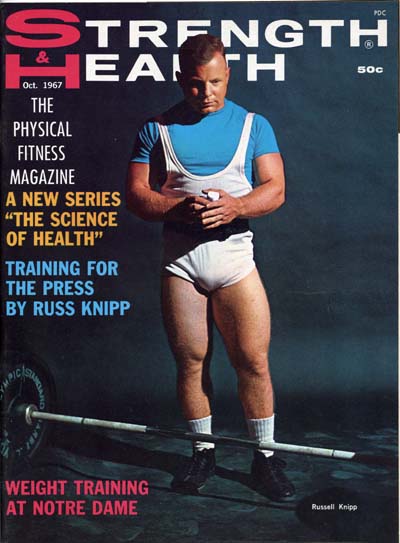 Originally Published in This Issue (October 1967)

So far in this series, the emphasis has been on building bulk and power. If you've followed the series from the beginning, you'll have developed by now a fair degree of size and strength. You'll also have a good grounding in the fundamentals of building a truly herculean body.

Note: this is the 29th monthly installment in the series. So, if a lifter had been following it as directed, two years and four months would have passed since beginning.

We're still going to concentrate on bulk and power, but there'll be a drastic difference from now on. We're going to bring in some other factors we haven't mentioned yet, but which are indispensable in producing a perfectly trained and proportioned physique.

Most of you will be ready not for a big advancement in your workout routines and a radical change in your training habits. You'd be wise, even if you haven't been following the series, to give a lot of thought to what's coming.

We're going to talk about three items. These items are closely related to each other and to your ultimate success in bodybuilding. Properly considered and attended to, they'll add fantastically to your appearance and to your training progress. Two of the three items are seldom, if ever, considered by weight trainees, and the third item is badly misunderstood.

Let's take them one at a time. We'll start with your health.

If you take a look at the cover of this magazine, you'll see that it refers to two factors of physical excellence - "Strength" and "Health." That last word isn't just tacked on to use up space. The editors of this magazine have been in the business a long time. They consider health important. So should you.

Most trainees think about their strength. Some of them think about nothing else. But very, very few give any consideration to their health. You can take my word for it that time spent on improving your health is time well spent. Good health is your biggest single asset. It's got money backed right off the map. It's infinitely more important than strength in the long run.

Good health is a relative term. It means different things to different people.

To the average guy on the street, good health means four colds a year and the flu every winter. It means a major illness once in five years and a major operation once in ten. It means two hours of misery in the dentist's chair every six months or so. It means pills so his head won't ache. It means pills to make him sleep and pills to keep him awake. It means an upset gut when he eats anything stronger than breaded veal cutlets and frazzled nerves when Billy leaves his bike in the driveway. It means giving up his teeth at thirty, his hair at forty, and the ghost at fifty.

It means, in short, a condition more to be endured than enjoyed. Good health to the average man isn't really all that good. It's nothing like the kind of health he could have with a little intelligent exercise.

Good health, in the sense I'm talking about, means something much better. It means an abundance of energy during your waking hours, and deep, untroubled sleep at night. It means the complete absence of all disease, including minor colds and headaches. It means teeth like concrete blocks and never seeing the inside of a hospital except to visit sick friends. It means nerves like a wooden Indian and the digestion of a sword swallower.

It means, in short, a very desirable state of being.

You can acquire this type of health if you plan for it, eat for it, and train for it.

A healthy heart is the most important single factor in any consideration of your health. Heart disease is the big killer today. You could stock a small country with the premature victims of heart disease. If you're old enough to vote, you're certain to know someone who died of a heart attack. If you're old enough to vote sensibly, you're probably a good candidate for one yourself.

We're going to consider the heart very strongly in our discussion of good health.

Old rumors to the contrary, weight training won't make you sick, and it won't promote heart attacks. Unfortunately, unless you train properly, it won't do much to prevent them either. Haphazard training is better for your heart and your health than no training at all, but it's nowhere as good as training that's properly planned for that particular purpose.

The key is proper, as distinguished from improper, training. Proper training will give you the type of good health I mentioned earlier. Most important of all, it'll give you a heart as sound and lasting as a railway man's watch.

We'll get on to the subject of proper training for good health as soon as we touch lightly on the other two of the three items we mentioned earlier.

The second item we're going to talk about is your endurance.

Once you're into the semi-advanced stage, you should start giving some intelligent thought to your endurance if you're really serious about building up good health and a herculean body. Endurance, from the standpoint of a healthy body and particularly a healthy heart, is more important than just strength alone. Training for strength helps your heart and your health a little. Training for a high degree of endurance helps a lot. The sensible plan is to combine the two. There's no reason why you can't be strong and enduring as well.

Don't underestimate the importance of a reasonable degree of endurance. If you're all strength you're taking quite a gamble. If you can Press 300 puff from walking up the stairs into the gym, then you're in trouble and you'd better do something about it.

When I was just a kid, I watched a pretty good heavyweight lifter working out. He was doing presses in sets of two. He collapsed on the bench after every set and puffed for five minutes.

After four sets he dropped to singles. He didn't increase the weight, he just cut the reps in half. He did three more singles with at least five minutes after each one and then he missed his next Press.

He explained why and at least he was honest about it.

"No endurance," he said.

I asked him about it.

"I'm not worried about endurance," he said. "Just strength."

"You'd lift better with a little more endurance, though, wouldn't you?" I asked.

"I doubt it," he said. "Endurance is one thing, strength is another."

"What about your health, though?" I said. "Wouldn't you be healthier if you had some endurance?"

He got annoyed at me. "Listen," he said. "I'm healthy as a horse right now." He wiped sweat off his face and sat down again. "I never had a sick day in my life."

He got his sick day when he was thirty-eight years old.

He was hanging a picture for his wife. He dropped the picture and grabbed his chest. He grimaced, took two steps toward the bathroom, and fell over. The autopsy report said that he was probably dead when he hit the floor.

Quite apart from the health angle, endurance plays a big part in successful bodybuilding. It takes a high degree of endurance to work through the type of program you've got to follow to build a really outstanding body.

Most of today's top bodybuilders are pretty enduring. They have to be. Some of them do programs that would stagger the village blacksmith. They work fast. They go from one exercise to another with very little rest in between. They compress a tremendous amount of constructive effort into each workout. You'll appreciate the absolute necessity of endurance when you get into the real championship bodybuilding routines.

I workout out with one of the top bodybuilders in California a few years ago. I hadn't done any work on endurance. I'd been doing a lot of straight lifting but I wanted to get back into bodybuilding.

We started on his program, taking turn about on the sets. The only rest we took was when the other guy was exercising.

I didn't last too long. I outweighed him by forty pounds and was at least 10 percent stronger. He was better built though. I had the strength, he had the body. He also had the endurance.

A quarter of the way through the program I was puffing so hard I couldn't talk and my insides were doing flip-flops. Two more sets and I'd had it. I lurched into the washroom and threw up my lunch.

He came in and grinned at me. I was bathed in cold sweat and my gut felt like the Bolshoi Ballet had bounced across it. He wasn't even breathing hard.

I gave him a haggard look. "Great," I muttered. "This is really my idea of a fun thing."

"Gonna throw in the towel?"

"Throw in the towel?" I said. "I just threw up both kidneys and about eighteen feet of small intestine. I didn't see no towel."

He patted me on the shoulder. "Man," he said. "You ain't gonna make it with the muscle bit."

"Man," he said. "You're liable to drop dead next time. The fuzz could blame me."

I was too sick to argue with him.

"Do an easier program," he said.

I washed my face in cold water.

"Take it a little softer."

I agreed with him.

"You ain't got the endurance for it."

"Yeah," I said. "Like I already figured that."
"You gotta build up your endurance," he said. "Do it gradually if you have to, but build it up. You'll never get really advanced otherwise."
A top bodybuilder's physique takes a lot of exercise. You've got to keep the workout rolling right along to stimulate further gains. If you have to stop and rest for five minutes after every set you just won't get the stimulation. You'll lose all the advantages of the multiple set system.
There's another point in favor of endurance. That the time element. If you're doing an advanced program and you have to dawdle your way through it, then you're going to spend more time in the gym than the owner does. You'll also make a social outcast of yourself. Life's pretty short to spend all your time looking at a squat rack.

If you build up the necessary endurance, you can plow through a top line routine and do it fast enough to get the maximum amount out of it. You're also spared the embarrassment of having a friend sneak your welfare cheques into the gym.

We're running out of space. Carry on with your regular training, and next month we'll discuss definition. We'll also talk about how you can incorporate the principles of health, endurance, and definition into your advanced training routines for a greatly improved physique.

Note: Before you get all carried away thinking you're at the "advanced" level, check your poundages on the exercises, and remember . . .

This is the 29th monthly installment in the series. So, if a lifter had been following it as directed, two years and four months would have passed since beginning.