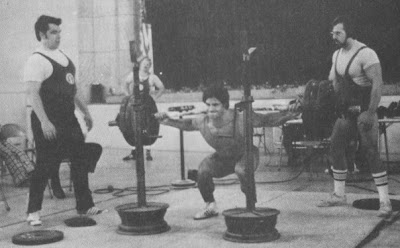 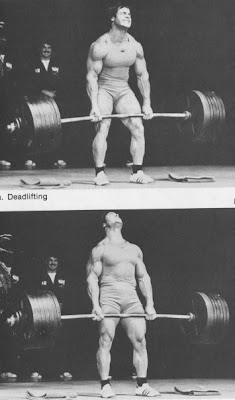 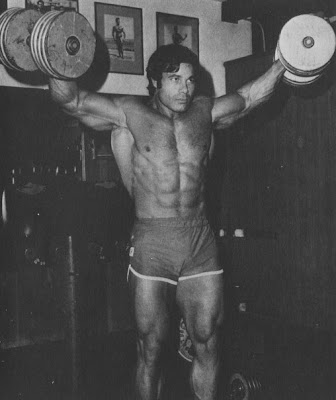 Winning Weightlifting and Powerlifting
by Franco Columbu and Dick Tyler

The death of Milo of Crotona was almost more spectacular than his life.

The tale goes that, while walking along in the woods, he happened upon a wedge that was hammered into a tree stump by a long-departed woodsman who had apparently felt that splitting the stump was too great a task. This presented with a challenge. So there, in the darkness of the forest, he tried to split the stump with his bare hands. As the wedge fell to the ground, the powerful Greek champion’s hands became caught in the crack in the stump. Unable to free himself, he was eventually devoured alive by the wild beasts of the darkness.

The drama associated with strength.

The knowledge to follow is worthless if you aren’t properly motivated. With most of us, enthusiasm is easy to come by. Unfortunately, it’s a fleeting thing that rarely lasts. This is particularly true when the enthusiasm concerns the expenditure of energy. How often I’ve seen someone read a strength magazine or see a physique or lifting competition and run immediately to the gym. After a few weeks of weight lifting, they look in the mirror, and if Mr. isn’t there, they quit. We all have incredible strength that can be triggered by an emergency and the consequent need to survive. If you are willing, you can develop the strength and physique you desire, if you stick with it.

It might be a tough road, but if the goal is important to you the rocks in your path will become like grains of sand.

-> When a tested muscle proves weak, pressure stimulus to specific points often brings a startling return of strength. The application of this can be invaluable in your training. If you know the anatomy of a muscle that tests weak, you can bring tone and power back to it by massaging its origin and insertions for ten to twenty seconds. While this may not always help, it is worth trying.

As you progress, you’ll find that the body might become stale to the movements that you use in your training program. You might reach a plateau that you just can’t seem to overcome. It’s almost like feeding a child the same thing every day. Finally it rebels – not just because of boredom, but also because the infant may inherently realize it needs something else in its diet. Babies have been found licking the walls of tenements to get needed nutrients. These are instinctual feelings that we tend to lose as we grow older and begin to rationalize the things we do. The body, however, doesn’t do this. It remains the same dynamic structure, speaking the same language. One of the biggest problems has always been to understand that language. With exercise the body speaks to you in loud and clear tones. At a certain point it physically stops responding to your desires to the degree that you want. That’s when it is time to change.

To continue your progress your program should be rearranged in such a manner that you can have a greater variety of moves, while, at the same time, you are increasing the poundages used. To be sure, this is not easy. It takes dedication and motivation – which you must have already or you wouldn’t be reading this. The question is how much dedication? The more, of course, the greater the results.

You may have noticed that the heading of this routine uses the word sample. Obviously this means that it is not the only program that can be used to get results. It is, however, one that I have used with great success. We are all different and respond to training accordingly, so experiment if you wish. One thing that needs no experimentation is motivation, the single ingredient no one can give you but you.

Remember, all the power in the world won’t help you without the desire to succeed. I don’t mean a casual desire, I mean a sacrificial one. Your watchword must be desire.

For greater all around body power, which I strongly believe in, it has been proven quite beneficial to combine weightlifting powerlifting programs.

SOME FINAL THOUGHTS
It seems that the most valuable and respected concepts are often labeled as secrets. This is nonsense. I think of secrets as nothing more than guarded ideas that are usually relinquished for a price. Everything I’ve written above I have either learned from others in the various gyms I have trained in over the years, or I have devised from my own thoughts to best fulfill my needs. I didn’t train in a closet. Others would share with me and I with them.

The important thing to remember is that any concept is subject to revision. What might benefit me might not have the same effect on you. Some things are basic, however. We know that a certain method of performance is required in competition; therefore, the best way to sharpen one’s actual skills in this requirement is to perform the actual lift according to its rules. It’s the training aids that should be developed to needs of the athlete. So in using the information above, you should consider it a friendly guide, not an infallible testament.

If I can leave you with nothing else, let me at least offer you these final words. If you are content to place second in challenges what you strive for, then it would take many volumes to encourage you to be better. To realize victory, however, all you need is motivated potential. It’s that simple.