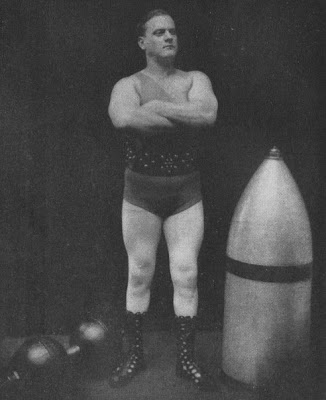 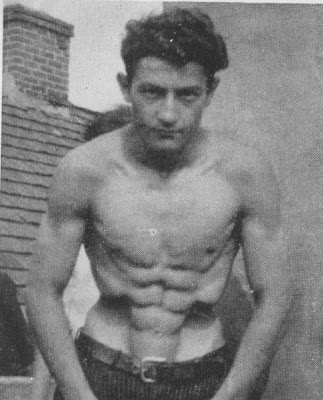 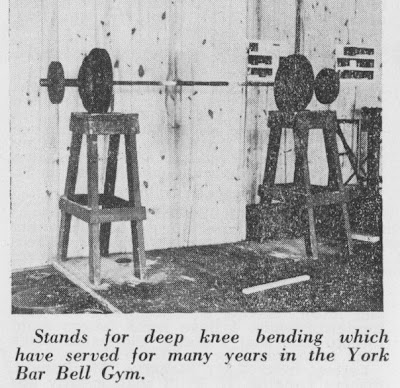 On Sunday morning, July 13, the Strong Man and weightlifting world lost another of its greats in the person of Warren Lincoln Travis.

Travis was on of the few remaining links between the old-timers and the present generation or weight lifters. For the past twenty-five years Travis has been a feature performer at The World’s Circus Side Show in , and all who visited this famous playground have at some time seen Warren Lincoln Travis.

Three times, to the best of my knowledge, Travis “retired” from the strongman business, but not for long . . . he could not resist the lifting of huge weights, and would tell me from time to time that “this is really my last year.”

In fact, back in 1925, at one of the shows that I had in , Travis gave an exhibition, on his fiftieth year, and said at the time that this was going to be his last big lifting exhibition. It is too bad that he did not keep his promise to himself, for with the type of constitution that W. L. Travis had he could nave been one of the greatest testimonials for longevity among weight lifters, and proven in his own that weight lifters can live to a ripe old age.

He was about the greatest admirer of Louis Cyr in the , and would go to a great deal of “trouble” getting more and more facts about the Canadian Giant.

I believe it was around 1897 that Travis first came to Professor Attila’s gymnasium. Here he met Lionel Strongfort and Horace Barre. Barre was at one time a stage partner of Louis Cyr’s. Attila at one time managed Cyr (in ). So one can see that Travis was in the proper environment for what he set out to follow in the strongman profession.

It was at Attila’s gymnasium that Travis first met Sam Austin, who was at that time the sporting editor of the National Police Gazette. Travis told me some time ago that Attila, who was a personal friend of Richard K. Fox, asked Mr. Austin to witness some of the lifting that Travis would do, and that Travis had championship ability and should get publicity. This was probably the beginning of W. L. Travis’s professional career. He would visit the Attila gymnasium regularly, consult with the professor about how Cyr would lift this weight and that, what would be best to do for various exhibitions, etc., and so he finally ventured forth as a back and harness lifter.

As much as he admired Louis Cyr, he never met him. He had many opportunities to travel abroad but preferred to stay in this country not of personal choice but owing to a promise he made to his mother years ago. She consented to his traveling in this country but she would not want to see him go to .

He won many trophies and was the proud possessor of the Richard K. Fox diamond-studded belt. This belt was to be presented to the winner of the Louis Cyr – Eugen Sandow match which Mr. Fox tried to promote but which never materialized. Mr. Fox presented this belt to Travis with the provision that if a worthy opponent comes along he, Travis, will have to defend the belt and title which he was now claiming, “The World’s ”

When Arthur Saxon came to this country to fill an engagement with the Ringling Brothers Circus, weight lifters in and around thought here was the athlete for Travis to meet in competition. For reasons never made clear to me, this match never materialized, although Travis trained for the match that was being talked about. He told me that he could never hope to equal Saxon in the bent press or on the foot-press, but he trained on these lifts nonetheless. Travis spoke to Saxon about the foot-press and I will tell you what transpired regarding this lift.

Travis asked Saxon if a contest was to be arranged and the “foot lift” was one of the tests, if he, Saxon, would agree to allow Travis to do his lift with the plank resting on two trestles and iron placed on this plank. Saxon, who had his two brothers trained and a group of men who were placed on this plank in perfect order by the brothers, agreed to allow Travis to do anything that he desired. Travis said that this was the way Saxon acted about most any lift. He was very fair and would agree to most any kind of arrangements for a contest as long as Saxon could get a contest. Travis had the greatest respect for Arthur Saxon and told me that in an “over head” weight lifting contest Saxon could beat him, but that Travis hoped to defeat Saxon on the back and harness and finger lifts.
Saxon could do a foot press with 3200 lbs. and Travis could do the style mentioned above 2700 lbs.

Space will not permit me to give you all the records that Travis made in his style of lifting, but when it comes to endurance harness lifting, I doubt if there is a living man today who could equal W. L. Travis.

He was again engaged to exhibit at , and the last show was about 12:30 a.m. Saturday. He made his last lift, as I understand, with a 1000 lb. cannon. He died on the platform. If I may say this, I think that Travis always wanted to finish his full life “In Harness.”

And maybe he will finally meet the man and athlete he admired so much, Louis Cyr.