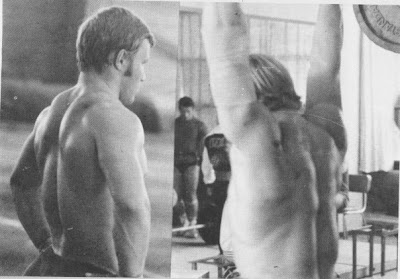 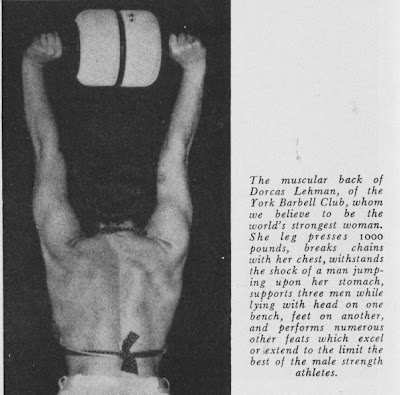 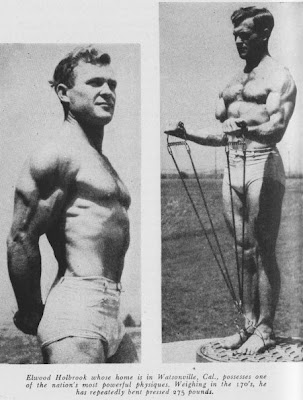 Weight Training Among the Ancient Greeks
by Pride

A few years ago our editor stated that the physiques of the Ancient Greeks were unequal to those of modern best-built men because the Greeks were the result of all-around training which could not equal specialized weight training. I do not wish to take him to task, because such is the accepted attitude which can be read about in most physical education text books. The argument runs something like this: Why engage in such monotonous toil as weight exercises when results just as good can be obtained from all-around athletics, and the Greeks are pointed out as being a result of such training.

In view of archeological discoveries such ideas are false. Inscriptions on monuments and pictures on old Greek vases prove that the Ancient Greeks practiced both progressive body building exercises and competitive lifting.

They had neither mail order courses not the modern lifting or exercise devices. The first gymnasiums were open air, more like playgrounds. Later on they became enclosures. Some were built and maintained by the city state for the use of all free citizens. Then there were the wrestling schools, which were in reality private gymnasiums where former champions made their living by training wealthy patrons.

When the buildings were demolished by wars or natural disasters the athletes carried away such parts as could be made into exercise equipment. For much the same reason modern lifters visit junk yards.

The most popular piece of equipment was the jumping halter which they held in their hands to assist them in jumping. Halters used only for jumping weighed four or five pounds, while those used for exercise were much heavier.

Some were simple in design, just cobblestones with handles cut in them. Others were highly decorative, shaped like flatirons or kettles. All the dumbell exercises known to modern exercisers were known to them. The halter was used individually or in groups, accompanied by flute music, much as modern calisthenics class exercises are performed to piano music. Another kind of exercise equipment was a flat marble slab with handles cut in the sides. They measured about an inch around the edges and were made by chiseling a large slab until the whole piece looked like a pyramid. This was a progressive device and could be used for supine pressure and movements similar to our bench press. Resistance was increased with the halter by increasing the size or using heavier material such as bronze, iron or lead. There were discuses for throwing and for exercise, of various size and weight, put in leather cases and hung on the walls of Greek gymnasiums.

Athletes’ legs were developed by racing in soft sand while wearing heavy armor, or jumping out of holes with the jumping halter. Resistance was increased by using heavy halters of digging the holes deeper, but the favorite method used by the Greeks to develop their legs was pushing heavy stone rollers over soft sand. They conceived this idea by watching the leg development of slaves engaged in heavy labor. The development of slaves was analyzed as a means of devising exercises similar to the work they did. They were well aware of the fact that a person could never become as strong from work as from exercise. Slaves were never allowed to exercise; it was strictly for free citizens.

The ancient Greeks had three popular lifts which were done with square or oblong stone blocks. They grasped handles cut in the side of the block and lifted the stone to the knees, then to the waist, then to the chest, and pressed overhead in a sort of continental style. A second lift was performed by raising the stone to the shoulders in the same manner, then walking or running with it and throwing it. Both the amount of weight lifted and the distance thrown were taken into consideration. If the weight was shifted over to one hand and then thrown, more credit was given. Weight lifting had not completely separated from weight throwing at this time. In the third lift, the lifter straddled the stone, bent over and encircled it with both arms, straightened his legs and raised the weight just a fraction off the ground. In order to keep the stones from cutting the body, a special lifting costume was worn, a leather apron to protect the legs and a vest to protect the upper body.

History seems to indicate that the Greeks invented the barbell, although there are no written records. The Spartans used huge iron discs with holes in the middle for money. These discs could have been placed on a wagon axle and lifted in the same manner as a barbell. Long after Greek culture died out, the Arabs kept it alive and spread it over after the Crusades. The first record we have of the barbell is from the Arabs. When Mark Berry was editor of Strength magazine an Arab wrote to him and told Mark that weight lifting was as old as the hills among his people, then proceeded to describe the apparatus used. A long wooden handle with the ends soaked in water was driven into holes cut in the middle of two stone blocks or discs. The wood would expand and fit tightly into the holes. I believe the barbell is one of the many things the Arabs learned from the Greeks and kept long after it had been forgotten in .

The sixth century after the Persian War was known as the age of strength. Boxing, wrestling and weight lifting were the most popular sports. Until that time, track athletics were the favorites. Sculpture was influenced by this trend. The Farnese Hercules is a weight lifter, while Heracles of the Parthenon is a track athlete.

The story of is well known. He began lifting and carrying a calf, and continued until it grew into a bull. He was also the wrestling champion of the world, but was once defeated in a weight lifting contest by a shepherd named Titormus. When challenged by Milo, he lifted a huge boulder over his shoulder, a boulder that could hardly move, then he carried it sixteen yards and threw it into the river Euenus.

At block of red sandstone was found with an inscription of it telling of Bybon who lifted it over his head and threw it. The block weighed 315 pounds. a block of volcanic rock was found in weighing 480 kilos (1,058 lbs.), and dated close to the 6th century. The inscription reads: “Eunmastus, son of Critobulis, lifted me from the ground.” Theagenes, at the age of nine, took a fancy to a heavy statue in the market place and carried it home, and as a teenager became a famous boxer.

Weight lifting contests were held only in the local games. In it took place only on an exhibition basis. All Greek athletes conditioned themselves with some form of weight training, but it was the favorite form of training for boxers and wrestlers.

Trainers had a fair knowledge of skeletal and muscular anatomy which they learned from sculptors. The physicians had nothing to do with the trainers, whom they regarded as untutored quacks. Both Hippocrates and Galen practiced gymnastics.

Greek art and medicine grew in some ways from interest in athletics. The study of medicine in its earliest days often dealt with the treating of sprains and broken bones incurred in sports activities.