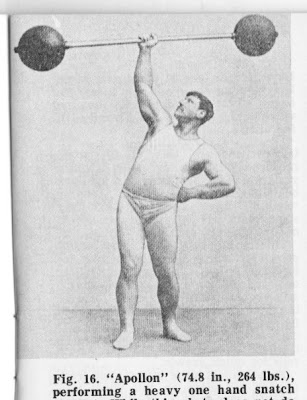 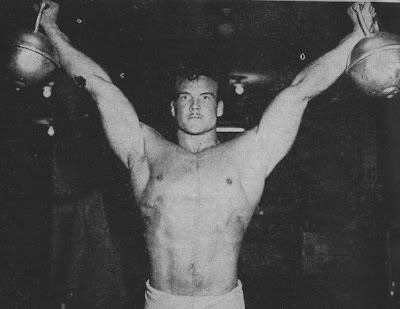 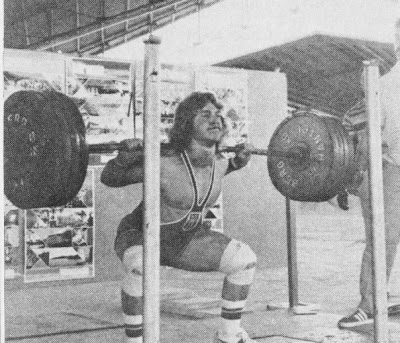 More useful in some ways than pinch-grip lifting as a test of general gripping strength, is the picking up and, where possible, carrying of barbells or dumbells having thick handles. By “thick” here is meant any bar of substantially greater caliber than the 28 mm (1 and one-tenth inches) which constitutes the standard diameter of Olympic barbell handles; in other words, of a caliber or diameter that is too large to be grasped without employing a “hooked grip” or thumb-lock. This means, for all performers except those having very large (long) hands, a diameter of about 1⅝ inches or over. The difficulty of lifting bars of greater diameter than 1 and one-tenth inches may be assumed to increase in direct ratio to the diameter of the bar. That is, the amount of weight capable of being lifted with one hand on a bar 2.2 inches in diameter is approximately ½ of that which can be lifted on a bar of 1.1 inches, and so on. Of course, as in everything else, there are individual variations in this respect, some performers having a relatively stronger grip on thick bars and others on bars of more or less standard diameter. While, as may be supposed, large hands are a definite advantage in lifting bars so thick that average-sized hands and fingers cannot similarly “wrap” themselves around the bar, it is still possible for men having relatively short hands and fingers to possess, or develop, extraordinary grip-strength.

In making the latter statement, I am thinking particularly about Louis Cyr, the French-Canadian phenomenon of strength. Cyr weighed generally over 300 lbs. at his height of only 68.5 inches. He was in his prime as a professional strongman during the closing years of the 19th Century. His sheer gripping power was enormous; and it is regrettable that no record was made of the amount of pressure he could exert on a hand dynamometer. However, one may possess a strong grip and still not be able to demonstrate it in the latter sort of test, as will be shown later.

Cyr’s hands, while relatively broad (4¼ inches), were only 7¾ inches long, which was less than a quarter-inch longer than the hands of an average-sized man of Cyr’s height. But Cyr’s forearms of over 16 inches (twice the size of his wrists!) endowed him with extraordinary gripping power. Here are some of the feats that Cyr performed which proved his strength of grip:

1. Snatched with either hand a solid “dead” barbell weighing 188½ lbs., the handle of which was 1⅝ inches in diameter and therefore precluded the possibility of Cyr’s using a hooked grip. Moreover, since Cyr was nearly seven per cent stronger with his right arm than his left, it can be assumed that with his right hand he could have snatched in the same manner at least 200 lbs.
2. In his contest with August Johnson, did a right and dead lift of 525 lbs. with a dumbell having a handle 1½ inches in diameter. Here, however, he doubtless used a hooked grip.
3. Performed a hand-and-thigh lift, using is right hand only, of 977 lbs.
4. Did a one (middle) finger lift of 522½ lbs., using a plain iron ring. This lift, however, should not be compared directly with lifts made later by strongmen who used specially padded “finger rings.”

One of the best tests of grip-strength, then, is to lift a barbell or a dumbell having a handle sufficiently thick to prevent the use of a hooked grip – say, a handle having a diameter of 2 inches. The bar should be of smooth iron or steel; and if in the form of a dumbell should have a space between the spheres or the innermost collars of at least six inches, so that no assistance may be gained by pressing the hand sidewise against either the spheres or the collars. To prevent the grip from slipping, chalk or rosin on the palms and fingers may be applied before each lift.

The best performers I know of in this test of lifting a 2-inch bar would have been the following. I cannot say “would be,” for I know of no lifter today who has a grip to equal that of these old-timers. That does not mean that there is no such man; it is simply that I have not heard of him if he exists. Ad if he does exist, I would appreciate hearing from him as to what poundages he can perform in various grip tests, particularly this one of lifting on a 2-inch bar. Here, then are the best of the old-time “grip-men.”

1. Hermann Goerner, of , who probably could have lifted with his right hand about 395 lbs. He regularly lifted in this manner, with either hand, his “challenge” barbell that weighed 150 kg (330.69 lbs.). This bell had a bar diameter of 60 mm (2.36 in.); and since Goerner’s right hand grip was at least 10 per cent stronger than his left, my estimate of 395 lbs. on a bar of 2 inches diameter is very conservative. Another remarkable feat by him was to pick up with his right hand a barbell of 522½ lbs. that had a straight, non-revolving shaft 1.18 inches in diameter, using an ordinary (unhooked) grip. Also, Goerner was by far the best performer in the one hand dead lift on a bar of standard (1.1 inch) diameter, using a hooked grip. Facing the barbell (not straddling it), he has lifted in this manner no less than 330 kg. (727½ lbs.). The diameter of the largest plates was 45 cm (17¾ in.).
2. “Apollon” (Louis Uni), the gigantic French professional of the turn of the century, could probably have raised about 350 lbs. He once nearly completed a one hand snatch of 226 lbs. on a bar 2.36 inches in diameter, the bell flying out of his grasp and falling back of him. If it be assumed that on this basis Apollon could have completed a snatch with a 2-inch bar weighing 210 lbs., this would have been equivalent to a dead lift 1.66 times greater, or about 350 lbs.
3. John Grunn Marx, “The Hercules,” about 315 lbs. The available information on Marx, who was a younger contemporary of Apollon, indicates that his strength of grip, for which he was justly famous, was nevertheless only about 90 percent as great as that of Apollon’s. Marx was also the champion of his day at bending and breaking horseshoes, a feat which is described later.
4. Louis Cyr, “The Canadian Samson,” about 300 lbs. This is on the basis of his known feats of grip-strength as listed above.
5. Arthur Saxon, leader of the famous strength trio bearing his name. Although Saxon weighed only around 200 lbs., which was considerably less than that of any of the strongmen listed above, he had very large hands (about 8.8 inches long by 4.7 inches wide). This gave him a strength of hands that was disproportionate to his all-over or general strength.

In connection with thick-handled bells, mention should perhaps be made of an “unliftable” dumbell long owned by the English physical culture instructor and weightlifter, Thomas Inch. This dumbell, the proportions of which are shown in figure the accompanying illustration, weighed 172 lbs. and had a handle 2.47 inches in diameter. Each sphere was 8½ inches in diameter; however, the distance between the spheres was only 4 inches, and this made it difficult or impossible for a man having really large hands (say, more than 4½ inches in width) to get a proper grip on the bar. Perhaps this was why neither Arthur Saxon nor Edward Aston were able lift the dumbell (and so pocket the $1000 award that Inch offered). Inch attributed his own ability to lift this weight to a strong grip and to “mental concentration.” He admitted, though, that he had to practice a long time before he became able to lift it. In any case, apparently no one other than Inch succeeded in lifting the bell between the years 1904 and 1956. In the latter year the weight passed out of his possession and was brought onto a stage in , for all and sundry to have a try at. Only then was the poundage of the bell and its dimensions (as just given) made public, since evidently Inch had chosen to keep this information a secret! I recall that sometime in the early 1920s I had written and asked him how much his “Challenge Dumbell,” as he called it, weighed and measured, and that he declined to give me the figures. Be that as it may, at the show in , three contestants each lifted Inch’s dumbell. One of these contenders was the well-known Scottish Games athlete Henry Gray, who stood 6 feet 4 inches and weighed 252 pounds. On his first attempt, Gray pulled the bell chest high! At another show, in in 1957, two competitors lifted what turned out to be a second “Challenge Dumbell” that had been owned by Inch. This bell, however, which had a handle 2½ inches in diameter, weighed only 153 pounds.

To have picked up Inch’s 172 lb. dumbell, by its handle 2.47 inches thick, would have been equivalent to lifting a 2-inch bar weighing about 212½ lbs.. Therefore, if Inch had taken his “unliftable” dumbell over to France about the time he first offered a prize to anyone else who could lift it, he would soon have been relieved of his award money! The middleweight “grip-men,” Leon See (65.75 in., 155 lbs.) and (66 in., 165 lbs.) each of whom had lifted Apollon’s 226 lb. barbell with its 2.36 inch diameter handle, would doubtless have found Inch’s bell easy pickings; while John Marx, provided he could get his large hand around the handle of the weight, would – as the English amateur weightlifting champion of those days, Tom Pevier, opined – “probably have swung it.”

But also had some very strong “grip-men” in Inch’s day who were little if any larger than ’s Vandenocke and See. Perhaps the most outstanding of these was the famous John Y. (Young) Smith, of . Smith was 66.5 inches in height and weighed usually between 160 and 168 lbs., with not an ounce of surplus fat. Years of hard work in his early days on the sailing vessels of had endowed him with hands of singular strength and incredible toughness. Here, as proof, are some of the remarkable grip-feats he performed:

1. Picked up a 220-lb. barbell in his right hand and a 200-lb. dumbell in his left hand, and carried the two weights a distance of 75 yards. Each bell was said to have a 1½ inch handle.
2. Lifted a 200-lb. barrel (which stood on end) by the hoops, not the chines, or projecting rims of the barrel, but the hoops (the thin metal straps holding the barrel together)!
3. Cleaned with his right hand (and then bent-pressed a “thick-handled) dumbell of 225 lbs. Arthur Saxon, visiting Smith in 1910 or 1911, tried to similarly shoulder this dumbell, but failed to do so.
4. Lifted by the chines with his fingertips (the barrel being horizontal) a 52-gallon barrel filled with water, weighing about 440 lbs.
5. Hung by one hand from a vertically suspended belaying pin, while holding in his other hand 140 lbs. A belaying pin, which may be either of metal or wood, varies in diameter from ¾ inch to 1½ inches, thus being comparable to a climbing rope, although harder to grip on account of its smoothness.

In view of these performances, I estimate that Smith could probably have picked up about 260 lbs. on a 2 inch bar. This would have placed him right up with Leon See and as a middleweight champion of grip-strength.