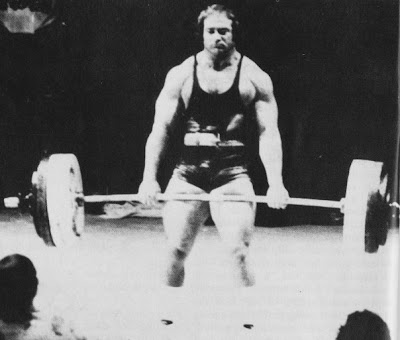 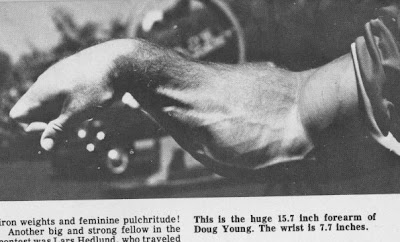 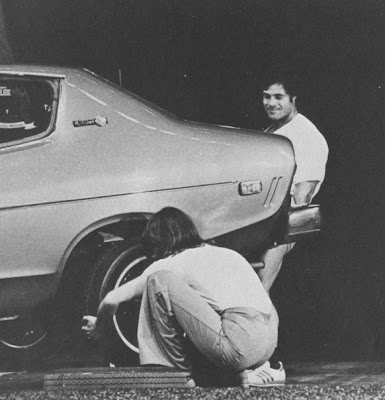 The lifting world is already well aware of Doug Young of course, since he won the National and World 242 lb. class titles the past two years. By way of a quick review, Doug was an all-state football player at () High School where he weighed only 178 as a senior but had lightning quick reactions and great strength. He bench pressed 315-320 in high school. He started all three years at Texas Tech despite three separate injuries that required surgery, including a broken leg and two knee injuries. Doug was still small for a college lineman at 5’11” and 200-205 lbs., but he had moved his bench up to 400 by this time. Injuries and lack of size kept the pros away and in the following years he was in some rodeos. Doug moved his bench press to 540 by October of 1973, then the two National and World titles and a 2000 lb. total, which brings us to the subject for today – how Doug Young trains to peak for a big meet.

Doug likes to take 12 weeks to peak, but it could vary a little because of an injury or something but this is the basic cycle he likes to follow. The first four weeks he uses 4 sets of 6 reps in the bench press. On the 4th set he goes limit. He uses each rep as a 5-pound indicator for his next workout. He starts the cycle at 400 lbs.

In past programs he had done one limit set of reps at the end of his workout with anywhere from 50 to 100 lbs. under what he was working with his program. His normal peak on the 5 sets of 3 is 500 lbs. but he has reached 520 as of this writing.

In the squat and deadlift, Doug likes to use a 5-set program on a 5-4-3-2-1 sequence. This was an old program used by Steve Stanko to become a National champ before Doug was born, and it indicates that solid, basic programs remain solid years later.

This is hypothetical but it’s the way he would do it. It would probably run more on the order of 10-lb. improvements or he’d obviously peak well ahead of the contest. Doug uses his peak set of 5 as a contest indicator. He usually goes 100 lbs. over his peak set of 5 in the cycle for his second attempt. If he was up to 620 x 5 in the cycle, his second attempt would be 720 at the meet, with a third attempt based on conditions at the meet. For some meets, however, he does a limit double seven days ahead (his last squat workout) and uses that as his indicator rather than the set of five. He usually adds 25 lbs. to that double. so a 700 x 2 would indicate a second attempt at the contest with 725.

The deadlift is roughly the same but he stops this 10 days ahead of the contest. There is another variable in the deadlift. Sometimes the duration of the contest makes it hard for Doug to beat his training best and sometimes he goes all-out for a big one to get a certain total. If he is well ahead he gets one total he wants on the second attempt, then shoots the works on the last attempt for another total he has in mind.

When he is gaining weight, Doug says he eats “all I can get my hands on” and whatever he desires with no special emphasis on how many grams of protein, just a lot of basic food. He admits to eating “french fries and cheeseburgers” when he wants them. He feels bodybuilders and some lifters may need to make a science of their diet but he eats what he enjoys most of the time. Doug usually weighs 10 to 20 lbs. over the 242 limit, but about three to four weeks ahead of a meet he goes to a cottage cheese, tuna fish, yogurt and liquid protein diet. He loses about 10 lbs. and the last week before a contest he loses the other 10, usually about 8 lbs. liquid loss or drying out.

One final word about that 12-week cycle. Terry Todd used to do it in 6-week cycles but in either case the point is the same. The cycle starts below what the lifter can do, but it is still hard work. Rather than going for his best at that time the lifter is building a strong base for a future record attempt, leaving incentive with room to improve each week and building a positive, no failure momentum that pushes him past his previous best by the end of the cycle. It’s nothing new. Todd did it before Young and other lifters before Todd. For lifters who have a hard time maintaining a strong incentive over a long period of time it might be a good idea to figure out a cycle system based on their own needs.