We have now finished our bodybuilding program preparing you for the snatch (note: Rader, as well as many others, recommend putting in some foundation and flexibility work before going on to the quick lifts). Now we must take up an exercise program for the development of power and speed.

For the development of the necessary power for the snatch we will use much the same exercises we used for the bodybuilding movements. A man needs terrific power in his legs and back as well as in the pull of the arms. To attain this power you will cut the repetitions down from 2 to 4 reps, and do lots of sets.

Let us again go to the squat, which is a basic exercise in all power programs. You will load all the poundage you can handle for about 3 or 4 reps on the bar on squat racks. A good set of squat racks is just as important to a barbell man as the bar is.

Now take the bar on your shoulders and step back from the racks so the bar will clear as you squat. Go into about a half squat and back up. You will take a deep breath and hold it while squatting. Never try to do a heavy squat on empty lungs - it is not safe. Now do another repetition and try to go down to a parallel position with the tops of the thighs. Don't go any lower in the squat at any time with heavy weights.

Every man working for power should learn certain safety measures in the squat so that if he gets stuck in the squat, as he sometimes will - (in fact if he doesn't get stuck each set he isn't working as hard as he should) - he can bring himself back up from the low position. He should always try to come up himself rather than ask training partners to take the weight from his shoulders. To ask for assistance from training partners gradually develops a negative mental attitude. Fight your own battles with the weights up to a successful conclusion. This is necessary if you truly want to excel in your lifting.

Here is how you should learn to come back up from a squat in which you get stuck. First you should realize that the bar is not going to roll off your shoulders as long as you keep your position and don't lean backward or forward. In other words, you can afford to remove one hand from the bar and place it on the thigh and push vigorously. This will give you the necessary aid to help you come erect. Don't help with the hand any more than is needed. You should also develop the ability to take both hands off the bar and push the thighs with both hands. This will be a still greater aid in unusual cases.

And there ya has it.
Forced rep squats circa 1957.

In order to learn this you should do a lot of your squats with the use of the hands on the thighs. Learn that the bar won't roll off the neck. It won't take long for this method to become almost second nature with a heavy weight. Just remember - don't go below parallel with the tops of the thighs in the style of squatting we're using.

Generally it is best to start out with a comparatively light weight for the first set or so as a warm up exercise, for you might pull a muscle if you start right out with your maximum poundage. Then add weight and work up each set to your maximum poundage that you can use for ONE REP. This should take about 6 or 8 sets of from about 5 reps on up to 1 or 2 on the last lift - if you think you can get a 2nd rep do it. After this heavy stuff reduce the weight way down to a very light poundage - say 150 if you are working up to 400, and use this to do a very low squat to stretch the muscles for low positions and move around in the low squat as described in last issue.

Note: Liam has been kind enough to share the November '57 issue with us as well.
I'll get to that in the near future.

Actually, your power program should start out with the upper body, and that means the presses and pulls. Start your regular presses with about 3 reps per set and fairly good style, then add poundage for each set and gradually work up. Make your first set rather light for a warmup as you always want to warm up well when doing power work, and this means for each exercise. Doing squats doesn't warm you up up properly for doing presses or vice versa.

As you work up in poundage you will gradually use more back bend until you reach the maximum with back bend, then start jerk pressing by jerking with the the legs and then pressing on out. This will allow you to work up to a very high poundage and will help you to lock out fast in the snatch. Do some of these with a rather wide grip similar to the snatch grip.

Now for our pulling exercises - they are the most important part of the whole group for the snatch. Let's start with the heaviest poundages. This will be the dead lift. We never do a regular dead lift when training for power in the snatch or the clean, but rather a fast pull as in a clean.

Take a poundage for warmup and get set just as you do for the clean and snatch and pull it fast and high just as if you were going to clean it. Do a few reps from the dead hang after the first pull from the floor. Now start adding poundage and gradually work up by doing 3 to 5 reps per set until you reach a point where you can only do about 1 or 2 reps and can only pull it to about waist high. This will take quite a few sets and reps. You will be surprised how much poundage you can work up to and how much it will help your snatch pull.

Your first reps will be with weights light enough so that you can pull to the level of the eyes, then, instead of lowering the weight you should dip the knees slightly and snap the weight straight to straight arms. This is the power snatch that we see in the photo at the bottom of page four in the last issue.

Will you cut that out, Peary! 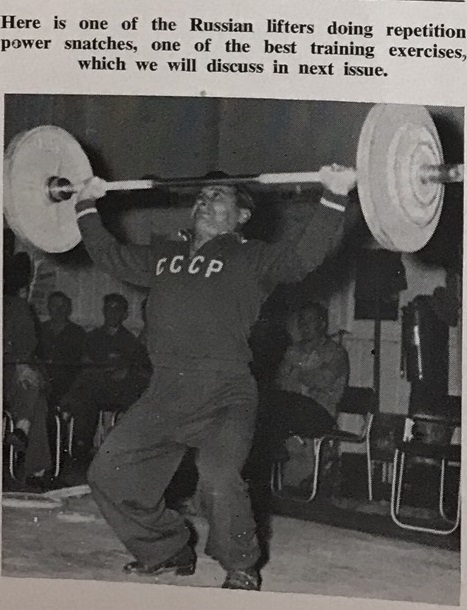 Then continue to add poundage. As you add poundage you won't be able to pull high enough to get the arms straight and finally will only be able to pull to about the height of the waist. Do the first rep of each set from the floor and the rest from the hang position. You should do the lighter poundages with the wide grip used in your snatches.

Now this pulling will run into a lot of reps and a lot of work but it is perhaps the most important exercise for snatching, for there are two basic requirements to a high poundage snatch - pulling the weight to maximum height (which means power and speed), and getting as low as possible under the weight (which means flexibility and speed).

In developing a training schedule we suggest that after you have passed the beginners stages as described in the bodybuilding program last issue, that you start following this power program. (I'm woikin' on that article already, Peary! Hey, how could I not include an article here that features the duck waddle.) We would suggest that you work at these power exercises the first part of your workout just as described above. After you have finished with them you can go to the practice of the snatch itself with rather light poundages to develop timing, speed, low positions, flexibility etc., as described in previous issues. If you do this you will have a rather lengthy program so that when specializing in improvement of the snatch you will find that you hardly have any time and energy for work on the other lifts - that is the press and the clean & jerk. However, they will not likely suffer during this specialization period. 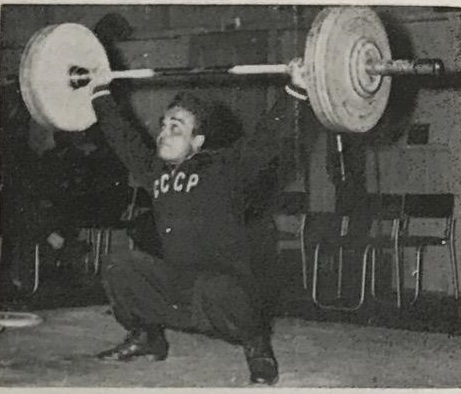 Low position practice for flexibility should be an important part of every training program and after power exercises you should take a bar that will push you down and go into low positions to stretch the muscles as this lifter is doing in training at the Olympics. Take a heavy poundage with a snatch grip and jerk press it to arms' length and then sink into a low position in the squat or split (whichever style you use), then lean forward under the weight to stretch the shoulders. Several reps of this will help. 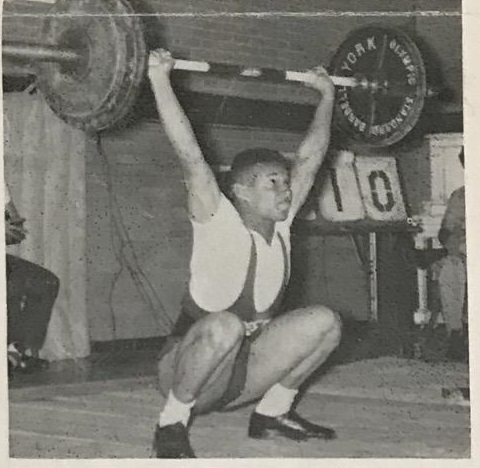 Collac of Puerto Rico snatching 210. He is only 15 years old but has great power and excellent style as has the unidentified fellow below lifting at the recent Mid-Western Championships. 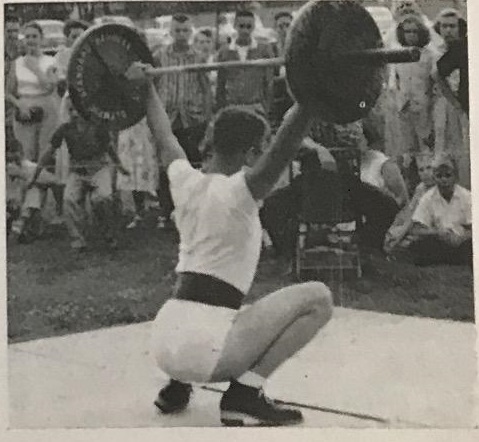 Well howsabout that! I already have Rader's Snatch article from the November issue of Lifting News here: