There were several articles on Frank Calta's "Rotation for Recuperation" approach to training in the magazines of the early '80s . . . Thanks to Liam Tweed for sharing this interview with him! 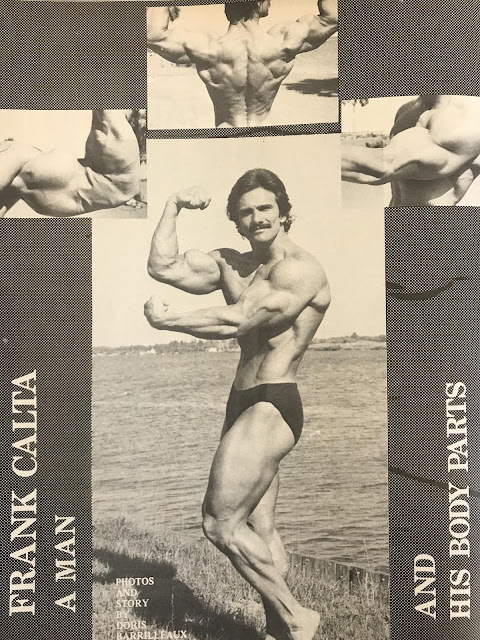 Q: Frank, you have a vary symmetrical and shapely physique. I'd like to discuss how you  handle some of your individual body part routines. For instance, what do you do to bring out the outer head of your triceps, the medial head; it really adds dimension to the arm line and yours is exceptional.

FC: Thank you, Doris. The first exercise I do for my triceps is the pushdown and I use my specially designed V-Bar. It works more on the triceps and less pressure is on the wrist.  I'll do 3 sets, heavy weight - 150, 6-8 reps.

Note: Dave and Laree Draper had a real sweet thick handle V-bar for pressdowns and pushdowns that got rave reviews when it was still available. If you get lucky and manage to round one up, it'll be worth the effort.

For my second exercise I do French Presses. I do these on the Universal press. The reason why I prefer that over a barbell is because it gives me tension at the top. With a bar, it doesn't quite give me that tension. I use a close grip, 2 sets with 150.

The third exercise is the close grip on the bench press. I'll do 2 x 6-8 with heavy weight, around 315. Everything I do is performed with strict form. I believe in working the target muscle rather than putting four different muscles into play just to get the weight up and down. That's all I do for my triceps. Occasionally I'll throw in a 4th exercise depending on my feel. Nine times out of 10 I really don't need it because the triceps gets worked indirectly more than most bodyparts. If you do bench presses your triceps get worked; do overhead pressing and your triceps are worked; and naturally this is all in addition to the more direct triceps work.

Q: Do you ever change or alternate exercises?

FC: Sometimes when I do four exercises I'll do lying French presses with 170 as hard as I can go, but I don't do more than two sets.

Q: How about where the deltoid goes into the arm? You're very thick there. How did you work to bring about this type of separation?

For the delts I do the Press Behind Neck, Bentover Lateral Raises, 3-4 sets the first exercise - 6 reps with heavy weight. I'll go up to 250. Next I do bentover laterals with 55's, 2 x 8, and then I do Shrugs on the Nautilus machine, 2 sets with 300 for my traps. Occasionally I do two extra sets like I do for my triceps. In that case I'll do the Nautilus Row for the backs of my shoulders, 2 sets.

Q: You're very much against overworking, aren't you?

FC: Yes, those two bodyparts get overworked the most. I work out only 3 times a week. It is an unusual routine. There probably aren't more than a couple hundred people doing it now. Those who over the years have seen my progress tried, made good progress themselves, then one told more so it's getting more popular, but I started it about five years ago.

I call it a Rotating System. You rotate the bodyparts.

This way I work the bodyparts once one week and then twice the next. Training on this kind of system you won't overtrain. It allows you plenty of time to recuperate. Anyone who's ever tried it and stayed on it for at least 3 months has made hellish gains. Being in the business, I have put a lot of people on that program. I don't start them off that way because I don't feel beginners are ready to do the different variety of exercises.

I start them off 3 days a week working the whole body. For instance, they'll do just bench presses for their chest, leg presses for their legs, one exercise per bodypart for 3 sets. I'll keep them on that for at least 8-10 weeks before I turn them over to that rotating system. As they progress the routine will progress. As they get stronger the routine will actually cut down because the stronger you get the less you can train. You get so strong and you're in such good condition that you can over-train. People don't believe that. When you start doing 450 benches and squatting 600 it's easier to overwork.

Q: Your delts are also full from the rear showing three muscle sections totally in balance. How did you bring up the rear delt and achieve that tie-in with the muscle that inserts into the shoulder blade?

FC: There again, it is from doing the bentover laterals, and bentover rowing for my back. They definitely come into play with the bent rows. Some people just have a little more potential for different bodyparts than others.

Q: You must have a lot of potential because from your before pictures of you no one would believe it's the same body you have today!

FC: I have them hanging here in the club and no one DOES believe it. When people come into the club they may think it's my brother or someone else's body with some trick photography on the head.

Q: Some people have natural calves, natural arms or whatever, but from the before pictures you didn't have ANYTHING natural.

FC: I don't really think I did, but the POTENTIAL has to be there. If I hadn't worked my legs, they wouldn't have been in proportion to my upper body. If I'd have ignored my back it wouldn't have been as developed as it is now. Everyone has a certain potential. Not everyone has the potential to build 20" arms, even if everyone does the same routine. You're either born with it or not. The hormone balance and function is very important too.

Q: You might have been born with it but it sure didn't show till you started training. You've got a super goose-neck effect on your forearms; they sort of look like bowling pins. Did you go for that or was it natural?

FC: The way I was training there for a while had very little rest time. It's from grabbing such heavy weights on lat pulldowns or bentover rowing. Just like the triceps and shoulders . . . anything you do you are working your forearms - chins, curls, you're working your forearms so I never really concentrated on my forearms. They always got pumped up. I figured they were getting stimulated. I've seen bodybuilders work their forearms two and three times a week and they are skin and bones they're so overtrained. I am so convinced about people being overtrained, especially being in this business because I SEE IT. I see the guys that do it 3 days, 4 days, 6 days, and the guys training less and working harder are making better progress.

Q: I know, we can tell by looking at you. You don't train that often and look at the gains you've made!

FC: No, I don't train that often but I did stay at a Holiday, oh hell, but when I do train, I train HARD. I use weights as heavy as possible with good form.

Q: But it's not your entire life dedicated to training 6 days a week.

FC: I tried 6 days a week about 7 years ago and I was thin and just felt run down all the time. My strength was bad and I was weak.

Q: When you pose these body parts, do you have any secrets for making them stand out under the lights or in standard outdoor photos?

FC: No, it's no secret. It's all in the practice of posing. If you're a good poser, no matter where you're taking pictures the muscle is going to show. If you're overweight or smooth or not in shape no matter how good you can pose the muscles just will not show. If you've got muscles and you know how to pose and you have control of the muscle group you are going to make it do what you want. I've learned good control of my thigh muscles where I can make them move up and down. People ask how I got those grooves in there but a lot of it is control. But then I have different exercises I use for my legs that no one really had a chance to use, like the leg press I designed. I think that helps a lot and everyone who has used it has said the same thing. This press is on a 45-degree angle.

Q: You're a very good poser. How did you learn to pose? Did you copy anyone?

FC: I think I have a lot of natural ability. I'd study the mags and see a certain pose I liked and I'd try it. I'd look in the mirror. Then I'd put them all together. Then as my physique started maturing and getting more muscular I just started figuring out my own poses and just kept practicing. I think karate helped a lot. I had 4-1/2 years of karate and I think with the flexibility and balance it helped a lot. Some people can't walk and chew gum (they don't get sore feet and cavities!), I was just gifted with good balance. But practice is most important. A football player or sprinter wouldn't be nearly as good if he didn't practice. You just have to practice what you want to be.