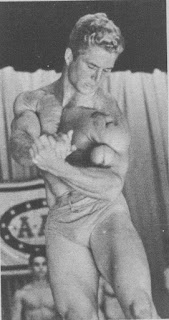 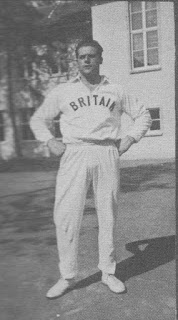 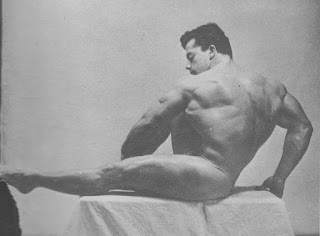 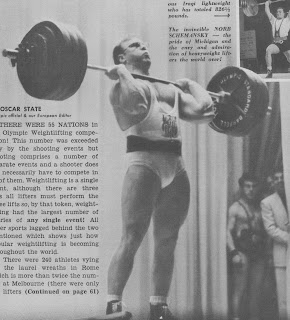 How to adjust the balance of a body which, by nature, is either top-heavy or bottom-heavy is a subject on which little has been written. This article should, therefore, be of great help to those who need just this kind of "compensating symmetry." Did you know that your body has its own built-in measuring unit? It's your navel -- and if Mother Nature has seen fit to fashion you according to her master pattern, your navel will mark the exact center of your body, with your head and torso being precisely equal in length to your waist, hips and legs. However, there are many men on whom Ma Nature has frowned rather than smiled. These are men of such imbalanced proportions that their upper bodies are either much longer or much shorter than their lower bodies. You'll find them in the so-called "average" height group -- men who measure from 5' 7" to 5' 9" usually. Why? No one knows, unless there are more medium height men than others. It is, however, a physiological fact.

Now, if you take up your tape measure and measure yourself accurately from the navel up and then navel down and find that your upper body is an inch or so longer than your lower body (or vice versa), don't despair. Be of stout heart and good cheer and let us help you compensate for the "shorty" part.

Since those whose torsos are longer than their lower bodies are far more numerous than those who are imbalanced in the opposite direction, we will direct our efforts to them this month, saving the latter group for discussion in the next article. [This article never did materialize]

But rather than generalize about this odd quirk of nature let's give an example of a star bodybuilder who stands 5' 9", yet whose legs once appeared far shorter than his classic upper body -- until he discovered the secret of "compensating symmetry." You've all seen him many times in these magazines -- he's one of the handsomest and best built men -- popular Glenn Bishop. Now, don't for a moment believe that Glenn had the advantage of working with some renowned physical instructor in a big, chrome plated, plush lined commercial gym. What he accomplished was done in his own home gym, equipped with a set of barbells and dumbbells, and some assorted apparatus which he conjured up "out of his head."

But even more than that, it was his artistic instinct for the absolute "rightness" and perfect balancing of all his body parts that kept him on the sure path to impressive physical development.

How did he harmonize his upper and lower body development? In a nutshell, what he did was perform only certain exercises and perform them only in a certain way that would maximize his upper body width -- minimize his lower body bulk -- while maintaining the smallest possible waist.

That is to say he exaggerated his upper body width -- kept his waist so small and trim that the "lat flare" would be more highly pronounced as it flowed into his lower body -- and used a controlled direction of his leg exercises so that both thighs and calves would appear terrifically muscular  without giving the slightest hint of bulk.

Today, if you should see Glenn on the beach, you would exclaim, "How perfectly he is built!" You would see him as "all of a piece." You would not single out his pectorals, shoulders, back, thighs or calves for exceptional praise, nor would you compare the development of one to another. Definitely his body is the "sum of all its parts."

Make no mistake about it . . . and had Glenn gone in for heavy thigh and calf work he could have developed a tremendously massive lower body. Such is his muscle potential that his calves -- now 15.5 inches -- could be easily enlarged to 16.5 or 17 inches if he so desired. His thighs, which are very muscular with highly chiseled separation -- at about 23.5 -- could be brought to a massive 25.5 or 26 with little effort. But what good would this do? What's the point of proving that you can have massive thighs and calves if in so doing the overall picture is marred?

No matter how easy it is for you to build muscle, if you have one body part that overbalances another it is foolish to work both parts to their greatest size. You'll be a freak if you do.

When you work at the weights, thank God for what is naturally well formed, but think more about what isn't. Work on what must be corrected before that which you would like to embellish or enhance.

Assess your physique correctly -- searching or what is too long or too short, comparatively speaking -- what is too thick or too thin -- and what you can "let ride" for awhile until you have concentrated on that which simply "cannot wait."

Quite literally you must do the exact reverse of what beginning bodybuilders are urged to do -- you must specialize to generalize. Only when you have gotten the process of realigning your imbalanced body divisions well in hand can you "pull out all the stops" on a more massively-generalized program.

Now, before giving you suggestions to help you accomplish the task of "symmetricalizing" and imbalanced physique, here are some rules of thumb you should observe:

1) Concentrate on widening the upper body through intensive work on the deltoids.

2) Don't overemphasize the trapezius muscles, because thick, "bunchy" traps have the appearance of narrowing your shoulder width. And almost invariably it is the man of medium height who is prone to quickly developing oversize trapezius muscles.

3) Widen rather than thicken the the lats through chinning from every angle (chin-to-chest, one-arm, back-of-neck chin, etc.), and by doing dumbbell pullups to the armpits. Don't do heavy barbell rowing exercises nor heavy stiff-legged deadlifts which make the torso too dense.

4) Don't do exercises which make the pectorals too thick. Instead, concentrate on exercises which deeply outline them and give them a "square" look . . . thus further widening the appearance of the chest.

5) Work hard on your arms but not so much that the triceps appear wider than the deltoids. Again, much of your torso width disappears.

6) Strongly work the serratus muscles which give line and "drama" to the torso; and the abdominals . . . bringing out every "cut" possible. You should so work the abdominals that they have the appearance of being part of the lats and serratus . . . a true classic look.

7) Keep your waist as small and as trim as you can.

8) Don't overdevelop the neck. Get it strong, columnar and very strong in appearance, but not like a wrestler's neck. This also minimizes the width of the torso.

9) Keep away from forms of squats that can enlarge the buttocks. They should look trim, but not like butterballs.

10) Don't do heavy exercises which cause the upper legs to look too heavy . . . likewise the calves. Keep them smaller so that they look longer. Work for a very lithe look rather than a "bulked up" look.

Do side, front and bent lateral raises . . . lots of 'em! Use them in supersets with one-arm dumbbell presses (lots of them, too).

Don't do high pullups for the front deltoids, these will only enlarge your traps all out of proportion.

Do incline and decline presses with heavy dumbbells to give squareness and sharp outline to the pecs.

Don't do heavy barbell or dumbbell flat bench presses which "too thicken" the central pecs and give a "choked up" look to them. Keep the pecs well separated by outlining them.

Do lots of "round the world" or flying exercises and straight arm lying lateral raises.

Don't do lying bent-arm lateral raises which thicken the pecs about as much as flat bench presses do.

Use high sets, low reps and heavy weights in the incline and decline presses, and just a moderate weight in the barbell flat bench press. Use high reps in your flying and straight arm lateral raises.

Keep the chest lengthened by doing bent-arm pullovers with heavy weights. Although the torso is naturally overly long in your case, nevertheless it is important to do this exercise so that the muscular "flowing-in" of lats, chest and waist into the lower body is more dramatically pronounced.

Any good dumbbell or barbell exercise which builds the biceps and triceps is fine, but be sure you don't thicken the triceps so much that they "fan out" and "run away" from the deltoids when viewed from the front.

Do use a neck strap device.

High sets, high reps without weight on one day, and low reps with weight  on the next day, alternating in this manner throughout the week. The best exercises are the partial situp, the hanging leg raise, the leg raise while the head is at the high end of an incline board, and the side bend with light weight.

Do the hack squat, the Reeves squat, the leg curl and the leg extension, all with high reps and moderate weight.

Don't do full, half, or parallel squats with a heavy weight on the back.

Any good calf exercise works effectively for you. But watch that they don't get too "meaty," for a thick, round calf can make the leg look shorter than even a densely developed thigh can.


Next month we'll write for the bodybuilder whose chest is naturally thick, "chunky" -- the barrel-chested man whose upper body is much shorter than his legs. [This article was never published.]