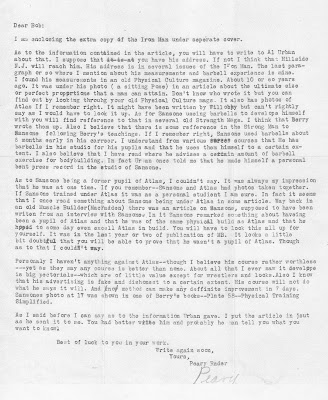 Letter From Peary Rader to Bob Jones
Click to ENLARGE


Every historical period of the Iron Game had its luminaries. Did you ever wonder if these names of note communicated privately? If so, what, or who, did they discuss among themselves?

Keep in mind that this was long before the days of email, Skype, Facebook, instant messaging, etc. Oh, to be a fly on the wall at the office of George Jowett, Earle Liederman, Bob Hoffman, Peary Rader, Andy Jackson, Bernarr MacFadden or a few others. Better yet, get your hands on their typewriter ribbons and carbon copies.

As luck would have it, a few pieces of vintage correspondence between these Iron Game Icons have survived the passage of time and will be presented to the Tight Tan Slacks of Dezso Ban audience. The first of these mailbag masterpieces is a letter from Peary Rader to hand-balancing great Bob Jones.

While the former remains a readily recognizable name in the course of Iron Game events, the latter would, at best, be classed as a "minor player," if remembered at all, by the majority of might and muscle history buffs. However, allow me to assure readers that there was more to Jones than meets the eye. Hence, a bit of background is required to properly set up and introduce Rader's remarks to Jones. 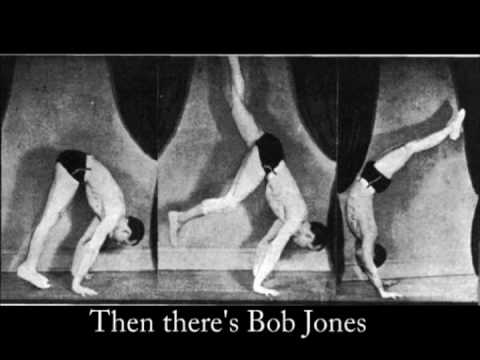 Regarding Bob Jones, I learned much about him upon having the opportunity to visit his Philadelphia warehouse back in the 1990s.  For starters, he maintained his own age of information without benefit of computers or electronic devices. Talk about a paper trail, this man maintained documents in duplicate and triplicate regarding just about every facet of his life. More remarkably still, he sometimes even had black and white photos of that paper trail.

Jones himself had been strongly aligned with the Milo Barbell Company prior to it running aground financially, and served as a focal figure in its transition after Milo was purchased by Bob Hoffman. Bear in mind that even though the Milo company had declared bankruptcy, there were customers' orders (and dollars) in limbo for a considerable period. Consequently, the patience of these longstanding customers, customers who Jones and Hoffman sought to make eventual York Barbell/Strength & Health magazine converts, was taxed severely. During this delicate transition stage, Bob Jones served as the "appeasement department."

As serious students of Iron Game history recall, in the late 1930s, Bob Hoffman sued Charles Atlas over false advertising claims the latter made. Specifically, Atlas gave the distinct impression in his ads to have built his eye-catching "bully proof" body sans apparatus of any kind, including barbells and dumbbells. However, it was known in the very esoteric, far-flung bodybuilding community of that day that Charlie had, in fact, originally acquired his prowess via the weights.

Because Atlas ads were quite successful, the contention settled over the hearts and minds (and don't forget, available dollars) of the mail order muscle crowd. Besides, it was tough enough to make a living selling barbells and dumbbells against the economic constrictions of the Depression. BoHo didn't need someone running around telling the world that weights were not required to build a handsome, rugged physique. Likewise, it had to be especially galling when the purveyor of this deceptive marketing tale had, in fact, been a barbell man.

Of course, in order to initiate legal proceedings, Hoffman had to show just cause and sufficient grounds to elevate the argument to that level. Enter Bob Jones. Whether it was of his own choosing, or he was formally "employed" by Hoffman to do the necessary investigative leg work to establish the facts against Atlas, I cannot tell you with certainty. However, I can tell you beyond any doubt that Jones was an absolute bulldog when it came to moving heaven and earth to expose Atlas as the bona fide weight trainer he was. Again, thanks to surviving correspondence, it is crystal clear that Jones tapped any and every source imaginable inside and outside of the mail order muscle world in this, what would appear to be, a personal crusade.

Obviously, Peary Rader was one such potential information avenue Jones sought out,and you see here the Iron Rader's responses. Incidentally, some of Peary's off-the-cuff comments display a bit more candor than he would usually offer in print.

And for the benefit of the history detectives out there, the postmark on the envelope containing Peary's letter to Jones indicates that it was mailed on June 20th from the Alliance, Nebraska post office. Unfortunately, the final digit of the actual year is illegible in the stamp. On the other hand, if it is of any assistance, Peary's letter was mailed to: Milo Barbell System, P.O. Box 6777, North Philadelphia, PA.

By the way, if you enjoyed the glimpse at these Iron Game pen pals, you might also enjoy the upcoming 1932 letter exchange between Bob Hoffman and David Willoughby . . .