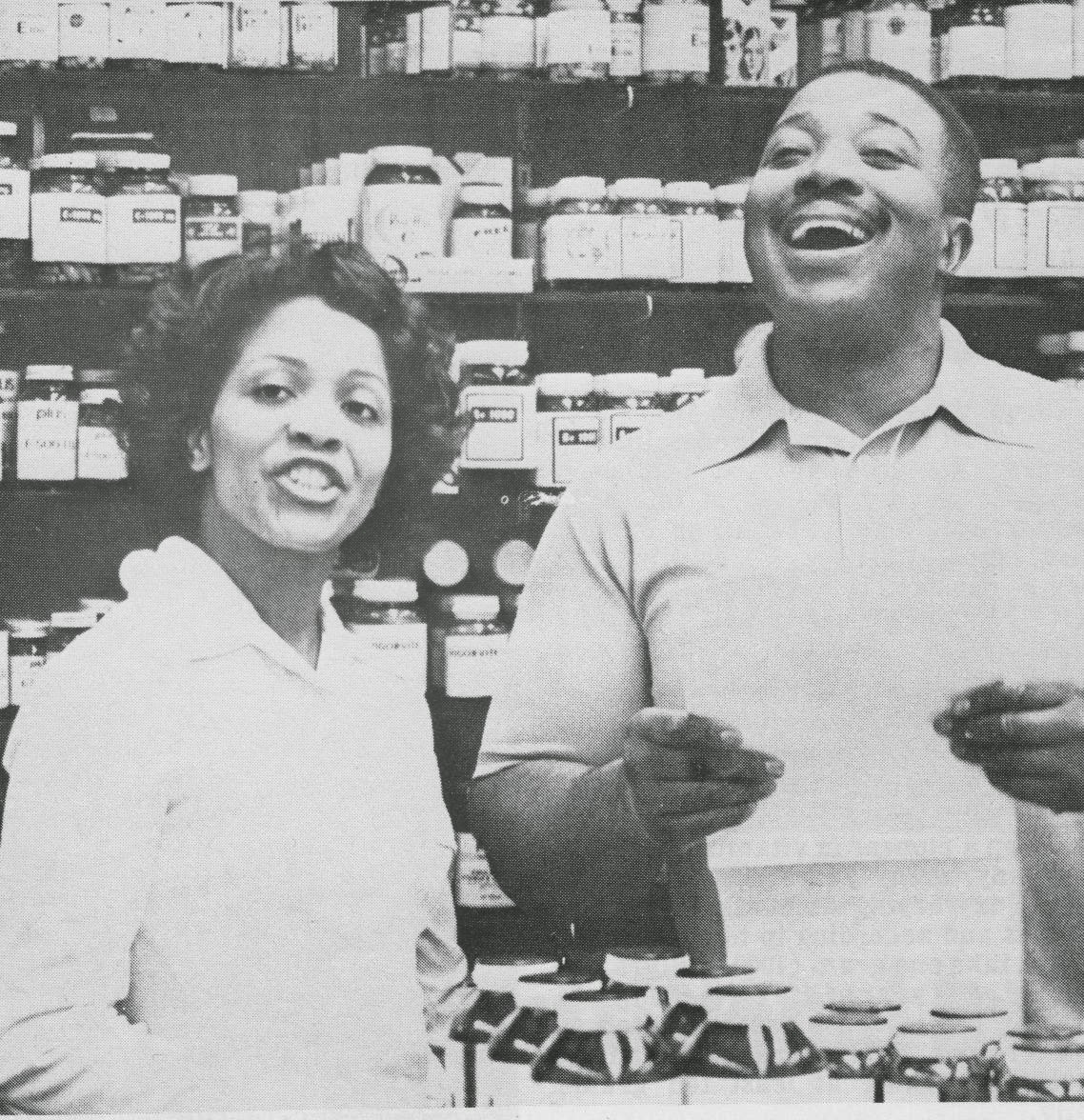 Leroy Colbert and his wife, Jackie, in one of their health food stores which are so highly successful, and part of the reason is the couple's exuberant good nature and obvious joy in living. Leroy, at one time, had one of the top physiques in the world until an injury sidelined him from competition. 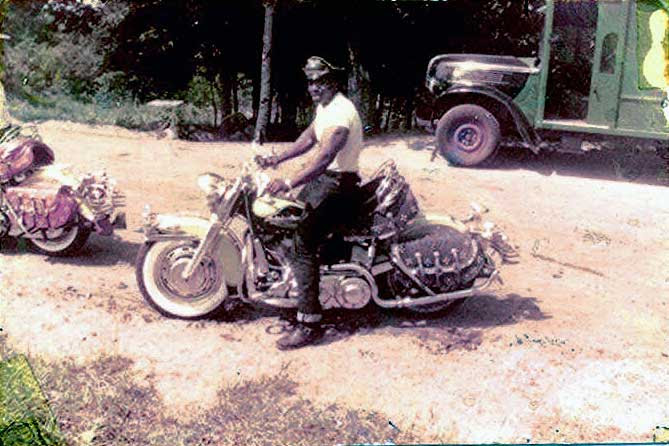 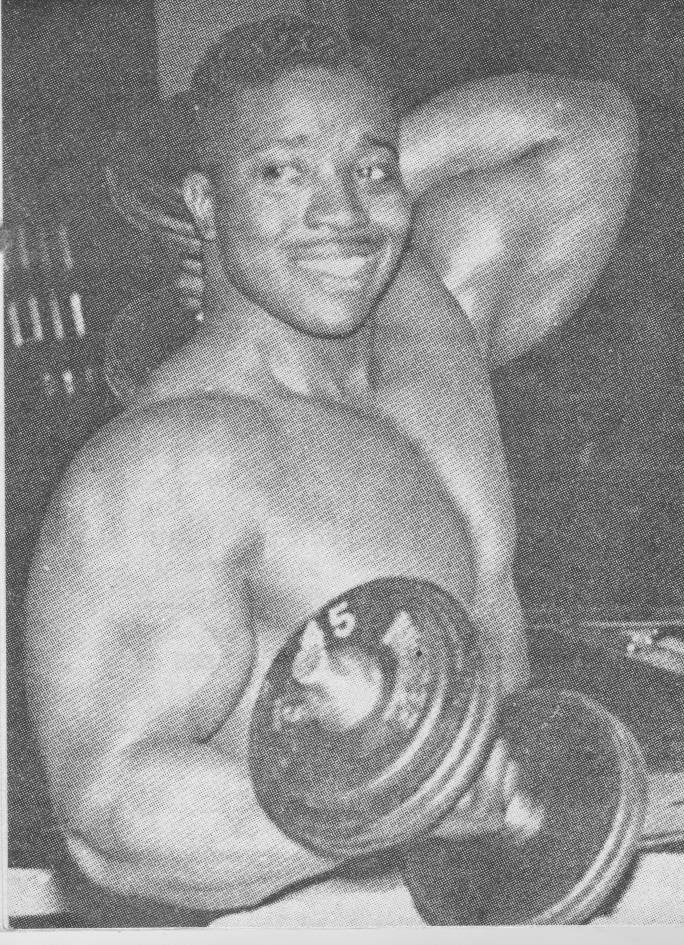 Leroy doing some dumbbell work for his arms. This photo was taken some years ago, shortly after his injury and while he was getting back into shape again.

THE LEGENDARY LEROY COLBERT:
HIS TRAINING PHILOSOPHY
by
Howard Alpert
(1977)

When the definitive history of bodybuilding is written, a significant section will be devoted to a man who 'rewrote' the rules of training and whose physical development still remains as a standard that other bodybuilders try to reach. In an era when a 16-inch arm was considered very good and an 18-inch one was something that trainees dreamed about, the fabulous Leroy Colbert smashed all barriers by developing a 21-inch muscular arm. Only a near-tragic accident prevented him from going on after winning the Mr. Eastern America title to become Mr. America and Mr. Universe.
However, the unfortunate event had a silver lining. It gave Leroy some time to seriously think about his future. He knew that he wanted to find a career doing something that would help people live a healthier life. At first, Leroy though about opening his own gym. Then he realized that he could reach many more people if he had a health food store. The idea of opening a traditional health food store was not in keeping with the Colbert desire to do things in a bigger and better way than they had been done before. Finally, Leroy decided to open a 'health department store'.

Today, Leroy and his lovely wife Jacqueline own and operate the two World Health Centers in New York City. These are unique establishments that contain everything from protein supplements and vitamins to fresh organic vegetables, fish, eggs, and meats, all of which are delivered daily. In addition, each store contains a large selection of exercise equipment.

When I discussed with Leroy the idea of doing an article about his training philosophy the concepts that helped him to develop one of the greatest physiques ever seen, he graciously said that he would be only too happy to provide this information for readers. If you could see the busy schedule Leroy maintains during a typical day, you would get a better understanding of how difficult it was for him to set aside time for an interview. You would also get a clearer realization that he is so dedicated to helping others that he did provide the time even though it meant extending his working day well into the night.

Before Leroy stated his training ideas, he wanted to be sure that I set down his views on using steroids. "You know me long enough to know that I rarely get angry. But when guys come in here and tell me that the only way they can build a good physique is by using steroids, I want to grab them by their necks and shake some sense into their heads. How can anyone be so foolish as to play Russian roulette with his health? Fortunately, I have been able to convince a considerable number of fellows that steroids aren't necessary by showing them photos of the guys that were my contemporaries when I was competing. How many bodybuilders today can equal the development of Jack Delinger, George Eiferman, Marvin Eder, Reg Park, and, if you want to talk about the defined and vascular physique that is in vogue today, which of the present day stars would like to compete against Roy Hilligenn or Bob Hinds when they were at their peak? Oh yes, there were also a couple of fellows named Bruce Randall and Enrico Thomas who would have given today's competitors a few nervous moments. All of these buys and many, many more built their bodies to exceptionally high levels of development, and they did it the way we did it at that time - through consistently hard training. And we didn't have the information that the guys today have. Nor did we have the different types of supplements - liquid, predigested, even without any carbohydrates. All we knew was that if you wanted to gain weight and size, you trained like the devil and ate everything in sight. When you wanted to cut down, you trained like the devil and ate less. If we had the facts on nutrition that are common knowledge today, we probably could have gotten results in half the time. No, I repeat that the most foolish thing a bodybuilder can do is to take a chemical substance into his body, a substance whose side-effects are potentially so dangerous and that was never intended to be used by healthy people.

"With that off my chest, let me say a few things about training. When I started to train, the 'rule' was that you never did more than three sets for a bodypart. I wanted a body so badly that after using the three-sets idea for a while, I just decided I had to try something else. As I recall, Marvin Eder (I would like to add for Iron Man readers who aren't familiar with Marvin Eder's career, that he bench pressed 500 lbs at a bodyweight of less than 200, and did other feats of arm and shoulder strength that haven't been equaled to this day - Ed.), decided one day that we would do 10 sets of each exercise we were using instead of the usual three. Then we swore that we would meet again early the next morning to see if we were both still alive. When we felt the difference from training that way and found out that we both lived through it, I threw the 'rule book' out the window and started to grow as I never had been able to do up until that time.

"From that workout on, I decided to use my head. I used many types of routines until I found the ones that worked best for me.What I found was that 10 sets was the minimum I could use for my 'easy-growing' parts. Usually I did 15 sets for most parts and sometimes went as high as 20 sets a workout for those parts that were really stubborn.

"I found that working with very heavy weights that forced you to do the exercises slowly was not as effective as working with a weight in a continuously moving manner until you completed the set. I don't mean working so fast that you use sloppy form, but I mean that you don't actually pause at the top or bottom of a repetition but just keep moving the weight in a controlled, steady way. Notice that I said "controlled." I believe that you can't fully control a weight that is so heavy that you can barely do your reps with it. I get much better results by using a weight that makes you work but not one that you have to 'kill' yourself with to get through the exercise.

"I mentioned before that I usually did a certain amount of sets for a particular area. Actually what I did was to go more by the feel of the muscle and the pump I was getting. If I found that I was beginning to lose the pump in an area I was working, I would stop exercising it even if I hadn't completed the number of sets I planned to do. I found that any sets that weren't increasing the pump were a waste and perhaps were even overtraining the muscle. On average, though, I usually did about 15 sets for most areas.

"I used to change my workout around every two or three months. I found that if I tried to stay on exactly the same program month after month, I would go stale. Sometimes I would change several of the exercises. Other times I would just rearrange the order of the exercises. For example, if I was doing chins, pulldowns and rowing for my back, I might change my routine by beginning with rowing and finishing with chins. Sometimes I might switch to dumbbell rowing, bent-arm pullovers, and close-grip chins. There is an endless variety of changes that can be made. I found that each new program was a new challenge.

"When I did exercises like squats, bench presses, or deadlifts, exercises for which you would use sizable poundages, I would begin with about 2/3 of the weight I could handle on my heaviest set. I would work up to sets of 8 reps until I hit my top set of 8. This would take about four sets. Then I would drop back for two finishing sets of 8. For exercises that didn't require heavy poundages, I would generally stay with one weight for all my sets. I always kept the repetitions on my exercises between 8 and 10.

"I think that it is important to maintain a fast pace throughout the workout. I always began my next set as soon as my breathing returned near normal. I found that the more work I could do in a given period of time, the better I would respond.

"I think that if I had only one thought that I wanted readers to remember, it would be that consistency in training is the thing that separates the best from the ordinary. Train heavier on the days that you feel strong and lighter on those days that you really don't feel great, but don't miss a workout. Every champ I trained with rarely missed a workout. I don't mean that you should train if you are really sick, though we did because we wanted to build our bodies with such a deep intensity that we wouldn't even let illness stand in our way. Just don't let laziness cause you to miss a workout. Cut your poundages in half just to get into a workout on a real 'down' day. Very often by the time the workout is over, you will find it has been one of your better sessions."

With these concluding comments, Leroy said that he had to get back to work. Time had passed so quickly that the bright sunshine had been replaced by darkness. Judging by the pile of papers on Leroy's desk, I knew that he would be having a very late supper that night. But as we shook hands, he smiled and thanked me for giving him the opportunity to convey his thoughts to readers. I might add, and the photographs that accompany this article will substantiate it, that although Leroy expressed many of his ideas in the past tense he is still training regularly and is in excellent condition.

Leroy Colbert is one of the greatest champions the bodybuilding world has produced. His achievements and philosophy will remain as a permanent legacy to inspire the bodybuilders of today and of the future.