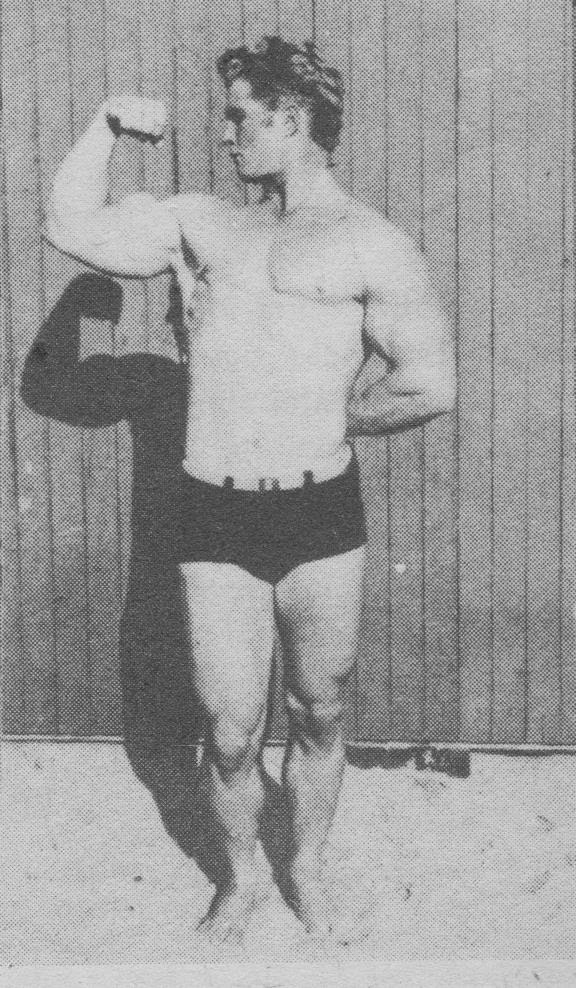 Muscle-Building Exercises and Weight Lifting:
Do They Mix?
by
Arthur Gay (1947)

What is your objective in weight training?

Do you wish to develop your physique to the greatest possible degree of muscularity and have as perfectly proportioned a body as your physical inheritance and potential will permit you to - - or are you desirous of becoming a great weight lifting champion and make an outstanding total on the three Olympic championship lifts?

There are thousands of young men today training at body-building and muscle-developing exercises at one and the same time.

Weight lifting is a sport in itself, and if you really wish to get some place as a weight lifter, and if you are training on the three Olympic championship lifts, take my advice and don't combine 10 to 15 body-building and muscle-developing exercises with training for the press, snatch, and jerk.

Body-building exercises are fine and I am all for them but after you have obtained a well developed body and decide to go in for weight lifting, forget all the monotonous exercises and just lift, Lift, LIFT! You possibly could do a few squats and fast dead lifts, but not too many of them.

Muscles play an important part in weight lifting no doubt, but perfection of form on the lifts, timing, balance and direction are also very important, as well as tremendous concentration and nervous energy.

Now just why am I against combining weight lifting with repetition body-building and muscle-developing types of exercises?

Let's go into a short discussion of the muscles and I think you will understand why I am opposed to mixing two types of physical training, or rather mixing physical training exercises with training for an athletic sport.

The muscles are the bulky parts of the body which cover the bones and have the greater part in giving the figure roundness and contours. I'll agree that you can't have a fine build and a "shape" to your body if your muscles are not fully developed. What happens when your bony framework goes into action? The skeletal muscles do it. Yes, it is the skeletal muscles which change the passive apparatus of bones into a moving structure of progression and movement. To what do they owe their power? To the contractile quality of their fibers. Most of the muscles that move the bones are elongated (stretch out) with the middle section of fleshy fibers, the "belly" and with one or both ends tendinous. One end of these muscles is attached to a point called the origin and the other to another point called the insertion. It is not always possible to make a distinction between an origin and and insertion. The origin is generally that part of a muscle which remains more or less stationary during action of that muscle while the insertion is on a part that is moved by the active muscle. As a rule a muscle is attached to a bone by a tendon but sometimes the fleshy fibers are joined directly to the surface of a bone.

Muscles pass from one bone to a succeeding or an adjacent one. Some limb muscles go to the second succeeding bone; that is they skip one bone and pass over two articulations, or movements.

Tendons are another part of your anatomy which you should know about. They are the cords or bands of dense tissue terminating the muscular forms. They are like cords, and close to the skin, they show as sinewy prominences. A good example of this is on the front of the forearm, close to the wrist, and on the back of the hand, especially in thin persons, or those very muscular.

A muscle is a bulging mass, and the more our muscles bulge the better we like it! And what muscle of all muscles are the weight training boys forever trying to make bigger and bulgier? You guessed it, the biceps muscle! I like to see a good bicep on a man as well as the next fellow but I don't think it is the most important one and that more time should be spent on it than any other muscle or group of muscles. Any average man on the street knows about the bicep muscle. Just stop and ask the first one you meet, "Let me feel your bicep" and see if he does not flex his 'baseball' shaped muscle as hard as he can .You probably know that the bicep's fleshy fibers, when contracted, draw up the forearm toward the shoulder. The one or two arm curl uses the bicep muscle fully. It has two origins beneath the shoulder muscle mass; while below, one tendon goes to the radius and another one expands into an aponeurosis that is merged with other membranes of the forearm.

Now why have I mentioned the biceps muscle in this discussion? Muscles are nearly all arranged to have other muscles as antagonists! You know what an antagonist is, don't you? Well, when the fleshy portion of the bicep swells out to move the forearm a muscle on the back of the limb (the triceps) relaxes its fibers. And when the triceps straightens the arm, and proceeds to pull on the forearm, the biceps in its turn relaxes. Other muscles take part in the movement; but this particular case of which I mention is one of the less complex and a fitting example to illustrate the principle of antagonistic muscles.

Are you beginning to see the logic of my training methods of not combining weightlifting proper and bodybuilding and muscle developing exercises? In exercises like curls, pull overs, lateral raises, and many others found in the average muscle developing routine, you are absolutely tying your muscles up,  tiring them out, and while you may be developing your muscles and  becoming a muscular prima donna, you are retarding your progress as far as weightlifting ability on the press, snatch, and clean and jerk are concerned.

If you are interested in exercising with weights and have as your objective a well-developed, healthy, strong body, and do not care to become a champion weightlifter in your own community or state, that is perfectly okay, but I have known of many fellows who combined the two types of training and could never understand why they did not improve past a certain point on the poundages of their press, snatch, and jerk. It is not difficult to understand, if you understand that in doing the three Olympic lifts you are using mostly the extending muscles, while in body-building routines it is just the opposite, you are using the contracting muscles almost exclusively.

If you are desirous of becoming the best weight-lifter your physical build, leverages, and strength potential are capable of, don't worry how large your arm is or how shapely your legs may be, but concentrate instead upon your training on lifting.