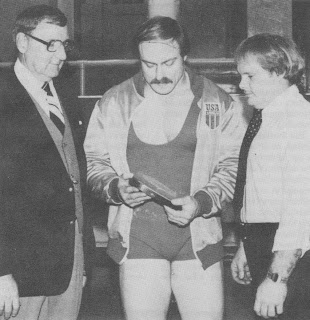 In previous articles I have taken the reader from the beginning stage of training to the point where he is ready to concentrate 100% on powerlifting. We have worked our way through the building and learning stages and we are now ready to begin thinking of competitions, records and advanced training.

In order to get to the top in any sport you must be willing to pay the price. Don't think these records or championships come easy. There will be many setbacks and disappointments along the way. Many will fall by the wayside, but the ones who are able to pay the price will be rewarded.

The following discussions are for the advanced lifter; only those who have a solid base should follow programs such as these.

We will begin with the squat since it is the first lift of competition.

Of the three powerlifts the squat is the most difficult to do in a contest. The lift entails so many aspects. Wraps must be applied; the lifter must adjust under the bar, walk backwards and set up; wait for the official's signal, perform the actual squat, wait for the signal, then rack the weight. Quality squatting equipment is expensive and cumbersome. The extra detail of setting the bar to each lifter's height uses valuable time. Because of the very heavy weight now used and the way the lift affects the lower back, hips and legs, there are many injuries resulting from the squat. The squat also requires the most athletic ability of the three powerlifts. It is difficult to judge for depth and form resulting in much controversy. Spotting the lift is difficult and dangerous for spotters and lifters alike.

Squatting has some drawbacks, but it is one of the very best and most effective developers of power in the lower body. The squat demands high concentration if a lifter expects to be successful in doing it. Like the deadlift, the squat involves the use of many large and powerful muscles. Squat training takes a lot of hard work. The workouts are heavy and repetitive. Unlike the deadlift, the squat can be trained harder and heavier for longer periods of time before a state of overwork is approached. Most lifters train the squat twice per week with two or three days between squat workouts. One workout is designated the heavy day, with three to five sets of heavy doubles and triples, or fours and fives with lighter weight lifted. There are big differences in all of us, and individual training requirements often differ among individuals. It takes years to know your body and the training that works best for it. LEARN A LITTLE FROM EVERY WORKOUT.

Some lifters naturally have the right body structure to be powerful squatters. They possess short legs, wide hips, thick abdominal structure, short stature and thick limbs. If you do not have it naturally and want to excel at the squat you will have to make some changes in body structure. An increase in bodyweight will better your squatting leverages. Stronger and  bigger thighs, calves, and abdominals are important squat builders. As an example of how bodyweight helps the squat - I remember before I bulked up to superheavyweight I was squatting a marginal 700 lbs. at 242 bodyweight. I took 18 months to reach a bodyweight of 330. During the eighteen months I did a single rep at the end of each workout. Each week, for 72 weeks, I added 2.5 lbs. to this single without fail. By the end of 72 weeks I was doing a  training single of 875 lbs. Every training squat I did in those 18 months was easy and I did not miss one single training rep. For every 5-lb. increase in bodyweight per month my squat jumped 10 lbs. There were no tight suits, thick belts or good knee wraps at that time either. I think that says a lot for bodyweight's positive effect on squatting leverages.

Personal equipment is one more way to increase squat poundage. A good suit, thick belt and Dyna Wraps will add many pounds to the lift.

Beginning lifters should not use equipment until they reach the advanced stage. High levels of real strength should be developed without the aid of personal equipment. During the lifter's initial years the weights should be felt and learned through the unrestricted movement of each lift. This is impossible when the new lifter is tightly bound in wraps, suit and belt.

Because it is possible work the squat more often than the deadlift, the squat is worked twice per week. A sensible schedule for squatting that least affects the two other lifts and is least affected by them must be devised. There are different possibilities for setting up your squat training and training in general. These possibilities are governed by your work schedule, recuperative capabilities, lifestyle and the schedule of training partners.

Here is one method that is flexible and provides rest between heavy workouts. Do not follow it word for word unless you find it acceptable to your training. Look it over, try it, then make the changes necessary to bring it into accord with your body.

It looks like there is a lot of time between workouts. If all we did was powerlift, that would be true. This, however, is only the powerlift schedule. On heavy days and off days there is bodybuilding to do. Assistance work, abdominal work and stretching must also be done.

There is a theory that a lifter should train the squat without a tight suit, belt or wraps; then shortly before the contest resume their use. It is felt that training without gear will increase squatting poundages, because the body must work harder without it. Training without gear will increase squatting poundages, but it will not be to the lifter's advantage if this practice is continued too close to a contest. It takes two or three weeks to readjust to equipment. Two, three, four or even six weeks before a contest is a critical time. The lifter might be hitting the peak, fixing a depth position in the mind, or evaluating present strength with the day of contest strength. This is not the time to be falling forward or not going deep enough in the squat. Begin training with the exact equipment you use in a contest three months before the contest. Remember: train as you perform.


Cutting down to 242 lbs. from superheavy was traumatic  to my squat. While reducing bodyweight I could feel the squats getting heavier day by day. When I arrived at the 242-lb. bodyweight I had less strength than I had before I gained all the bodyweight. My choice of routine was influenced by the fact that I cannot do many reps without sooner or later getting a lower back injury. The new routine had to consist of sets of low reps. I build my routine around three to four heavy sets of two and three reps. I trained two days a week, one heavy day and light on the other. The heavy day had the four sets of three or two reps with a heavy weight. A heavy day went like this -

I always have a single worked into most of my routines. It is not a maximum attempt. It serves the purpose of keeping attuned to heavy singles during a time when reps make up the majority of training. My squat assistance work was not too extensive, although I did loads of heavy bench squats during the early years of my lifting. Leg extensions and leg curls are the only assistance work I have done since 1974. I use the close stance, high bar style of squatting. The only place I ever encountered a small sticking point was from three-fourths of the way up to lockout. It was easily overcome by doing leg extensions and leg curls and from strength gained over the years doing the regular squat.

The squat has given me more upper and lower back injuries than the deadlift. If I kept the reps low, I avoided injury. The weight never seemed to cause the injury, only the amount of reps. I never injured my back with a heavy single, however, I have injured it countless times with rep sets. Another place I have run into back problems was when I took the bar off the rack and walked backwards or forward to return the bar. When you walk with the bar abnormal stresses are placed on the back every time one foot leaves the floor. All the weight is concentrated to one side and throws the back out of balance. Stay close to the rack, take a minimum amount of steps and drag your feet. Never completely take the weight off any one foot.


Since I have training 100% drug free I have adjusted the previous training method slightly. I won't get into the philosophy of drug free training as I have covered that in previous articles.

The biggest adjustments I have made are that I don't go as heavy so often and I have cut the reps back a little more. The recovery period is longer so the real heavy days have to be further apart. A heavy day might go like this:

I have found this low rep system to work extremely well and I should do over 850 in 1986.


Lifters who use the wide stance, bar low on the back style squat usually encounter a sticking point from below parallel to a few inches above parallel. A strength deficiency in the quadriceps is the cause. Another frequent sticking point for the wide squatter is a few inches above parallel to completion. The lower back and hips are heavily involved at this position, so they would need special work.


The preceding has been a fairly thorough discussion on my theories and philosophies concerning squat training. The number one key to success is HARD WORK. The best routines in the world won't help if you don't work hard enough.

Good luck with your training, and
may all your lifts receive white lights.