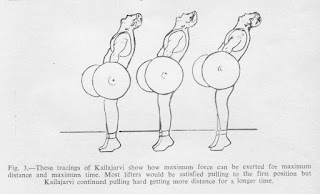 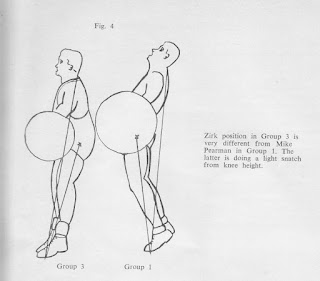 A full extension in necessary not only for working muscles in their inner range, etc., but also to make full use of IMPULSE. The speed of the bar does not depend only on the amount of force applied but also upon the time for which it operates (its IMPULSE).

This is another reason why caution must be observed when comparing times of various performers during the pull. One lifter may be faster than another in the second stage of the lift only because he has not extended as fully as he ought to. This is a fault which at first sight would not be apparent and actually the relative time would look good on paper. 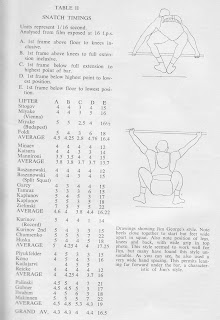 
The average speed of those timed in this phase (see Table 11) was just over 1/4 second. Garcy and Tamraz were fastest and Palinski slowest but without the reader knowing all the facts regarding time and distance it would be wrong to draw conclusions. For example, Tamraz did not do a complete extension and therefore did not move as far as the others.

It is suggested that in a good lift, the pull of the bar from the knees to the top of the pull MAXIMUM force should be applied for MAXIMUM distance and time. This last factor (maximum time) is apt to be misleading.The movement should be as fast as possible but force applied for as long as possible.

Sometimes hip thrust and body extension is completed after the feet have left the floor - THIS IS WASTEFUL AND INEFFECTIVE. Power comes from the ground, and when the feet leave the floor, the flight path of your combined center of gravity is already determined and whatever movements you make while in mid-air will not affect it.

Around 40 lifters were examined and, being top men in world competitions, most of them were squat stylists.

The position traced was the position of full extension before either foot broke contact with the ground. If the feet remained in contact during a squat, then the maximum extension position was used. Two lines were then drawn:

Line 1: From the center of the base to the hip joint (approx.).

Line 2: From the center of the base to the curve at the back of the neck.

In order to get a rough estimate of the position of the center of gravity and for other comparisons, the AVERAGE ANGLE of Line 1 and Line 2 was calculated. Obviously with Group II this was not necessary. The resulting figures are shown in Table 6. 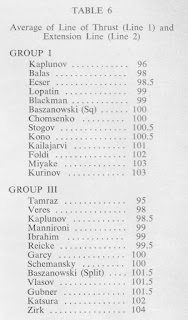 This shows that the amount of hyperextension is not so great as many people imagine and secondly the combined center of gravity of the bar and body is not so far forward as it first appears. Table 7 gives an analysis of the lifters mentioned earlier. We again emphasize that the AIM should be to get the body extended as much as possible and the personal center of gravity traveling rapidly forwards and upwards prior to moving below the weight.

When in a comfortable standing position with the arms hanging at the side, the subjects personal center of gravity is at the level of the first three sacral vertebra. This is the location to which reference is made but naturally the center of gravity shifts as movement takes place. For example, it will rise as the arms are lifted and can even move outside the body mass if the subject bends forward from the waist and pushes the hips backwards.

The position of the combined center of gravity will be somewhere between a line from center of bar to floor (90 degree angle) and the lifter's personal center of gravity, but for the purpose of discussion it is thought that the figures in the average column will give a near enough position.

THIS POSITION OF MAXIMUM EXTENSION IS ALL IMPORTANT.

The action of the head should not be overlooked although only about one-thirteenth of the total bodyweight, its position at the end of the spine can have a considerable effect on the body. The head is truly the rudder of the body.

Although the combined center of gravity is over the base, the line of action can be changed by the line of thrust. This is diagonally indicated by a line from hip joint to heel or hip joint to ball of foot as the fulcrum. Whether to ball of foot or to heel seems to be a debatable point. In any case the direction of travel can be judged by plotting the downward pull of gravity, combined with the eccentric thrust, giving the reaction. See illustrations.

Next: Parallelograms of Force and Transference.