Escer of Hungary demonstrates a style of pressing that is very rarely seen in international lifting competition - a press with no initial heave and no excessive back bend. Note that the bar is held with the wrists back and the elbows fairly high, in contrast to the form used by Baszanowski above. The elbow and wrist position compares with the position of these body parts on Golovanov (next) of Russia. This is the initial position that lifters using the knee kick employ, although Escer does not use such a style but, instead, drives the bar from his chest with arm and shoulder power.

Golovanov of the USSR relies upon his extremely fast and deep backbend to press world record poundages. He uses a very fast start that includes very little body motion. However, he bends back quite far but with such speed that it is hard for the judges to realize how far he went. This press with 369 was turned down, but his world record with 363 was almost as bad except that he recovered quicker from the backbend thus making the lift look better than it actually was. Any way you look at it, 369 is a heavy weight to be pressed overhead in any style by a mid-heavy.

Norbert Schemansky used a style at the 1964 Olympics that is fast becoming the style of many European lifters. Note that Ski does not bend back to far at the start of the press, but after the clap from the referee he lets the bar sink into his chest as his body sags. He then straightens his body and knees quickly to drive the bar off his chest, and then backbends to keep the bar moving past the sticking point. Note that there is little backbend during the lift, a factor that helps get white lights in international lifting, as does the quickness with which the bar travels. 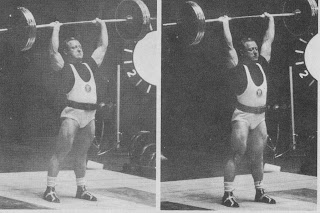 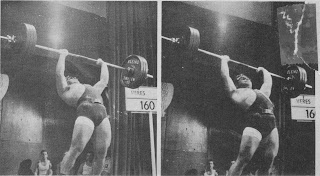 Veres of Hungary uses a similar style to that used by Schemansky except more extreme in every respect. He allows the bar to sag after the referee's clap as Ski does, but look at those knees. And, look at that backbend. Although he missed this weight backwards (last picture) it was generally agreed that the lift had a good chance of being passed if he had been able to hold it for the clap.


As you can see, when exhibiting maximum strength each lifer determines and perfects a style that suits his physical makeup as well as passes the judging of the time. So too, bodybuilders of experience can be seen to vary performance of their exercises to achieve a  specific end result. To many, especially those with untrained eyes, a lift is simply a lift, and an exercise is simply an exercise. This individual art of digging deeper into strength lifts and/or bodybuilding exercises can take decades to realize. Best on your journey!