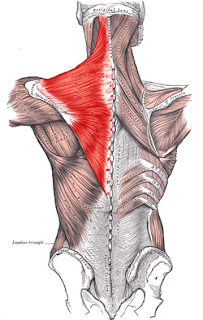 
Developing the Trapezius
by Peary Rader (1946)


The trapezius muscle is often neglected by many weight men who fail to bring it up to ultimate development by proper exercise. Its full development is a necessity for a complete physique, and a lifter would be lost without this muscle developed to its maximum strength. Fortunately for both lifters and bodybuilders this muscle is brought into great activity by exercises for other muscles, and like the other muscles it has many different actions and does not work alone, but is always working in conjunction with many other muscles.

We have shown many photos in the past of men who had wonderful development of this muscle, and of course will show many more to come; however, we want you to note the development of Henry "Milo" Steinborn for a moment. Also notice the back pose of Alan Stephan who has excellent development of this muscle as well as very good definition and separation. Both these men have done considerable lifting and were good snatchers. The Snatch works this muscle very vigorously and likewise a man must have strong traps to succeed with a good snatch. Repetition snatching from a dead hang for an entire afternoon will put this truth firmly in your memory the following day or two!

Before going any farther with this discussion, let's look at the illustration showing this muscle and others of the back. You will note that the trapezius is a big triangular muscle and covers the upper back and part of the neck. It arises from the superior curved line of the occipital bone (lower rear part of the skull). Also from the ligamentum Nuchae and the seventh cervical vertebrae, and all twelve of the dorsal vertebrae. It is inserted (attached) to the clavical (collar bone) and the spine, and acromion process of the scapula (shoulder blade).

Now, as we have said, the trapezius of course does not act alone, so we will note a few of the other nearby muscles. On the right we see the rhomboideus major and minor muscles that are likewise attached to the vertebrae and the shoulder blade. Note how carefully they are placed. Also just above these muscles you can see the levator anguli scapulae. It arises from the transverse processes of the four upper cervical vertebrae and has its insertion in the upper and inner corner of the shoulder blade. (We use the common names for muscles and bones as much as possible to simplify the explanation.)

Anatomy texts can vary in their description of these various muscles; however, let's study them as we can see them. The trapezius will pull the head back as can be seen. It will also pull the shoulder up as in shrugging the shoulders. The middle and upper portions will give you that strong second pull in the Snatch and Clean. It also aids in supporting heavy weights in the hands. Likewise, the small muscles shown at right that lay under the trapezius will aid in this effort.

If you remember your study of the deltoids, you will know that the shoulder blade must rotate when the arm is raised from the shoulder height to overhead. Now you can see that the lower portion of the trapezius can somewhat aid in this rotation by pulling down on the shoulder blade in the first part of the action. This lower part also acts strongly with the latissimus in shrugging the shoulders down. You will also note that the trapezius muscles draw the shoulder blades toward the spine. Now list the lifting movements that correspond to these actions and you begin to get an idea of the importance of trapezius strength and development to a weight man.

These are only a few of the actions of the trapezius, but they are the major ones. All of you are familiar with the muscle control stunt or pose wherein a man rolls his trapezius muscles into large bunches until they almost touch the ears. These little muscles on the right have much to do with this in that they help to pull or rotate the shoulder blade up so they push the trapezius up high. Then the performer pulls the head back slightly and thus contracts the upper part of the trapezius into huge bulges of muscle on each side of the neck. I suppose I could have just said "most muscular" but hey, it's 1946. And besides, TV isn't really a big deal yet, let alone The Incredible Hulk series. Let me get this right. Decades from now there'll be a popular show that features a bodybuilder painted green, and this show will further the popularity of weight lifting? Sure, pal, if you say so.

You will also note that around the spine in the upper portion there is a large oval space where the tendon widens out. it is this tendon that creates the hollow space as shown in the photo of Steinborn. The muscular tissues when contracted bulge up around this part of the tendon.

Your greatest interest will of course be in the exercises and sports you can use to develop your trapezius to its maximum size and strength.

In the realm of sports there are few things one can do to create maximum development. Wrestling will cause considerable development of this muscle - especially in the upper portion that is worked by movements of the head and neck. Rowing sports are very good for this muscle. Likewise, the weighted throwing events will cause considerable development. Most other sports make some use if this muscle but in movements too light to develop it to any great extent. All forms of gymnastics will effect it to a certain degree.

As we have said before, of all sports or exercises weightlifting is the most effective method of developing this muscle - especially in its upper and middle portions. If you will notice the lifters at any contest you will see well-developed trapezius muscles in every weight category almost without exception. You will realize the effectiveness of this type of exercise if you will do a few heavy cleans - especially in the dead hang position, when you are not used to it. Your greatest soreness will be located in these muscles. The same is true of the dead lift, with one or two hands.

Even tho you are a lifter it is still well that you give some thought to further special work for these muscles as it will well repay you in the extra pounds you will lift. If you are a bodybuilder you should give still more thought to these muscles since you will be lacking and incomplete in development here if you do not and it will certainly spoil your physique.

One of the best exercises for this muscle is the common shoulder shrug know to most all exercisers. It is very necessary to perform it correctly for real benefit tho. To do this, hold the barbell or dumbbells in the hand, bring the shoulders forward and lean the body slightly forward. Then raise the shoulders upward as high as possible, then roll them back as far as possible while keeping them high. Now, while holding them back allow them to come down and I mean clear down.

In order to work the middle and lower portions more thoroughly you should perform the same shoulder movement while in the bent over position as in the rowing motion. In the future this will come to be known as one of The "Kelso" Shrugs, so I'm told shortly before falling into sleep some nights. Always leave the arms straight in both exercises. You will be able to use very heavy weights in these two exercise movements due to the great power of these muscles and the short range of motion.

Another very good exercise is the regular rowing motion. For trapezius development you should pull the weight to the chest at about nipple height. This makes it a strong exercise for this muscle. In lowering the weight you should let the arms stretch far down and hump the back for complete extension of the trapezius muscles, and naturally, there will be a different poundage used than with your normal bent rows. Lateral raises in the bent position are likewise good. If you are the possessor of a cable set you will find that the regular front chest pull with straight arms is also a good exercise for these muscles.

You will find that this muscle can stand a great deal of work without going stale, and that it will respond very fast to heavy exercise. For this reason very few or our readers should have difficulty in developing this muscle to satisfactory size/strength and beyond.

It will seem that we haven't followed our regular practice of giving a lot of exercises for this muscle but we have given you the best ones and others that we might give would be duplications of what we give for certain other muscle groups, for as we have said before, many other muscles work in harmony with this muscle.