How Much, How Often / The One Hand Snatch - Jim Halliday 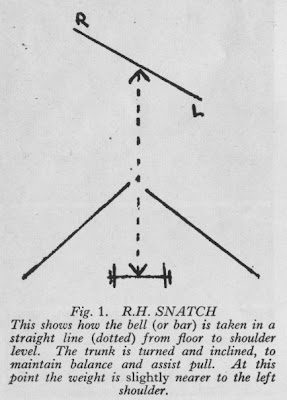 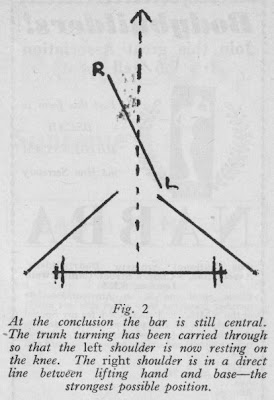 There is one question asked that never seems to get a satisfactory answer. Because of this its importance is not always recognized by the novice and this often results in, at the very least, a lot of wasted effort.

I am speaking about the amount of training that should be done. In other words – how much, how often.

This, again, must be considered from the individual point of view. It is impossible to lay down a set standard of exercises, reps, poundages, training times and the number of sessions to be done that could apply to all.

Not only must poundages vary according to the man’s capabilities, the number of reps and sets must be calculated to meet his physical requirements, and the duration and frequency of his workouts must comply with his natural energies and powers of recuperation.

Some people progress more using high reps and lower poundages, others with very few reps and relatively high weights. Some can train better by doing a short workout daily, many find a full session three times weekly is the best method for them.

The ideal for each individual can only be found as a result of experiment, although there are certain points that can basically be applied in every case.

As far as reps and sets are concerned it must be remembered that you get out of training what you put into it. A program consisting of high reps and light weights (disregarding, temporarily, the bodybuilder’s point of view) will enable you to eventually do a lot of reps, with light weights! You will have built up staminal powers, but not ability to handle heavy weights. Alternatively, the man who does a lot of “single” type training will be able to lift a heavy weight but will be hopeless at repetition work.

I know a lifter who can perform ten presses with a certain poundage, but is unable to handle an extra 10 lbs. for a single rep. On the other hand, when I was training, I did a lot of singles, and any weight I could press twice was at least 10 lbs. below my single limit.

This question of reps and sets, as I said, is a matter of individual requirements, and the foundation of a routine to suit these requirements is largely a matter of experiment.

For general purposes I would suggest a mixed schedule of heavy and light movements, keeping the reps within a certain range. Enough reps to ensure a good workout, but keeping the number below that at which boredom becomes a likely possibility.

As for the duration of the routine, this can vary from day to day, and, of course, as the performer becomes more proficient. It is best, in the early stages, to do too little rather than too much. The lifter should be aware of some facts that determine the amount he should do.

The frequency of the workouts depends upon the way the man recuperates from his efforts. Normally the sessions take the form of working out three or four times weekly, but it may be found that spreading out the work and doing a shorter period daily, enables the lifter to work better.

Immediate signs of fatigue from training, and these are normally expected, are as follows. An increase in respiration with a slightly raised pulse rate and a slight pallor of the skin. Some loss of appetite and muscular coordination. This should disappear soon after training is completed. If it persists, the endeavors may have been too prolonged.

Sure signs of overtraining over a lengthy period are denoted by a change in the disposition. The person becomes more morose and irritable and often loses concentration. is appetite suffers permanently and he shows lack of interest and enthusiasm.

Any symptoms like these being noted, all other aspects being normal, the lifter should modify his routine immediately.


The One Hand Snatch

This lift, from a performance point of view, is on of the finest, both for lifter and spectator, and I first offer some advice for those who may tackle it as a competitive lift.

Three points that help, once the rudiments of style have been mastered, are as follows:

1.) Keep the bar as close to the body as possible. This is essential. Any outward swing not only means a loss of vital power, it also means that the final position will be wrong and this lift calls for perfect balance at its conclusion.

2.) Use the disengaged arm to assist in the initial pull. When the legs are bent, put the hand on the knee and push strongly as the pull commences. This also has the effect of assisting to maintain the balance during the first half of the movement.

3.) If the pull is correct the lifting hand should be directed towards the opposite shoulder. This does not mean that the bar moves in any direction except a straight line. It implies that the body should not move away from the lifting hand, but should be kept in the same position, merely turning slightly to facilitate the proper action.

Other points to note – The body and head should be perfectly upright at the commencement. Full use of the legs should be employed in the initial action.

On the surface, this lift does not appear to have a lot to offer the bodybuilder in any special sense. I would like to point out, though, the all-round ¬developing possibilities of this movement and the fact that it can be valuable in demonstrating the lifter’s power.

It would be entirely advantageous for the bodybuilder to learn the lift correctly and to practice it, but for the man who is only interested in muscle-building, there is a modification that can be of great benefit.

This is to do only the first half of the lift – from floor to shoulder height – using a dumbell to facilitate proper action. The movement is exactly as in the full lift. Commence with the dumbell in between the feet and pull it chin high, the weight travelling up in line with the centre of the body, which is slightly turned as the exercise concludes. This is comparable to the Upright Rowing movement and actually has certain advantages over the more common exercise, the use of the dumbell allowing for more concentrated efforts.

The lifter, who wishes to go for high competitive poundages, must necessarily do a lot of singles in his training.

The best method is to release the bar following each attempt, assume an upright position, then again adopt the proper commencing stance after a brief pause. Doing this ensures the commencing position is always correct.

Once the lifter is proficient and has developed a proper style, I suggest he does 3 sets of 5 reps in the manner stated.

The bodybuilder, using the modified dumbell version given above given above, could do the usual 3 sets of 6 reps each hand.

The performer can then arrange his routine on the following lines. 2 sets of 6 reps on the modified version; 6 single reps on the lift proper.

If more attention to the lift is required, the performer could do the movements on separate training sessions, thus being able to do a greater amount of work on each.