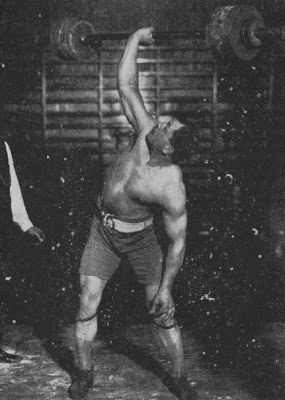 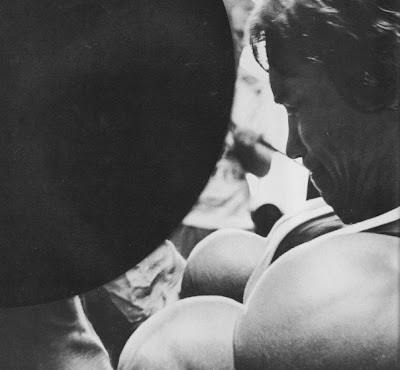 The Muscles of the Arms and Their Functions

The full nave of the biceps is biceps brachii, which in English means “two-headed flexor of the forearm.” That is, the function of this muscle is to bend the arm at the elbow, to bring the forearm and upper arm close together. In performing this function, the muscle shortens its length and therefore becomes thicker and more prominent. In a well developed biceps this results in the characteristic bulging of the upper part of the arm, commonly regarded as an infallible sign of strength.

While everyone has heard of the biceps muscle, comparatively few know of the other chief muscle in the upper arm, the triceps, located on the back of the arm. The triceps, triceps brachii, meaning “three-headed extensor of the forearm,” works in opposition to the biceps, its function being to straighten the arm. Besides these principal functions, of bending and straightening the arm, respectively, the biceps and triceps muscles have other functions. The biceps acts to supinate the hand; that is, to turn the hand over so that the palm is uppermost. One of the three heads, or portions, of the triceps – the middle or long head – in addition to straightening the arm also draws it backward, as in the pull of the arms in rowing.

In the forearm there are twenty-two muscles and in the hand eighteen. A description of each of these would probably be only confusing to the reader, and of little practical value. To most persons, the technical side of anatomy is a dry subject at best. Nobody carries around in his head the names and functions of all the muscles in the body. We are aware that even in our present object of furnishing the reader with a practical working knowledge of the principal muscles in the arms, we may be presenting information that is uninteresting and tiresome. We can only endeavor to make it as brief and concise as possible in hopes that, in developing his arms, the reader knows the movements that being into action any chosen group of muscles.

A simple method of determining which muscles come into play in a given exercise is to perform the exercise and while doing so have a fellow-exerciser note the muscles that contract or harden. In most movements the performer can easily tell which muscles he is using. Again, when a goodly amount of exercise is taken to which one is unaccustomed, the soreness felt in certain muscles the next or the second day following is unmistakable evidence of which muscles have been worked or are not familiar with such work.

A rule that the student will find helpful in determining the action of muscles is, that a muscle always pulls, never pushes, the bone which it moves. Thus the arm, for example, could not possibly be bent by the triceps on the back of the arm, not straightened by the biceps on the front of the arm; for to allow of either of such actions the muscle would have to perform the impossible function of pushing the bones of the forearm. This rule of a muscle exerting its power through contraction, or shortening its length, thereby bringing its points of attachment (to the bones) closer together, applies throughout the body.

Another law of body mechanics is, that the terminating fibers of a muscle (usually a tendon) must cross a joint if that muscle is to act on the bone on the far side of the joint. This necessity will, of course, be obvious to the intelligent reader. But, lest he thinks that we are calling undue attention to the obvious, it may be said that some very extraordinary statements have been made at various times by professed “authorities” on bodily development.

But to proceed briefly with the forearm muscles. The largest muscle on the front or palm side of the forearm, the brachioradialis, works in conjunction with the biceps and the brachialis to flex the arm. On the back of the forearm, a short muscle located just below the elbow, the anconeous, works in conjunction with the triceps to straighten the arm. All of the remaining muscles in the forearm have their action on the hand or fingers. Some of the muscles flex the wrist, that is, bring the hand closer to the forearm on the palm side. Other muscles, located on the back of the forearm, do the opposite, extend the wrist. In addition to flexion and extension the wrist has the power to move laterally, or from side to side. Movement of the hand toward the little finger side is called adduction of the wrist; movement of the hand toward the thumb side is called abduction of the wrist. Then there is the movement of supination of the hand previously stated as being performed b the biceps; the supinator muscle of the forearm is equally involved in this movement, and both muscles are assisted by the brachioradialis muscle of the forearm. The opposite movement to supination – pronation, or turning the palm downward, is accomplished by muscles on the front of the forearm. Lastly, there are the movements of the fingers and thumb to be accounted for. Most of the muscles that have to do with the bending or straightening of the fingers are located in the forearm, although some are present in the hand itself. The thumb in its various movements is acted upon by eight muscles, four or which are in the forearm and four in the ball of the thumb.

The wrist is flexed by a group of muscles located on the inside and inside-front of the forearm. The wrist is extended by muscles located on the outside and outside-back of the forearm. Movement of the wrist sidewise toward the little finger side, or adduction, and toward the thumb side, or abduction, is accomplished by different combinations of the muscles that flex and extend the wrist. Rotary movement of the hand in every direction, or circumduction, of course brings into action all of the forearm muscles, as well as the supinator muscle in the upper arm.

Thus it will be seen that the muscles of the lower arm and hand are considerable in number, largely inter-related in action and capable of producing movements either simple or complex. The fact that in fundamental movements of the arm many muscles may be caused to work together makes it of advantage to develop the arms by exercises of a vigorous character that affect many muscles at a time rather than a few. To adopt this type of exercises holds many advantages other than the saving of time, energy and patience. Infinitely better results are obtained. The arms developed by heavy exercises both look and are larger, stronger, shapelier and better coordinated in action than are the arms developed by calisthenic exercises that bring into action only a few muscles at a time. A most encouraging effect of the use of heavy barbells and dumbells is that the muscles begin to grow larger and stronger rapidly at first. The student is thereby spared the patience-trying ordeal of exercising for months (as he must do with calisthenics) before a perceptible gain in the size of his arms is made.

With these facts before him, the reader should be in no doubt as to the kind of training he must follow if he would reach his individual summit of physical strength and development.