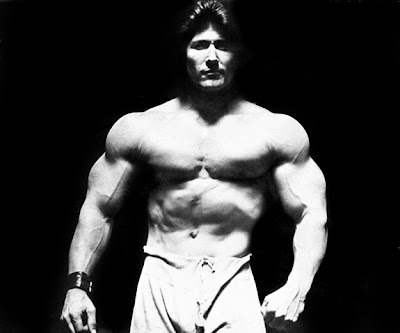 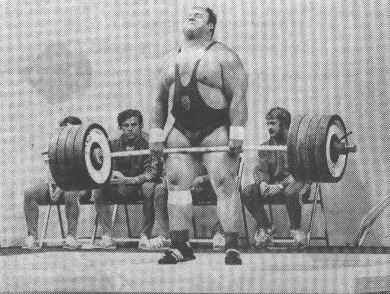 In books which I have previously written, namely “Big Arms” and “The Big Chest Book,” a chapter in each was dedicated to the men who had the biggest arms and the biggest chests. As explained in each of those books it is difficult to obtain accurate measurements of the greatest strength athletes of the past and present. The best chest size might be taken at one stage of life, the arm size at another. For instance, the weight of Louis Cyr varied from 270 when at the age of 18 he first outlifted the strong man, Michaud, to 315 at the age of 23 when he outlifted Richard Pennell, who was considered to be the strongest man in the United States, and later in lift to 365 while still performing on the stage and in circuses. After his retirement he came to weigh nearly 400 pounds. Even the great John Grimek has controlled his weight to a considerable extent. In 1936 when he was the United States Heavyweight champion and a member of the Olympic team, at Berlin lifting the highest official total of any American who contested there, he weighed about 190, in the months after the Olympic games he reached the greatest weight of his career, 230 pounds. At this weight he possessed the very favorable ratio between chest and waist for which he is famed and presented the most Herculean looking figure I have ever seen. Yet six months later we saw him contesting in the national championships held that year of 1937, at , weighing only 176. His weight would go up around 200 but for weight lifting competition he usually made the 181 pound class, as his inseparable companion and great friend, Steve Stanko, was lifting in the heavyweight division. In 1938 Grimek won the championship of North America in the 181 pound class, and competed in that division in the world’s championships in . In 1940 when he won the Mr. America title, and the title of “Most Muscular Man in ,” he had entered the 181 pound class in the lifting, hoisting 285 in a military press, which received unanimous approval of the three officials who were serving. This compared with the official world’s record of 254, but it was found that after weighing in Grimek had eaten, had gained over a pound, and the record did not class as an official world’s record, but it was a marvelous lift, one of the world’s greatest on record. His range in weight from 176 to 230 within a year’s time, 54 pounds in all, would account for a great discrepancy in measurements. Another case is that of a Canadian strength athlete who has deservedly received considerable acclaim for his excellent build, who formerly had been a featherweight (132 pound) champion. Later his arm was reported to have stretched the tape to 16 ½ inches and his weight was still reported at 132 pounds. This did not seem possible to the writer, for others of the world’s best built men of 132 pounds had had arms of 14 inches or less. It was difficult to understand where this man’s measurement could have come from if he weighed 132 pounds, and had good legs as he did. His muscle tissues are probably not very dense to have such large measurements at this bodyweight.

Some men wish to have the greatest possible measurements while others do not consider measurements of value. They are more interested in the appearance and the quality of the muscle, what can be done with it, than with its mere size. Some take a measurement one way and some another. For instance, in the book “Big Arms,” there has been an endeavor to popularize three positions for measuring the upper arm. No. 1. With the forearm at fight angles to the upper arm. No. 2. With the hand drawn back close to the shoulder. No. 3. With the arm at the side holding the wrist of one arm with the hand of the other. When we know in what position the measurement was made, whether it was taken cold or with the arm pumped up, we can compare more favorably. Some use a steel tape and take the measurement snugly, while others use a cloth tape which with constant use has shrunk so that the measurement of the arm is magnified. Some men use a slanting tape for they are so constructed that the highest point of the biceps is not in line with the greatest curve of the triceps. A man with such an arm can not obtain a measurement that compares favorably with those whose anatomical construction places the bump of the biceps above the curve of the triceps. John Grimek is one who has such an arm, and his best measurement will never illustrate what wonderful arms he has. Without exception, when John Grimek, Tony Terlazzo and I made a trip through the West appearing in 24 exhibitions or demonstrations in one month, everyone who saw Grimek thought that he was much more impressive in person than they expected from his measurements or even from his wonderful photos.

In measuring the chest, some men like Arthur Saxon, who did not care about measurements, would be taped in their habitual slumped position and the 48 measurement which resulted would not give a fair indication of the wonderful chest development of this great strong man, the greatest one armed lifter of all time, really possessed. As a contrast, Sandow, who really had a magnificent physique, at times exaggerated his measurements out of the realm of possibility. In one of his books he gave his chest measurement as 60 inches. This was certainly impossible for a man who was five foot eight in height, approximately Grimek’s height, but who usually weighed 180. Weighing 200, the magnificent chest of John Grimek barely places him in the 50 inch class. In Sandow’s book, “, or Man in the Making,” on page 98 it stated that “His chest expansion was also displayed, that portion of his body rising from 47 to 61 inches.” Yet in one of his books, Sandow supplies the measurements of his body taken by the famous Dr. Sargent of Harvard, and the chest girth expanded was given as 46. That is a good chest for even the best built 180 pounder who is 5-8 in height.

Few strong men have much if any actual expansion of the chest. Otto Arco claimed that he had none. If I stand in the correct position of a soldier, my chest is raised and I can not show any additional expansion, the same is true of John Grimek, yet when the chest is contracted and then expanded there can be a considerable increase in measurement. But this expansion is chiefly extension of the muscles, for the well developed chest properly carried is always near the limit of its expansion. John Grimek, one night back stage at one of the York theatres, to duplicate the feat of one of the performers who placed a derby hat under a belt around his chest, and then removing the hat, expanded his chest and his muscles until the belt was tight, was taped with a differential of 14 inches between his contracted and his expanded chest.

So it’s evident that there can be a great difference in measurement of the muscles of various strength athletes. Some pump their arms up by continuous exercise until it is a full half inch larger than normal, some have the faculty of humping their biceps to a greater degree, no one has ever been able to duplicate the biceps development of Otto Arco, which gave him the greatest arm measurement of all time for a man of his bodyweight, and some like Arthur Saxon would half-heartedly flex their arms when someone sought to measure them. For these men knew that measurements didn’t matter, many men have sizeable muscles and can’t do anything much with them. The expert looks for the development of certain muscles, instead of measuring the man whose strength he seeks to estimate.

While there is not quite the possibility of discrepancies in shoulder measurement that there is in arm and chest measurement, the method of standing, of controlling the shoulder muscles, will have an important bearing on the measurement. If a man stands with his arms tight to the body there is less chance to expand the shoulders, for the man with a good Latissimus Dorsi development can carry his arms extended halfway to the sides by tensing his latissimus muscles. Joe Miller (the man who posed for most of the exercises in the four famous York Barbell Courses, was one of the strongest men of his weight in the world, later senior national lifting champion and a member of the Olympic team) early in his career carried his arms this way which made some people believe he was muscle bound (although there never was a muscle bound weight lifter or weight trainee, they are the most flexible of men). In measuring the champs it was found that the shoulder circumference could be increased as much as three full inches by standing with the latissimus tensed instead of with the arms held tight against the body. John Grimek, by controlling the shoulders, could spread them inches wider. So it is evident that it is even more difficult for me to fairly classify Broad Shouldered men than it was to supply a list of Big Chested men and Big Armed men. Partially on account of the difficulty of measuring, but chiefly because measuring the circumference of the shoulders was never a girth which was freely given. I have searched through more than twelve years of Strength and Health magazines which I have right beside me bound in book form. I have looked through the many books in my library to find the measurements of the greatest strong men of the past, I have been in personal touch or correspondence with some of my friends who are acknowledged experts in the world of strength and development, in an endeavor to determine and supply you with information, as authentic as possible concerning the shoulder measurements of the greatest strength athletes, past and present. I am indebted to Ray Van Cleef, Siegmund Klein, John Grimek, and Tromp Von Diggelen of for many of the measurements I am offering. For a decade, Ray Van Cleef has been an acknowledged expert in the physical training field. He is the author of many scientific articles concerning strength athletes and body building. Siegmund Klein is one of the greatest strong men and teachers of all times, for more than a score of years he has operated the world’s finest body building, via barbells, gymnasium, a record holder, the possessor of one of the world’s finest physiques, he lives and breathes strength and muscle. John Grimek’s honors are generally known and have been touched upon in this book. He moulded, from a very ordinary beginning, a physique which is believed to be the world’s best of the past and present. Tromp Von Diggelen, aside from being prominent as a strength athlete himself, is renowned for having been the discoverer of Maxick, the great lifter and muscle control expert of a few years ago, and Hermann Goerner, who has a just claim to having been the strongest man in the world of his time. With the statistics these gentlemen have procured for me, with what my own research and measuring of many of the greats of today have produced, I offer you the following statistics concerning broad shouldered men.

I have compiled a list of over 200 of the best men of the past and the present, in many cases I have been able to obtain accurate shoulder measurements, in others, having the chest measurement, I have estimated the shoulder girth and the shoulder breadth, using a formula that I have devised through comparing the measurements of scores of strong, well developed men.

Above is a list of the vital statistics of some of the most famous men of strength and development of the past and present.