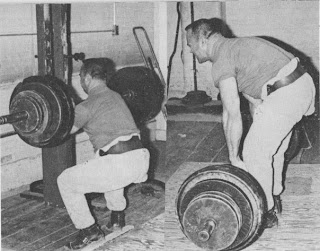 Dezso Ban, a former top European lifter Dezso left one of the Iron Curtain countries many years ago and brought much of the training knowledge with him, including the philosophy of intense, fast workouts.

I first met Dezso Ban some four years, when I joined the Elizabeth YMCA. Immediately I was impressed with his solid, muscular physique and greater all-over body power. Much of what I am going to relate to you here has been gathered by me throughout the years we have trained together. I would say, without reservation, pound-for-pound he is one of the strongest and most muscular men I have ever met and I have seen him lift some incredible poundages with strict, flawless style.

His musculature is truly dense and Herculean. The muscles of the upper and lower back look like thick ropes under the skin, with each massive lump fighting for room to breathe, so densely is he constructed. He has huge calves and incredible lower thigh development with a massive, yet trim hip and waist area with very well developed obliques and a lower back makeup that has to be seen to be believed. But of all his physical dimensions, his trapezius development remains paramount beyond description. When in hard training, his traps seem to have their insertions somewhere behind his ears, so high and thickly dense is their structure. His pectorals and shoulders are thickset and well-shaped and somehow hiding all their inner power. Such is his appearance.

The power this man has developed must be seen by an advanced trainee to be properly appreciated. I myself have seen “Dezzi” shrug 940 pounds for 3 repetitions at a bodyweight of approximately 190. This was two summers ago. He has also stiff-legged deadlifted 550 pounds and had 600 up with a hitch. His personal records in the full squat, Olympic style, are 505x1 and 455x5. He has also seated inclined pressed 255x2.

As far as Dezzi’s Olympic lifts are concerned, I believe he told me he pressed somewhere around 270 and clean & jerked 380-385. I’m sorry I can’t be more accurate but I am going by past conversations so you must bear with me. These Olympic lifts were done many years ago and Dezso is not one to bask in past glory.

He is now 45 years old but, believe me, he has the development, flexibility, energy and power of most men half his age. And even more important than his physique or his training poundages is the nature of his training philosophy, which has made him such an extraordinary physical specimen.

To start with, Dezzi feels the average lifter doesn’t train nearly as hard as he should for proper gains and he uses either weights too light or he goes overboard and uses loads far too heavy to complete the repetitions correctly, so excessive cheating comes into play.

Dezzi’s presses ARE presses. His squats are full and complete, thigh biceps resting on calves, back erect and bar placed high on the neck. All deadlifts are done stiff-legged. Benches and inclines are done with a dead stop at the chest and the bar is pressed, not thrust or jerked to arm’s length.

When competing and in top shape he would train 6 days-per-week on a schedule very similar to the following:

Repetitions would usually be no less than 3 and no more than 5. Rest between sets was only long enough to set weight for the next set or long enough to catch his breath. For legs he did back squats, front squats and lunges. For the back he did power cleans, high pulls, shrug pulls and sometimes hyperextensions or stiff-legged deadlifts. Since he was now using these movements for conditioning as wall as power, singles were used irregularly, whenever the mood hit him, so to speak. Mostly sets of 5 or 3 were done, with no attempt whatsoever to force repetitions. If a set felt light he would add weight and do another set. Also, MANY progressive warmup sets were always used to make sure the muscles were sufficiently prepared so as to insure adequate readiness for heavy sets. A fifteen to twenty minute general warmup period always preceded his training schedule.

It is only a matter of conjecture as to what his total could have ultimately been had he used the drugs available and had he escaped the unfortunate injuries he incurred in later years. Right now, with an injured knee and inner thigh which cramps recurrently, he could easily total 1500 in the power lifts in the 198 lb. class, and remember, he is 45 years old.