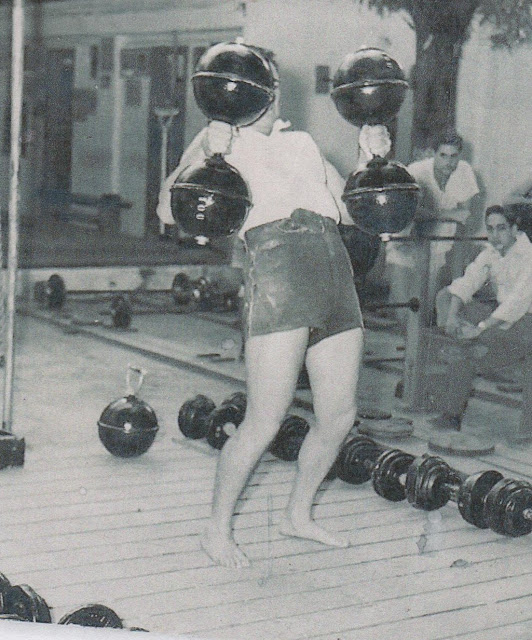 Photo Courtesy of Robert Villar-Kelly
For much, much more, visit:
https://www.ironhistory.com/

Goes great with a cuppa Joe!

Total grip strength is dependent on the strength of the forearm muscles, and the tendon and ligament power in the hands and fingers. It is influenced by proportion and leverage (size of hand and length of fingers) in the lifting of weights with large diameter handles or holding on to the 18-inch upper arm of a strongly resisting wrestling opponent or in wrist wrestling. It is also affected by training for specific types of finger strength, such as raising billiard cues between the fingers, which involves the rarely used adductor muscles of the fingers, or toughness of the hand and fingers in breaking horseshoes, spikes, nails, etc.

What is not generally recognized is that the size of the hands and fingers can be altered, if training of the grip is started early in life. The bones of the hands are endochondral bones, meaning they are nothing more than ossified cartilage. Through use of the hands in heavy labor occupations or by use of the proper exercises, the bones increase in size and strength causing them to grow longer and thicker. It is also well established that tendons and ligaments thicken and grow with use of heavy exercise.

The potentials for the development of tremendous grip and finger strength is best illustrated by the exploits of old-time amateur and professional strong men. While engaging in all types of strength feats, most strong men of that era portrayed their grip strength in the lifting of thick handles weights, barrels by the chimes and other bulky objects. In addition, many specialized on specific kinds of grip and finger strength, such as the breaking of horseshoes, spikes, nails, etc.

Charles Vansittart, "the man with the iron grip" born in 1869, rejected for insurance at 19 years of age, built himself up to a point that few men in history could approach his feats of strength involving the grip and fingers. Extremely slender in build, being 6'3" in height and weighing only 185 pounds, he developed a 17-3/4 inch upper arm and a 14 inch forearm. 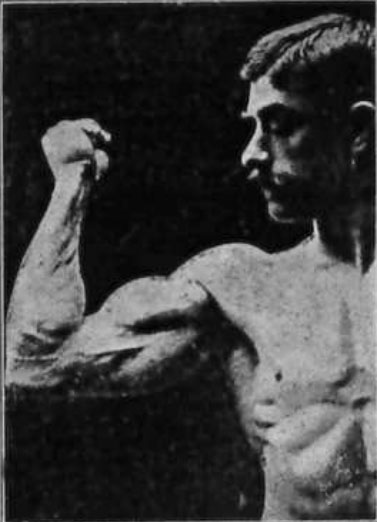 He could tear tennis balls apart, break an English shilling in half and tear apart three packs of playing cards at one time. He could bend a genuine wrought iron spike, seven inches long, 7/16ths of an inch thick, into the shape of a horseshoe with the two ends nearly touching each other. He could grip the tips of six billiard cues between his fingers, squeeze his fingers together, and then raise the six billiard cues to a horizontal position at arm's length in front of him.

Among amateur wrestlers in the post World War II era, none is better known for strength of grip than Dan Hodge, three-time NCAA champion and second in the Olympic games. 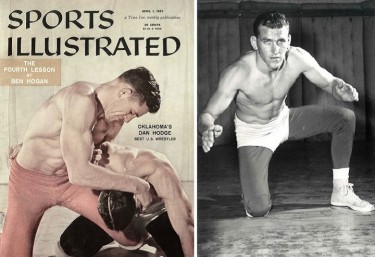 His feat of 20 consecutive pins has never been approached in the history of college wrestling. Hodge had such great strength in his hands he could break a pair of pliers by squeezing them.

Forearm strength is developed by all forms of weight training where the hands are used and by gymnastics, wrestling, and rope climbing. But, to develop a very strong grip requires other specialized methods of training.

Fortunately, most exercises specifically designed for the wrist, hands and fingers can be isolated from general body movements and require little expenditure of energy. Also, the tendons and ligaments of the hands and fingers do not require rest periods as lengthy as those called for after a strenuous all-round strength development program.

Some form of grip exercise can be done five or six days per week. On regular workout days use exercises that work the muscles of the forearm, wrists and hands together, such as various types of curls, chinning, rope climbing, dipping on fingers, picking up thick handled barbells and dumbbells, wrist roller, etc.. On in-between days use exercises such as wrist curls, wrist lever, grippers, squeezing rubbers balls, crumpling newspapers in the hand, pinch grip exercises, etc. Many of these can be done at home.

Here are 28 grip and forearm exercises.

Exercises 1 though 6 are primarily for the wrist and forearm.

Exercises 7 and exercises 10 through 15 are primarily for the hand and fingers.

Exercises 8 and 9 are total arm, forearm, hand and finger exercises.

Wrist Roller. With  outstretched arms, palms downward, grasp the wrist roller, as illustrated, and wind up the plate by maximum turns with the wrists. When the wrist is turned away from the body it develops the forearm flexors (inside of forearm). When the wrist is turned toward the body it develops the forearm extensors (outside of forearm). Roll up weight three to five times in both directions. If shoulder muscles tire, stand on bench or chair with arms hanging down in front of body. Exercises should also be done with elbows at sides on occasions, as illustrated. 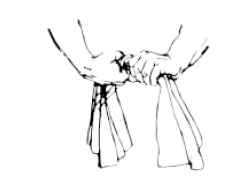 The same exercise as No. 1 done with 10 to 15 sheets of newspapers.

Wrist lever for pronator and supinator muscles involved in the rotation of the forearm. Do exercise slowly with weighted end of bar in a downwards and upwards position as illustrated. Perform 10 to 12 repetitions for 3 sets in both positions.

Wrist Curl. With palms up perform 10 to 12 repetitions for 3 sets. Repeat with palms down (reverse wrist curl). Perform exercise slowly raising weight as high as possible in both positions. 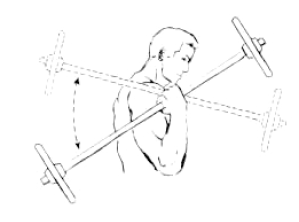 Barbell wrist lever exercise. Control weight as it is moved from lower to upper position on front and back sides of shoulder in alternating fashion. Perform 10 repetitions for 1 set in each position.

Finger exercise. Start with a book of two or three pounds, particularly for the finger extensor muscles (back of hand) which can be strained as they are rarely used in daily life, and gradually increase the weight by the use of a barbell plate on top. The important part of the exercise is the position of the hand at the edge of the table or bench. This should be noted carefully in the illustration as this is a finger exercise, not a hand grip exercise. 10 repetitions each finger. Proceed slowly in the palm down position so as not to strain the relatively weak extensor muscles. 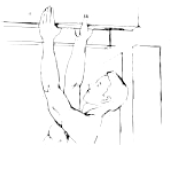 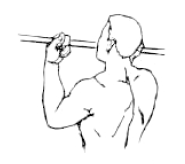 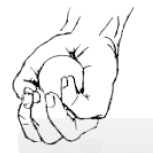 Gripping rubber ball. Practice squeezing with emphasis on different fingers in different arm positions such as the wrist bent downwards or upwards, with arm straight, or bent at the elbow. The ball can be squeezed with thumb and any, one, two, three or four fingers in singles, paired together or total grip combinations. Gradually increase repetitions until 100 or more can be done without resting. 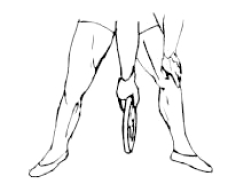 Dropping heavy barbell plates with one hand and catching with the opposite hand. 10 repetitions for each hand. 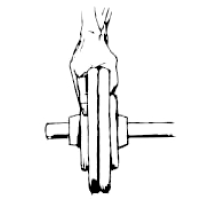 Picking up loaded end of heavy barbell with pinch grip on plates for 10 repetitions.

Picking up loaded end of dumbbell handle for 10 repetitions.

Performing floor dips on thumb and four, three, two or one of the fingers. Weight on fingers can be increased by raising position of feet. Perform 10 to 15 repetitions. 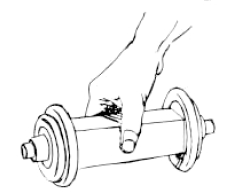 Picking up heavy dumbbell with a pinch-grip wooden block as illustrated. Perform 10 to 15 repetitions. This exercise can be performed with thumb and four, three, two or one finger.

Set out below are non-illustrated exercises, many of which can be classed as single feats of strength, that provide variety in grip strength development. We have mentioned previously the importance of doing ROUND BACK EXERCISES with weights to develop the type of back strength required by the wrestler. To insure that the athlete will not progress too fast in weight increases, and possibly strain his back, construct a thick handled barbell (as described in Exercise 12 which follows). His grip strength will automatically limit the amount of weight he can use in round back deadlifts, etc.

No. 2 - Bending beer bottle caps.
Note: The exercise above must be gradually adapted to. There is a tendency for the novice to empty the bottles too quickly, which can result in sloppy performance when bending the caps, as well as head injury from falling over backward, or forward without putting up the arms quickly enough. As in all exercise, use caution.

No. 6 - Hold a corner of a sheet or two of newspaper in one hand and roll it up into a ball by action of the fingers.

No. 7 - Picking up heavy planks three to four inches in width.

No. 9 - Tearing magazines, telephone books or decks of cards.

No. 10 - Lifting barbells with one or two fingers of each hand.

No. 11 - Alternately dropping a heavy dumbbell with one hand and catching it with the opposite hand.

Trainees should devote some time and attention to the adductor muscles, tendons and ligaments that provide the power to squeeze or hold objects BETWEEN THE FINGERS themselves. A good exercise is lifting a small barbell plate squeezed between two outstretched fingers (of the same hand). Gradually increase the weight as strength increases. These muscles can also be strengthened by squeezing a rubber ball between the fingers.

Holding heavy weight for time is also a good method of strengthening the grip.

Another approach is to perform an exercise for grip development (10-15 reps) and on the last repetition hold the object for as long as possible. The same approach can be used in the chinning exercises.