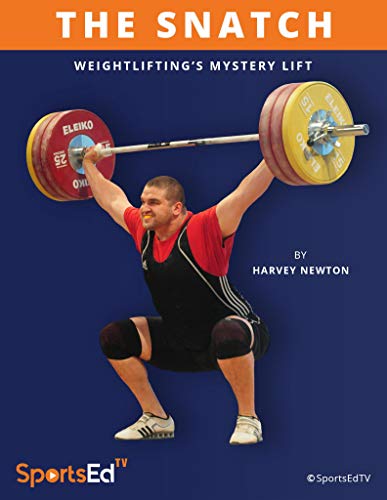 And there's this one too: 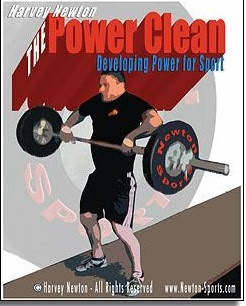 
The teaching of the power clean to beginners should be simple and quick, assuming the athlete does not have any physical disabilities and possesses average motor coordination. The standard method of instruction has been to teach from the ground up, but there are several factors which seem to indicate that teaching the movement in reverse order has more advantages.

Therefore, this article will describe this reverse-order method.

Part of the rationale for using this technique is that learning in the reverse order allows for initial exposure to the most explosive part of the lift, which is also the simplest movement to master. By so learning, the athlete will always be reinforcing those traits learned first and concentration can later be devoted to the more complex middle part of the lift. The final phase learned, that of lifting the bar from the ground to approximately knee height, is again simple and easily learned.

To begin in the traditional manner, one concentrates on a good starting position, however, once the lift commences form is normally lost, body positions change, and the remainder of the power clean is not as efficient as it should be.

In referring to Photo 1 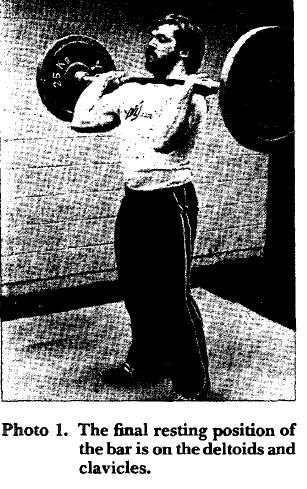 note the final resting position of the bar on the deltoids and clavicles. The wrists are well-flexed and the hands maintain a solid grasp on the bar. This is the only acceptable position for safely holding the bar. It is quite usual to observe the novice, or poorly-coached, athlete with the bar well on the shoulders, but the bar is barely held on the fingertips. This precarious grip is almost always a result of poor wrist flexibility. A concentrated effort at improving the flexibility of this joint will quickly remedy this problem. This same fingertip grip will normally be employed by the same athlete when executing Front Squats, and again, should be corrected immediately.

A second position frequently exhibited by the novice or poorly-coached is one of the bar contacting the chest below the clavicles, with elbows quite low and along the sides of the body. Normally, the upper back will also be rounded. This is a very poor position, lending itself easily to injuries.

All athletes should be taught the proper holding position first. Elbows are slightly elevated (how much depends on arm segment lengths) and pointed approximately 45 degrees to the sides. The bar is secured at the chest by elevating the deltoids slightly. The back is flat and straight, with the bar in line with the body's centers of balance, i.e., hips and feet.


The most explosive part of the lift is the final combined leg and hip drive, along with the shrugging of the trapezius muscles (Photos 2 and 3) 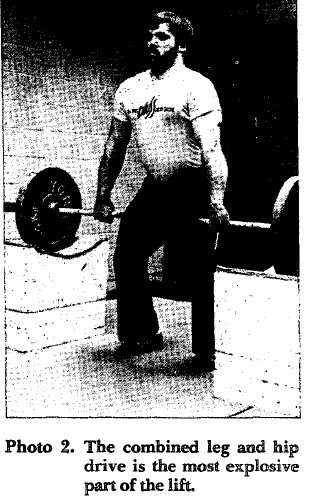 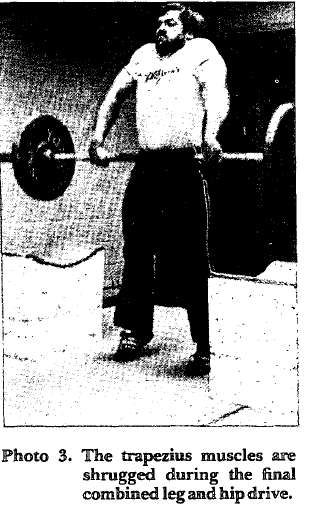 The easiest way to learn this is from blocks on which the barbell plates rest. The approximate height of the bar relative to the standing athlete is shown in Photo 4. 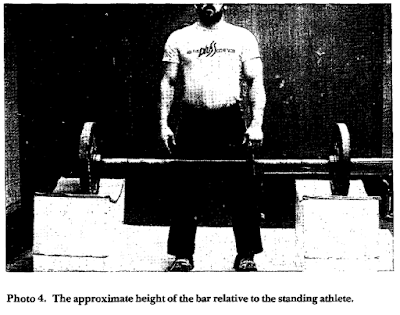 Either the blocks can be adjusted up or down or the athlete can change his position by standing on mats or a small elevated platform. If the latter method is used, be sure this unit is safely constructed and the possible movement of the athlete's feet will not result in any accidents.

Have the athlete bend the knees and ankles so that the knees are positioned over the toes. The hips are located over the heels, the back is absolutely flat, the arms straight, trapezius extended, and the trunk inclined forward at the waist about 10-15 degrees. The balance is located toward the front of the foot, which is flat at this time. Shoulders should appear directly over the bar when viewed from the side. Positions will vary between individuals based on leverage differences.

From this position, the athlete must concentrate on explosively jumping upward. As the momentum created by the hips begins to fade, the trapezius muscles are quickly contracted, which will result in a slight bend of the arms. It is very important that the athlete does not try to now pull the bar higher with the arms. Since the biceps are so weak compared to the legs, hips, and trapezius, it is a waste of time and effort to attempt to pull the bar higher with the arms. What is critical at this point is that the athlete bend the arms as he pulls himself under the bar. This is done before the previously generated momentum fades completely; the bar still moves up slightly, but the main speed movement is getting the body under the bar.

Assuming the elbows have lifted directly out to the sides, the bar will pass very closely along the athlete's torso. When the elbows are seen going backwards, the bar will be further away from the trunk and the usual result will be a swinging motion of the bar, which results in a poor receiving position of the bar on the chest and deltoids. This is another key area where injury can occur because of poor skills or coaching.

After this step has been mastered (usually two to three weeks), the bar is repositioned at approximately knee height. By adjusting the block height or the athlete's elevated position, start the movement as shown in Photo 5. 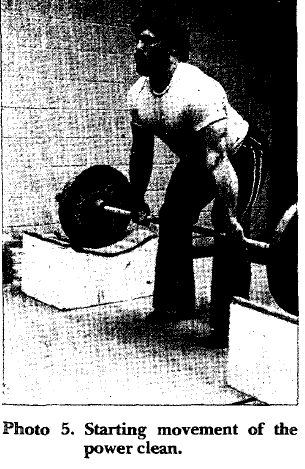 The balance should be approximately in the middle of the foot, as opposed to balance near the front of the foot in the previous high block position and the starting position from the floor. Feet are flat, lower leg just slightly less than perpendicular to the floor, knees slightly flexed, lower back very flat, arms straight, elbows turned out, shoulders ahead of the bar when viewed from the side, head in a neutral position, all your ducks in a row.

The actual lifting is activated by hip and lower back musculature. The shoulders must move straight upward, being sure not to pull them backward. After several inches of lifting have occurred, the knees and ankles are flexed and the hips drop slightly. The shoulders will move rearward, but an attempt should be made to keep them over the bar, not behind it. The bar will lightly graze the thighs, approximately 1/3 to 1/2 way up the length of the femur. The position will be identical to Photo 2, but no blocks will be supporting the weights (Photo 6). 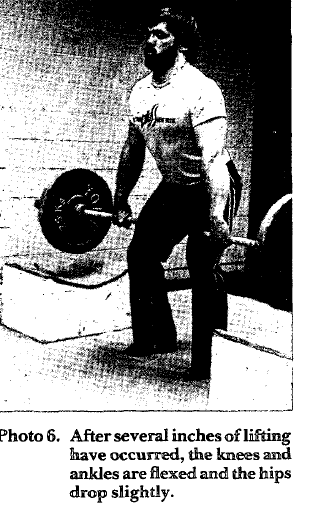 The rest of the lift is executed as previously learned.

This segment of the power clean will teach the natural tendency to lower the hips prior to jumping, whether with a barbell or in a simple vertical jump. The most important concept for the athlete to learn is the shift of the balance from the center of the foot to the front of the foot. 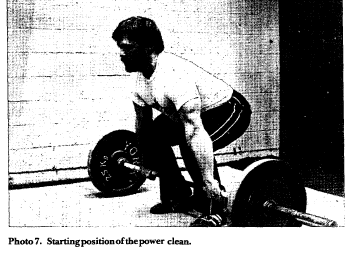 Feet are flat, shank portion of the leg is inclined forward so the knees are approximately over the toes. Depending on femur length, it is generally suggested that the hips be slightly higher than the knees. Center of balance is near the front of the foot. The back is flat, shoulders over or slightly ahead of the bar when viewed from the side. Arms are straight and the head is in a neutral position. By simply activating the quadriceps and hip extensors, the bar is brought off the floor. A slight movement of the bar toward the shins is expected, which will usually result in a center of pressure (balance) change from the front of the foot to the middle. It is more important that the hips move upward only, guarding against the tendency to let the hips move rearward, which would place the center of pressure too close to the heels. This would lead toward a rearward motion of the shoulders and a general failure to execute a vertical jumping motion. One cannot jump upward efficiently when the balance is on the heels.

When the bar approaches the knees, the previously learned low and high block power clean movement is again used.

Depending on the skill level of the athlete, each of these various steps can usually be learned within one to six workouts. One can see how learning the power clean in a reverse order is extremely simple and effective. Along with the actual learning process being worthwhile, the use of low and high block power cleans also allows for increased variation in workouts, something which is critical for the advanced athlete in order to avoid physical and mental burnout.