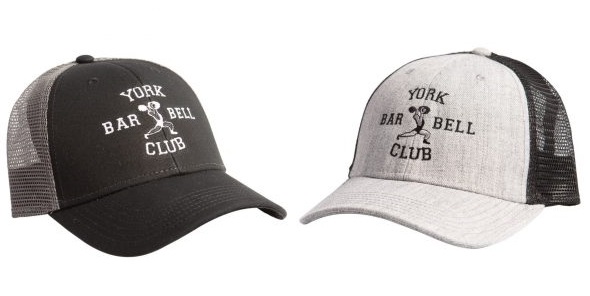 https://yorkbarbell.com/product/york-barbell-club-trucker-hats/
FLEXIBILITY: A KEY TO BETTER LIFTING
by Richard Smith (1966)
Every athlete is interested in performing better, and the weightlifter is specifically interested in achieving a higher total. There are many things to consider when a lifter is pursuing better lifts and higher totals.

The most important characteristics, in my opinion, are:
Incentive
Form
Speed
Stamina
Strength
It is an obvious fact that the lack of form and speed accounts for the majority of frustrations that a lifter faces in Olympic lifting. Needless to say, with the competition as keen as it is today, the weightlifter needs everything going for him that he can get.
Sometimes the lack of speed limits the athlete so that he does not move under the weight quickly enough. The lack of technique has accounted for many, many failures in past contests. However, I contend that in most cases the lifter is slow and lacks for because he lacks FLEXIBILITY.
In Poland, the sport of weightlifting has made terrific progress. Morris Weissbrot reports that one of the reasons for the Polish lifters' success is that the Polish lifters are extremely flexible. Each youngster is compelled to engage in some sport other than weightlifting such as: volleyball, gymnastics, track events, etc. for well over a year before he is permitted to engage in Olympic lifting. The Polish coaches realize that this preparatory training strengthens the ligaments and tendons and helps to develop a full range of motion in all of the joints. Undoubtedly, the flexibility gained from this type of training has contributed remarkably to the success of the championship Polish team.
I remember reading the story of Zhabotinsky's rise to the top of the heavyweight class. While he was ranked only 4th or 5th in his country, his wise coaches visioned a fantastic future for the young giant, but they knew that he could not reach the pinnacle of success if he remained as inflexible as he was at that point. Hence, a special trainer was assigned to Leonid whose specific job was to make the big Russian flexible. It is reported that the trainer loosened, through manipulation, every joint in his body, including each finger, before and after each workout.
Reportedly, this was not a pleasant experience at first because he was so tight and stiff, but he soon became very loose and extremely flexible. Anyone seeing the Olympic films of him in action can well appreciate the outstanding flexibility of this huge man.
1967. Start as :20. You can set the video to slow speeds . . .
https://www.youtube.com/watch?v=Aavaz8z7Osw
If a man of this size can obtain such a degree of flexibility, then surely a middleweight or lightheavy should not complain that it is impossible to "get his elbows high" or to "hit a low squat position."
Other champions take the time to loosen up thoroughly before each workout. York's Tony Garcy is an excellent example. Tony makes certain that he is completely warmed up and flexible before he starts into his training program. 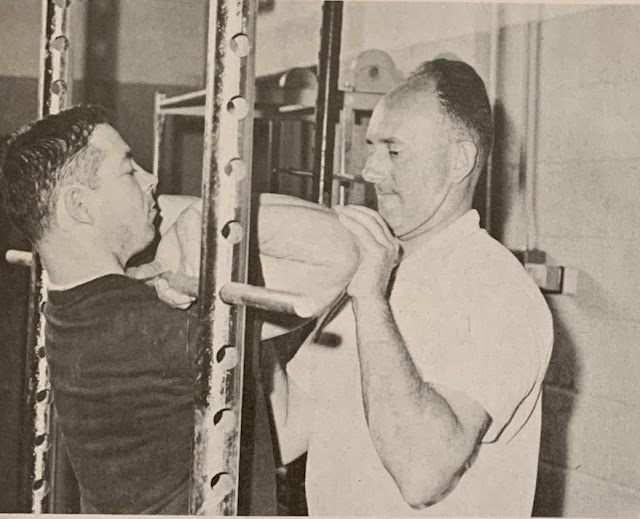 Tony Garcy, Dick Smith
So often when I suggest to a lifter that he warm up I hear the comment, "I don't have time to warm up. I only have two hours to lift and I need every minute." Every lifter is rushed for time. He needs to get back to work, mow the lawn, take his wife to dinner, see the doctor, etc., etc., etc., etc. My answer to the hurried individual is, "If you don't have time to warm up, then you don't have time to train." This bit of advice is not meant to be sarcastic by any means. It would be better by far to skip a workout than to attempt to hurry through a program without the proper warmup.
Dr. Russell Wright, the team physician for the Detroit Pistons, Redwings, and Tigers states that over 50% of the athletic injuries are due to improper warmup and inflexibility on the part of the athlete. The two go hand in hand. An athlete will not be flexible unless he warms up properly. I would venture a guess that over 90% of the injuries in weightlifting are a direct result of inflexibility.
When a lifter is flexible he not only prevents injuries, but he performs much better on the platform.
Not long ago in the York Gym, Bob Bednarski was missing snatches with a weight that he normally handles very easily. It was obvious that he was not lifting with his normal speed and confidence. When I inquired as to whether he had warmed up, he replied that he had, but that he did feel somewhat tight in the shoulders. I told Bob to start over as if he had just come in the gym. I massaged his deltoids and trapezius and after some five minutes he was snatching weights that he had been missing just minutes before, and his form was excellent. Here again it was just those extra five minutes of warming up and stretching that made the difference.
It is also very critical for the competitive lifter to warm up thoroughly at a contest. So often, the lifter gets caught up in the excitement of the contest and forgets to take the time to stretch and loosen the muscles and joints. The few minutes before the meet often makes the difference between success and failure.
At this year's YMCA Nationals in Detroit, Tommy Suggs complained that he felt very tight after his final attempt in the press. Dr. Wright happened to be there and worked with him for some fifteen minutes. Tommy evidently was relieved of his stiffness as he went out and made three very fine snatches.
Vigorous stretching is a vital law of nature and is practiced by all land dwelling mammals, except man. One can observe dogs, cats, or any wild animal as they arise from rest. They always take the time to stretch before they run, jump, and exercise. Man simply does not take the time and has suffered because of his haste.
An important point to remember is that it is just as important to stretch after a workout as it is before a training session. It just doesn't make sense for an athlete to spend two or three hours hammering away at the muscles, joints, tendons, and ligaments and then just walk away without taking a few minutes to relieve the strain put upon the body. It is immediately after a workout that the muscles are about to cramp or spasm which can lead to some very persistent injuries. In talking to physical therapists and medical doctors, they seem to feel that the stretching that is done after the training session is as critical in the prevention of injuries as is the pre-workout warmup.
It is very important to note that when I am speaking of flexibility, I am referring to TOTAL FLEXIBILITY and not just flexibility in a certain part of the body. Some are very flexible in certain areas of their body, but lack suppleness in another area. One must be flexible all over in order to be an effective athlete.
I know a lifter who can do a full split, and dislocate with a stick held at shoulder width. 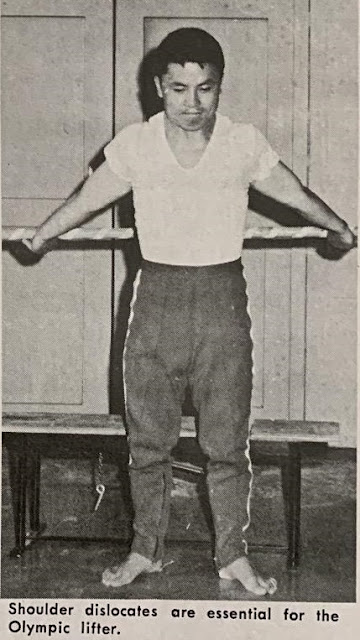 Note: Here is a basic introduction to doing dislocates:
https://www.youtube.com/watch?v=02HdChcpyBs
Many people prefer using a mini-band for their dislocates, and some like using a towel. I still prefer the broomstick.
You can gradually, gradually develop the ability to perform dislocates with a progressively narrower width grip over time. Not a good idea to force this!
Article continues: Now, normally, one would have to comment that this is an extremely flexible individual. This is true in part. Yet, this same person lacks ankle flexibility and I believe that the ankle area is one of the most important areas to be considered.
Without flexible ankles the entire body can be thrown off the center of gravity. The point I am making is that THE INDIVIDUAL IS NO MORE FLEXIBLE THAN HIS MOST INFLEXIBLE AREA.
Sure, it's great if you can touch your elbows to the floor, but if, at the same time, you have allowed your shoulder girdle to tighten, then you are only half as flexible as you need to be.
Let me speak further concerning the ankle area which I mentioned previously, because I believe this part of the body is so neglected, yet so critical to the lifter.
Lack of flexibility in the ankle can cause undue stress on the knee and hip joints and this, in turn, can place stress on the lower back and other parts of the body.
The Orientals' flexibility always amazed me. They can sit for long periods in a very low position with their feet perfectly flat. This requires extremely good ankle flexibility. I cannot recall seeing any of the well-known Oriental lifters, not the European ones for that matter, wearing shoes with excessively built up heels. When I see a lifter with very high heels it is a dead giveaway that the lifter either lacks flexibility or has some handicap in his anatomy. It should be noted that injuries among the Oriental lifters are very rare. Kenji Onuma told me that the Japanese lifters always spend from 10 to 20 minutes stretching and loosening up both before and after a workout. 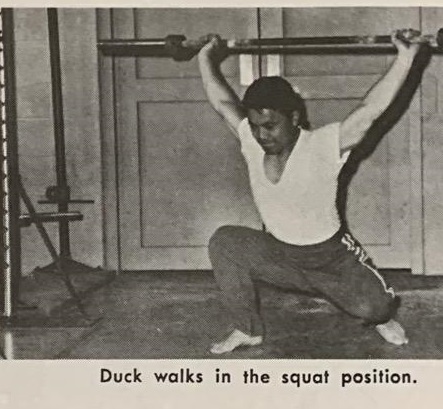 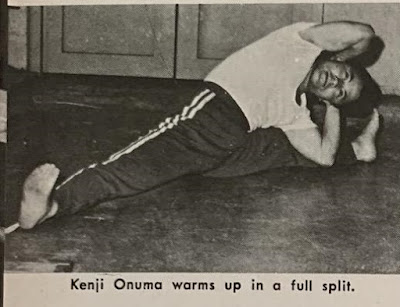 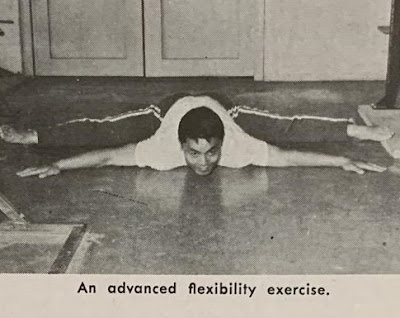 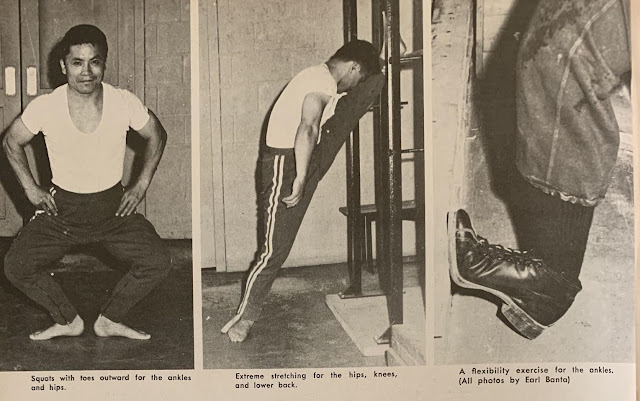 Another point of interest to lifters which I have learned from talking to medical authorities is what they call "spinal reflexes to prevent over-extension of joints." What it means, simply, is that the body has a built-in safety device which prevents the joints from going beyond a certain range. [Study Golgi tendon organ and muscle spindle for more].
When the shoulders reach a certain range of the snatch, for example, the safety device clicks and the muscles lock to that the shoulder joints will not be injured. This reflex depends almost entirely upon conditioning. That is, if you stretch and loosen the joints to a range beyond what you intend to use in a lift, then you will not have to worry about this reflex cutting your lift short.
Let me use the shoulder area to clarify this further. Let us say that in order to successfully snatch a weight you must be able to grip the bar with the hands 32" apart. Then you should stretch and loosen the shoulders so that you could actually dislocate at 26" or 28". You should stretch beyond the range of the movement of the lift itself.
A recent piece of research done by Adran Adams at San Fernando Valley State College in California also supports the benefits of stretching. The old view was that athletes, and especially football players, should not do exercises which stretch the joints. This has long been the argument against football players doing full squats. According to the study reported in the May, 1966 Research Quarterly, Adams concludes just the opposite. He says, in essence, that exercises which tend to stretch the joints serve to strengthen the areas rather than weaken them as was once believed.
As I have mentioned previously, take time to stretch, both before and after training, and be sure to loosen all areas of the body.
The area which you neglect will most assuredly be the one which plagues you in the future.
In lifting, as in any field of endeavor, it is the simple A-B-Cs that could be the missing link to success.
Flexibility may be the missing link in your case.