There's a story about Watergate conspirator G. Gordon Liddy that he once stuck his hand over a candle at a cocktail party and held it under there until his flesh started to smoke and blister. An observer asked him, "What's the trick [Big Ears]?" Liddy turned, looked at the man with his shark-like eyes and said, "The trick is not minding."

That "trick" is one that bodybuilders would do well to learn, particularly when it comes to calf training. No, I'm not suggesting that you stick your calf in front of a butane torch. I'm talking about applying some good old-fashioned willpower to your lower-leg workouts.

first of all, do you even need to add size to your calves? Take a good look at them. According to the ancient Greeks, who practically wrote the book on symmetry and proportions, your calf measurements should be roughly the same as your arm measurements.

If they are, chances are you're not one of those people who work calves as an afterthought - you treat them with the same respect you give every other bodypart. Almost invariably, people who have lousy calves do them last in their workouts, and they rush through their sets without concentration, probably ogling someone's spandex-covered buns instead of taking care of business. Unfortunately, since the calves designed for constant work and rapid recuperation, they require plenty of work and supreme concentration. 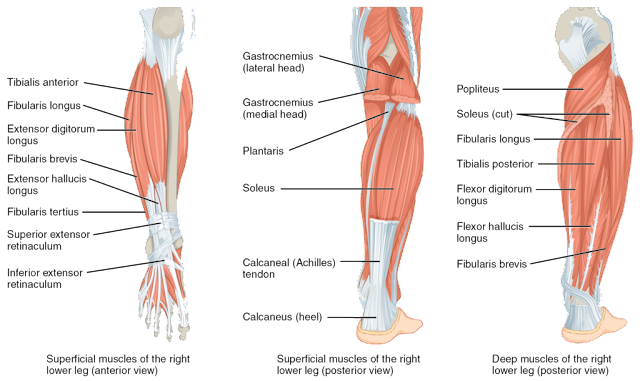 A little knowledge of the anatomy of your calf muscles can go a long way in helping you build them up.

Although the soleus is the largest muscle in the calf, it is mostly buried underneath the twin heads of the gastrocnemius. The soleus, when properly developed, gives the calf width and sweep, two qualities all bodybuilders should strive for. It is the gastrocnemius that gives the lower leg the impressive "cow heart" look most of us associate with great calf development.

The third muscle that affects the appearance of the calves is the tibialis anterior, a thin band of muscle that runs along the side of the shin. When developed, it can make the calf look almost a full inch bigger when viewed from the front.

To work the entire calf area you have to do at least three calf exercises, one for each of these muscles.

Any kind of seated calf raise targets the soleus. Standing calf raises or donkey calf raises target the gastrocnemius (and the soleus too, to a lesser degree), and front calf raises work the tibialis anterior.

These three movements form the foundation of a calf workout, but it's only the foundation. Your ultimate success will be determined by how many sets you do and how much effort you put into them. Arnold once theorized that it takes about 500 solid hours of work to develop the calves.

So what're you waitin' for?

If you've just started training your calves, undoubtedly some know-it-all has told you to vary your foot position to get all the different angles. That's a good tip - but not for a beginner. For now just keep pointing your toes straight ahead. This method develops the calves proportionately, and at this point you should be more interested in overall growth than in targeting the insides or outsides of your calves.

Always stretch and warm up first, or you risk pulling or tearing your Achilles tendon, which can take up to a year to heal. Use any standard runner's stretch and then do your first couple of sets with little or no added resistance.

As discussed previously, your routine should consist of at least three movements. Try starting with the standing calf raise, but don't overload the machine - all you'll do is work you back and maybe your quads.

The key to getting great calves is reps. Bodybuilders, with the rare exception, credit their calf development to doing lots of reps, anywhere from 20 to 30 per set. Sets of 8 to 10 using 500 pounds just won't cut it. If you need further proof, take a look at an aerobics instructor, bicyclist or someone who does a lot of rope jumping. These athletes generally have great calves, and they get them by doing reps, reps and more reps.

The next most important factor is your range of motion. It's essential to get a full range of motion when working calves. Full extension means bringing your heels down as far as they'll go and pushing off until you're way up on your toes. It's amazing how few people work their calves this way. Most are content to bounce up and down a couple of inches like a "Club MTV" dancer for 10 seconds and call it a set. It's not hard to understand why people do it that way. The calf muscles are strongest in the midrange - that's the range in which they normally operate while you're walking or running. Using a full range of motion hurts.

After performing 3 sets of about 25 reps on the standing calf raise, do the same on the seated calf. Again, keep your toes straight, about eight inches apart, try for a full range of motion and resist the temptation to grab onto the handles and use momentum to get the weight up.

Your final exercise is reverse calf raises for the tibialis anterior. Not many bodybuilders do this movement. Include it in your workouts early on, and you'll eventually pass almost everyone with your lower leg development.

Stand with your heels on a block. While supporting yourself, lower your toes as far as you can and then lift them up until you feel the muscles at the front of your lower legs contracting as much as possible. 3 sets of 20 should do the job.

Putting it all together, the session shapes up as follows:

In the beginning, two or three calf workouts a week should put you well on the way to respectable development. Since the calves are used to getting so much work when you're not in the gym, consider yourself a beginner for only two or three months. After that it's time to up the ante because chances are your calves are snickering behind your back, saying, "Heck, this ain't so bed - we can sleep through this workout."

The easiest way to increase the work load is to add more sets to your routine. Give your calves 10 to20 sets per workout. It's also time to start working them more often. Although conventional wisdom on the subject of overtraining might disagree, you can work your calves up to six times a week. Wouldn't that constitute overtraining? Perhaps, but most of the bodybuilders who have the best calves work theirs every day.

In addition to the three basic movements described for the beginning routine, you might want to include donkey raises, calf raises done on a leg press machine or one-legged calf raises. You should also employ any and all advanced techniques, such as forced reps (preferably with a sadistic training partner), cheating reps and stripping plates. When you've done as many full-range reps as possible, finish off with some partial-range reps (burns). When you finish a set, you should not be able to perform a single additional calf contraction.

At this point you're ready to start surprising, or shocking, the muscles as well. Try changing the rep range frequently while switching to heavier or lighter weights, changing the order in which you do the exercises and changing the range of motion. I know, I know - only a few paragraphs ago I heavily stressed the importance of getting a full range of motion. Once your calves adjust to that, however, it's a good idea to periodically do a shorter range just to keep them on their toes, so to speak.

Note: Try pausing in the bottom, stretch position for a 5 to 10 second count on some reps, or on all reps of some sets. Also try contracting hard and holding in the top position. Try staggered sets for your calves.

It's also time to take advantage of that hot tip you got at the beginning and change the direction of your toes on each set. Pointing your toes out works the inner calf, and pointing them in works the outer calf. Also, if you tilt your heels in the opposite direction from where your toes are pointing, it intensifies the effect.

Tricks of the Trade

In addition to the traditional exercises, there are various things you can do to help your calves develop. Try to get into the habit of massaging them after every set. If you can improve the circulation in your calves, even momentarily, by massaging them, they'll grow faster.

When you do squats, try using a two-by-four underneath your heels. This tends to put a lot of the stress on your calves that would otherwise be spread evenly over your feet.

Try to get in the habit of walking up stairs by planting your toes on the steps and then pushing off with your calf muscles. Anyone who works in a multi-story building could probably add an inch to his or her calves over a period of a year with this method.

Finally, prioritize your calves by doing them first in your workouts, when your energy levels are highest. The only time I wouldn't recommend this is on hamstring day. If you really work your calves, the pressure exerted by the support on the leg curl machine will be too much to bear -
unless you're the Gordon Liddy of Bodybuilding.

Hey, do I smell something burning?